Return to Jimland - The First Expedition 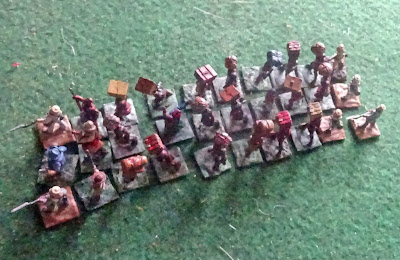 In the last week, I've played two games in Jimland, over several days
I've wanted to find out if my additional rules and amendments work without having any great impact on the way my Adventures in Jimland play out.
Carrying on from the first dozen or so adventures, my current party of three invited Maximillian Sackville to lead the expedition.
I gave Max the Scout skill, the maximum allowed save  value of "18", which left him with average shooting and melee of '5' each.

I decided to take the expedition Southeast towards the coast, looking for any rivers that could be followed, avoiding the swamps !
As part of my experimentation I' included ammunition rules, some thirty of my own Event cards and many minor rule variants were included (eg. Lakes).
With the largest starting fund I've ever had ($470), I employed 6 soldiers, 20 porters and two pack animals. There was food galore, 2 loads of ammunition, a load of medicines and four loads of trade - what could  possibly go wrong ?

Departing from my usual styles (There's a style ? - Ed.), what follows is a brief illustrated commentary of the expedition.
Day 1's results are shown in the top photograph of the Expedition, having lost three bearers and the two pack animals after a freak attack by Hailstones !   All the trade and ammunition loads were lost too!
Day two came and went without loss, despite encountering a spider nest and Tribals, unlike day three...


The fight was always going to be a bit one-sided, but they were prepared. I'm now handling Native dispositions solely on dice rolls, taking into account, where their is attack is coming from ( 1 or to sides), if they will split ther attack, whether they will be in one group, two groups or spread out, taking into account their armament too, to a limited extent.

The rest of the expedition saw no engagements, but did see a couple of my new event cards turn up, here's a brief day-by-day account:
O
rk w

With an Event of "Quiet", day thirteen sees the expedition's return to Jimland. The return journey was thankfully devoid of hostiles, but had a few tense moments as the food situation deteriorated rapidly.

Some conclusions I reached after the game :
My event cards didn't deter form the overall game although the two or three I drew were beneficial, there are an equal number of 'neutral' or 'bad' cards also in the deck.
Ammunition rules need a slight re-adjustment as the way I'd played it didn't have any great effect of the game overall, despite losing  two complete loads of the stuff.

I confused myself with the rivers and lakes rules and need to have them in front of me in the future!

My general playsheet, which is currently undergoing an overhaul is urgently needed as the current one I'm using is woefully inadequate to cope with all my new rule ideas.

The Expedition planning sheet also needs a re-think -  which is ongoing, but not finalised.

So there is quite a lot still to think through, though none of the above stopped me from playing through another expedition, the day following the end of this one!

I managed to force myself into a few hours painting ! Yep, it was a struggle (almost as much as getting prepared for the Jimland adventure), but I managed to put paint on my pack animals  and even if they're not completely finished they're well on the way !

Next week's post will probably be Max's second adventure into the wilds of Jimland.

That's it then for another week, thanks for taking the time to visit and I hope you've found something of interest and of course, your comments, as always, are both welcomed and appreciated.
Posted by Zabadak at 06:59