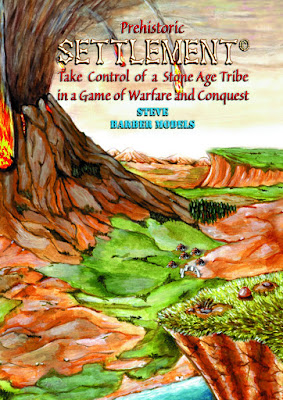 OK, so I've been taken by Prehistoric games, from well before I started this blog, looking at the few available set of rules and figures which were then available. What put me off was not the rules, as many. back then, were available and still are!
The first set I recollect coming across were the rather good looking "Prehistoric Settlement Rules" from Steve Barber, along with its two supplements, though why ten or so years on they haven't been incorporated into a single rulebook and in PDF form eludes me.
It's a four player set-up, requires a host of figures, 'buildings', terrain and at least a dozen or so animals. Matakishi Tea House showed his set-up  with everything for a game, alas these post seemed to have disappeared from his new site !
The game is a base building exercise and looks very playable with all the elements you'd expect from a decent Prehistoric game. The only gripe I have  with the game is that the food units (food is collected to build anything) are in multiple units of 25 and hundreds of food units are not uncommon. I would immediately convert 25 units to a single one and everything else accordingly. The number (and cost) of the components made this a non-starter for me (at the time) and though the 20mm figures looked fit for purpose they were soon to be replaced by 28mm figures,

I recently bought the "Battles Before Time" PDF for £0.76 from "Wargames Vault", as at the price, I thought it worth a punt. It's from a member of the Yahoo Cavewars group, but wasn't at all what I was expecting - must remember to do a little more research before plunging in.
The Cover was the first thing that made me realise I'd made some sort of awful mistake as it shows an apparent  prehistoric chariot pulled by two beasts of undetermined origin. Quickly moving on to the contents - the first thing I noticed was points! Yes, you make your force up using points and I'm no great fan of any point-based games! I stopped reading after the mechanic used for just about everything was drawing counters (stones) from a sack - I'd get pretty bored after the first half dozen times especially when a D10 could do just the same thing.
I didn't mention movement  - which is done by finger lengths, hand widths, spans etc.
OK, so it's a fantasy set of rules, there's magic, Orcs (of course), dinosaur men and lot more that leaves me cold. 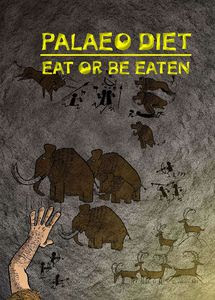 Moving on to one of the latest games on the market "Palaeo Diet - Eat or be Eaten" ( not the greatest of titles imho). I was drawn to this set of rules by many of my fellow bloggers inspiring reports of their own games.  Much of its content is reminiscent of similar games and the rules are very simplistic, using D6's, but is none the worse for it. The key mechanic to the game is probably movement, where one throws up to three dice (players choice), for the number of actions one has to use and the animals react to your successes or failures.
Other games, of course, have animal reactions (they shouldn't really just stand there and have spears thrown at them!) but the variation of the actions of both the hunters and the hunted are varied and apt for many different situations, such as the presence of fire or shouting etc.
So, being taken with the game, I've ordered the four Caveman sets from "Copplestone" (via North Star of course) and I'm now looking at further orders from, Arcane Scenery and Steve Barber for the animals, but there's no reason why I can't try a practice game using what I already have for 'Jimland'.

There are several other sets of rules out there, "Tusk" is now available in PDF (and now much more attractive), sounds very similar to others, but the Lost World type of game with guns etc. put me off when I first looked at these rules (and it wasn't the all-singing-all dancing glossy version).
"Saurian Safari", I also looked at, but again Dinosaur hunting by men with guns doesn't really get my juices flowing.
There are several other rulebooks out there, that all have their pluses:
I'll obviously be posting more about this genre as I put together this project, but I haven't got a target date in mind and I'll write a more comprehensive review of Paeleo Die tin a future post.

In other news, I've had a renewed interest 'Adventuring in Jimland' after interest from a fellow blogger and his interest in participating in my game. I have a lot of ideas, stimulated by his input, but nothing concrete yet, though the old brain is working overtime thinking all my ideas through.

So that's it for another week, thanks for taking the time to visit and as always your comments are welcomed and appreciated.