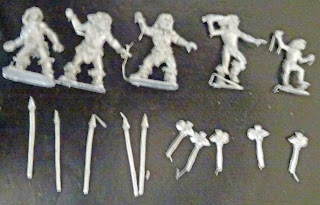 I have manged some progress with my prehistoric loot, but only just after another week of nearly complete lethargy, during which I also started a building, then abandoned it as I thought that more thought  was necessary to give the building a little more life from it's dull 'flatness'.
I'm petty sure most, if not all reading this will be aware of the  'Copplestone' cavemen series of four packs,  Yes, they're a bit Hollywood, but I like them for that.
Heres' a few pics of the packs and a few comments .
The first pack (above) contains five minis, the younger chap has a flint kife and the boy has a stone (flint hand axe ?). It may look like the latter has a sling, butt it's flash as they've just come straight form the packet. Five figures, five weapons ! 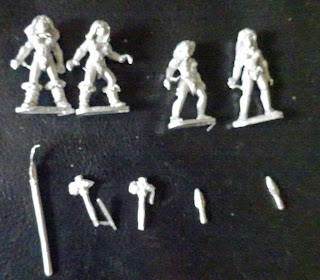 Next pack, four women, five weapons.
Why one of the women id bare-breasted is beyond me (not that I'm a prude or anything), but it does seem unnecessary, even though I reckon they'd all be completely naked in a warm climate! 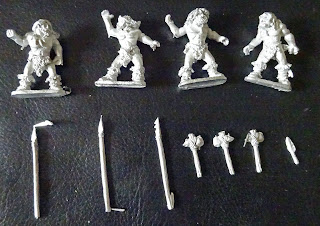 Next pack four figures, seven weapons, including a spear with some form of bone-type 'point' (any clues would be appreciated).
Not a spectacular pack, but the arm positions do mean that both axe and pears look OK in their hands.

The last pack, the 'characters', give the range the only bow armed figure, an antler figure without facility for holding a weapon, another figure wielding an axe (not much choice there about what he;s using) and finally 'Two-Feathers', holding a stick!
I've converted "Antler man" and "Stick man" to something I thought more usable. 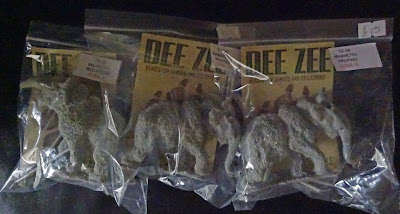 My purchase form "Arcane Scenery" (best delivery time ever) was their Mammoth deal, but I wasn't aware they were kits, needing assembly of tusks and tails!
Neither was I aware that they were resin and even though it doesn't bother me that much, there were some mold lines that needed removing.
The tusks are long sausages of lead that needed bending and the mammoths'  sockets for their tusks also needed drilling out., needing a trip to the local Hobby-craft store for a new set of miniature drills!
Other than unpacking my recent purchases, converting a couple of figures, adding weapons and assembling mammoths what else have I done ?
Well, the answer is not much, but I have based them all and undercoated them, with what I thought was white but turned out to be grey! (Age, poor eyesight and Hobson's choice)
I'm still awaiting my order from "Steve Barber" and it will have been two weeks tomorrow since I ordered them, but in the meantime I'm working out my next order to "Arcane Scenery" and even though I have more than enough humans, I do like their Cro-magnons.

Sorry about the more than usual blurred pictures, but when you pay peanuts you get monkeys and of course,  the photographer has been sacked !

That's it then for another week, thanks for taking the time to visit and as always, your comments are both welcomed and appreciated.
Posted by Zabadak at 04:34