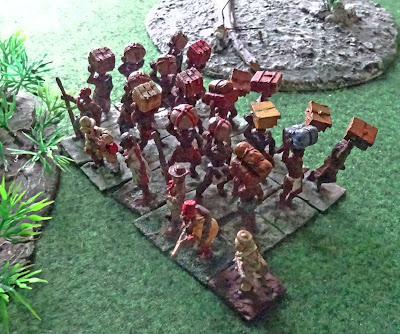 After the highs of the Border Reiver show, I'm once more back in the real world where gaming an my enthusiasm to do anything hobby-wise is once more at an all-time low. It must be well over a month since I have managed anything hobby-related, save for writing this blog!
Picking up then where we left the expedition, in grasslands, readying itself for another scrap...

Once more:
From the Journal of Frederick Cartington


"Once more we were set upon by hostiles, but with adequate warning we braced ourselves for their attack"


"The fight was swift and furious though our shooting was less than adequate. The melee in the rear of our firing line dispatched  two of our opposition aided, I'm told, by a serpent that we also dispatched.
That mighty creature, a forest dwelling gorilla also made an appearance but as it left us alone, we too left it alone!"
"As we made camp, less than two weeks had passed since we left Jim's landing and with more than two week's food available, we determined to press on"
"it was two days before we managed to get going again as fog descended upon us making further progress impossible, but eventually the fog gave way to excessive heat giving grave concern to our Doc."
"it was a mere four days since our last encounter that we were  ambushed by some roguish fellows that gave us a  very hot welcome"
"A rapid charge into the enemy threw them off balance and they were unable to use their very effective rifles, but even as the fight died down poor Ebor was struck down by a bullet, our third casualty of the day"
"Doc was unable to save any of our wounded and I made the determination to return to Jim's Landing. Several great apes we saw en route was indeed new primate species of several types, though the didn't take much notice of us and we arrived without further incident."
The expedition had taken 18 day's (in game time) and made an incredible (imo) 470 points of discoveries etc. which would have been enough to give four explorers a point increment each (in a single ability), alas the last encounter was gruesome as we had lost Ebor (and of course poor Ned), leaving us with only three explorers. I think the  game took about four hours to play out over two (or maybe three days). It certainly took a lot longer to edit the photos (over 100!) and write up the adventure.
Was it worth it ? At the time probably yes, now I'm not so sure.

My enthusiasm has been sorely dented, I have unused armies, many unpainted figures, several buildings that I'd like to have built and some building kits that may never see the table.

Thanks for taking the time to visit and apologies for the despondency, but as always your comments are both welcome and appreciated.

Goodness only knows if I'll be able to find anything to post about next week, I doubt if anyone will be interested in yet another hospital visit I have to attend (tomorrow!).
Posted by Zabadak at 07:18