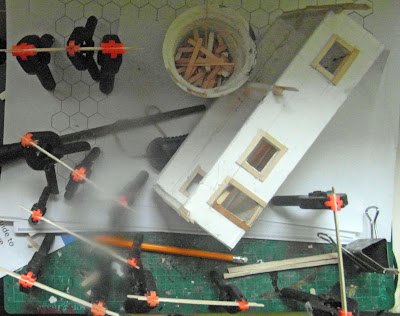 Earlier this year, or possibly late last year, I showed the photograph on the right as a 'tease' of a work in progress.
Obviously a building of sorts, using foamboard and coffee stirrers (of course).The reason behind the building was to have a backdrop for my photographs of expeditions leaving Jim's Landing into the wilds of Jimland.
I started the model sometime in October 2017, worked on it up until late November and then if memory serves, it was shelved as yet another unfinished project (and still is). 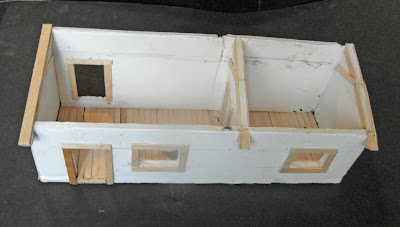 As I haven't managed to do a single thing  hobby-wise for over two months, I've dug this little project out to pad out my blog!for something to post.
The building on the left is a simple foamcard  model, representing an adobe style 'v' roofed building (note the roof 'joint' in the top right corner of the building), though it appears to have a lean-to roof!
The reasoning behind this building design is that it was meant to represent an earlier structure, to which  a later, larger structure was added as Jim's Landing grew in fame. 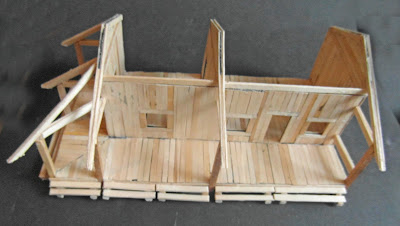 The additional structure would be entirely of wood, giving a noticeable contrast between the two parts of the building.
The front of the building half is seen in the photograph on the right.
The walls are card, with coffee-stirrer cladding for planking and notice that there is no back wall, as this will be formed from the wall of the piece above.

So it's about 95% finished and I can hear the murmurs of "why wasn't it finished ?'  etc.
The simple answer wasn't that I was bored with it at the time, nor did I run out of enthusiasm, but I was frustrated that I couldn't fond a way to pain it to my satisfaction. I'd tried various techniques on a spare piece of paling fencing made in a similar style, materials and so on, but to no avail. Painting wood to represent wood shouldn't really be that difficult, but it beat me at the time. Finishing the roof on the other hand, I have had plans for for some time and know how I'll be finishing it (if I ever return to this project). It won't be planking, shingles, tiles, turf, grass or thatch either!

So that's the post for this week then, like many others that dig out their old stuff I too have fallen back on this measure and it wasn't even the post I had intended to write about, but as this model sits on a shelf staring at me daily I thought I'd give it a new lease of life. I also bought the shader stuff at the last show specifically to see if I could use it on the wood of this model!

That's it then for another week, thanks for taking the time to visit and as always, your comments are both welcomed and appreciated.
Posted by Zabadak at 08:18