So after my last post this last week has seen me become incapacitated as the week went on resulting in a trip to the Doctor's and thence to a clinic for X-rays. Nothing too serious but I am still awaiting the results! Averaging about 2 hours a night sleep due to pain despite many, many painkillers I have been unable to make any progress with any of my current wargaming projects but I have managed to take in a few zombie films  as this activity require little movement and if I did fall asleep during them, then it was a bonus!
I've also recorded all my scores and view on these on the DVD film and media page too.
In no particular order here they are
: 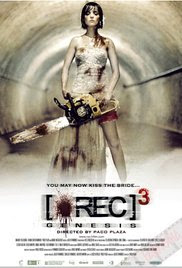 A couple's wedding day turns horrific as some of the guests start showing signs of a strange illness.
The film is setting is the wedding of our two heroes  and you just know it's all going to go to shit when the Uncle (there;s always one of 'those' uncles at any wedding right?), with a bandage around his wrist and complaining about a dog bite. As well as 'the uncle'  it has many of the tropes we've come to expect in zed films. like the chainsaw wielded by the bride in the poster to the right.
"Spanish with Subtitles" - Despite the subtitles and not having seen the first two in the series  (this purports to explain much of the first two films' mysteries) I enjoyed this and it did have a good surprising (imo) ending).
Score: 3/5 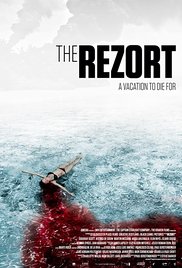 "The Rezort" (2015)  The ReZort, a safari park, offers paying guests the opportunity to kill as many zombies as they please following an outbreak.
A dozen or so guests of various dispositions (from students to obvious hunter types) are given the chance to use the weapons they wish and after some training are taken out on a Zombie Safari, protected by electric fences etc. at night. what could possibly go wrong?
I did wonder how they maintained a zombie population from an earth otherwise clear of zeds, but all is answered.
An above average film and well worth a look just for the idea of a world after the zombie outbreak.has all but concluded.
Score: 4/5 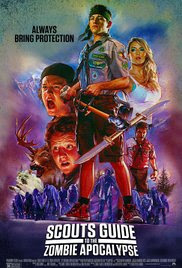 "Scouts Guide to the Zombie Apocalypse" (2016)  Three scouts, on the eve of their last camp-out, discover the true meaning of friendship when they attempt to save their town from a zombie outbreak.
I watched this film well over a year ago, but never managed to write it up so to speak, though It was well received on the now-defunct Board of the Living Lead/
Though presented/portrayed as a zombie 'comedy',  (a theme  which I don't normally like) it was much more and well above average. The few comedy elements were well done and suited the nature of the film overall.
Maybe a tad low on budget little low budget it did what it said on the tin (kinda)
Score: 4/5 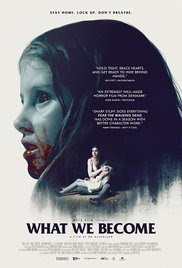 "What we become" (2015)  A family of four is quarantined in their home as a virulent strand of the flu spreads into town and they are forced to the extreme to escape alive.
If you're looking for ideas for the start of a zed campaign then this film has some great ideas. It's Danish with subtitles but doesn't suffer one bit because of it.
The story-line has a typical family stuck in their house during the inital stages of an "outbreak", but with a new neighborhood family giving a love interest to the boy of the first family and another neighbour with a rifle, it all makes for a n interesting and believable scenario.
Possibly the best of  my recent viewings with all the elements I like in a zed Film - little humour, slow zombies and survivors that aren't superhumans.
Score: 5/5 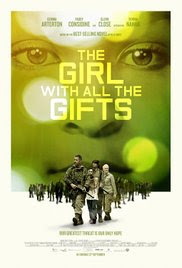 "The Girl with All the Gifts" (2016)  A scientist and a teacher living in a dystopian future embark on a journey of survival with a special young girl named Melanie.
The dystopian future is seemingly not to distant as London is easily recognisable as are weapons and vehicles'
Possibly one of the biggest budget films I seen since "Zombieland". It gets off to a slow start put picks up the pace quickly before the initial setting becomes overly boring and repetitive.
There are some good surprises in this film and some great acting by both Gemma Christina Arterton and the sublime, Glenn Close  and a surprisingly fresh take on the zombie genre. Well above average production values.
Score: 5/5 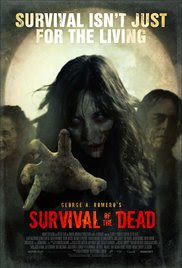 "Survival of the Dead" (2009) On an island off the coast of North America, local residents simultaneously fight a zombie epidemic while hoping for a cure to return their un-dead relatives back to their human state.
Just the title of the film probably labels it as Romero film and is the usual fare you'd expect from a George Romero film.
I've had this particular film under wraps for several years and was sure I'd already seen and reviewed it.
It's a fairly typical of a low-budget zed film that can be ground out relatively quickly imo with a somewhat unnecessarily (imo) contrived plot line and no more than average acting (though with one or two exceptions) - and the Irish accents grated on me after a while. too.
Nevertheless it was good fun  and definitely good pop-corn material for those rainy days.
Score: 3/5 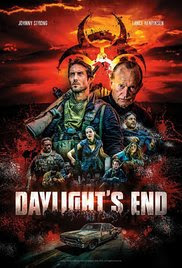 "Daylight’s End" (2016) Years after a mysterious plague has devastated the planet and turned most of humanity into blood-hungry creatures, a rogue drifter on a vengeful hunt stumbles across a band of survivors in an abandoned police station and reluctantly agrees to try to help them defend themselves and escape to the sanctuary they so desperately need.
This film has a slim but almost believable plot line  but given the situation of the survivors I'm sure a small bunch of zombie gamers could do a better job than the current incumbents in their role.
The film has an interesting take on their zombie, one which took me a while to figure but also one that varied wildly from the 'canon'. I doubt if any gamers would their version of zombie, but they're interesting nevertheless.
Fairly fast paced with lots of action with an interesting twist or two along the way.
Score: 4/5 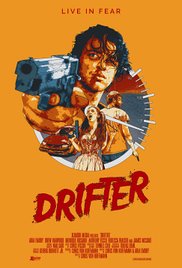 I also accidentally watched this post-apocalyptic film called "Dead End" (2016) though in the IMDB is labelled as "Drifter" (strange choice I though as there are two main protagonists).
The story is weak and what action there is is mostly predicable and ponderous tending towards the horror elements rather than any PA element.
I'm mostly biased though against PA films (I'm probably one of the few who have NOT liked a single Mad Max film) so don't take my word for it.
I'd score it as 1/5 if I scored PA films, but I don't, so i won't (oops) and I resent that it's 90 minutes out of my life I won't get back!

That's it for this week and I haven't forgotten  the promise I made to show the meagre Border reiver loot, but that'll have to wait until another time as I'm now in  need of yet more meds!

Thanks for taking the time to visit and as always your comments are both welcomed and truly appreciated.
Posted by Zabadak at 09:02