I managed to finish the Villagers pack from Col. Bill's this last week  and whilst mine  are not as display-case worthy as those in the shop , they're food enough for my own purposes.
They were bought to pad out any village scenario in my pirate project, and although they are far more suited to the supposed beginning of the "pirate era", they'll serve well enough for the entire period imo.
The three women in the pack are a bit of a mixed bunch, when it comes to purpose.
The two women peddling their wares (ooh err missus) are great additions and wouldn't look amiss in many different eras, though I didn't like that I had to glue one of their platters to them, (no-one told me that modelling/assembly  skills were required) though it was not mandatory to have it  so.).
The centre figure in the photograph to the left is wearing a "Scold's Bridle" (look it up), which even if vaguely amusing, is a waste as I'd much rather have had a plain figure, but that's just personal taste.

Next up are two of the men whom I believe to be well suited as civilians of the period. (the flash on the camera seems to have made the chap on the left rather bleary-eyed though!)
The chap on the right looks nothing like the chap on the web site, as their one has both his hands clasped on his cane.
My version's left arm (a detached piece) wouldn't fit in that position easily and if it was just left hanging down his side it would have reached below his knee! (a scale four foot long arm).
I chopped the hand off the arm, re-modelled another  from the stump, crooked his arm slightly using pliers and glued the new length arm on the figure, 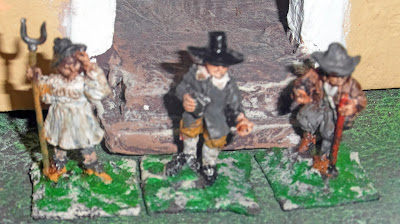 "A yokel, a Priest and a beggar walk into a bar..."
The the final three are a stereotypical country bumpkin, complete with smock and pitchfork. Whilst the pitchfork is great the smock I'm fairly sure is more late 18th century than the 17th/ or early18th century, but it doesn't matter to me as he's a cracking figure.
The chap in the middle  looks very church-like but is dressed as a fairly typical 17th villager. 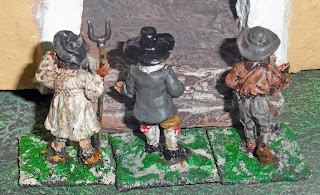 When painting him I though he had a flagon in his right hand, but it turns out on close inspection of the photograph that it is in fact a book! (making him even more likely to be destined for the clergy).
The third chap looks shabby (not difficult with my painting skills) and I think is meant to be a beggar, I like this figure a lot too.
Overall they're great pack of figures for the price (£1.25/figure), though they should come with a warning that some assembly is required!
In other news, I now have three of my four new terrain boards finished to my satisfaction (the harbour one needs  more work doing to it); I've been preparing my next three posts (I've never had so much material to work with) and I'm working on some new rough terrain pieces ready for my first solo foray into "Jimland".

So that's it then for another week, thanks as always for taking the time to visit, whether accidentally, to just look at what passes for eye candy and of course you comments are welcomed and appreciated.
Posted by Zabadak at 07:04