Yes, I know that this is meant to be a blog about Zombie gaming, but generating interest from anyone else has proved less than fruitful and as I have found that solo-gaming isn't for me I have been looking to finish off some old projects, my Pirates being just one of many.
The task of finding where I'd stored my pirates was frustrating as I found one drawer of them quickly but the second (and the majority of my collection) took a bit of detective work - I guess I really should label all my storage!


The first box contained about ninety figures and I was pleasantly  surprised to find that amongst all the pirates wielding various melee weapons and firearms I also had a sprinkling of figures that could be (or maybe were) civilians, amongst them some women who would do well as serving wenches, servants and governors daughters!
There were of course several figures that were obvious destined to be gun-crew and a couple that were helmsmen, standing with arms akimbo. 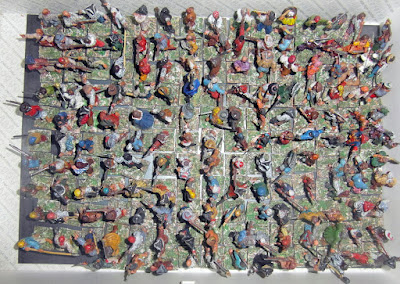 I was delighted to eventually find the second box, hidden in plain view in a box file along with several others (all unlabelled of course)
Contained within the box was the same mix of figures as the first only more-so, there being some 160+ figures.
All the figures are based on 20mm square bases (and I have no plans to change this either) and have a 20mm magnetic base added too. They all sit snugly on sheet steel and don't move about much - probably much to their chagrin.
These were all painted at least fifteen or more years ago when I could just about see what I was painting and I remember not being happy with my attempts at the colour of their bases, though I am fairly happy now.
The figures are: a mix of Redoubt (the first I bought); a large number of Wargame Foundry (though for some reason not the Treasure Island set - a choice  I regret); a lot of Eureka pirates - purchased from Irregular Miniatures iirc and a sprinkling of Ral Partha. Of course I can't really distinguish which is which now.

What is not noticeable from the photographs is that that these have all had a gloss varnish applied to them (I think), but it has lost a little of its sheen over the years.
I'm also sad to have to say that sadly these figures have never been used in any games, not a single one! The sepoy/mutineer that I spotted within their ranks has undoubtedly been used in an Indian mutiny game or two and he will be re-deployed to his correct storage with his other comrades.
So although looking a little worse for age and in need of a good dusting off, they're still usable.


As I strive for something to blog about, please don't be surprised if I fall back to showing more photographs of these, I may even be able to drum up some enthusiasm among the few (the very few) potential opponents.


Once more, that's it then for another week, thanks for taking the time to visit and as always your comments are both appreciated and welcomed.