Despite feeling a lot better this week (hurrah) I didn't get as much done on this model as I'd have liked, probably due to being bored with this build and of course the wall to wall football.
Nevertheless progress has been made, the main assembly work has been done and necessary little bits and pieces have also been fixed.
Assembing wasn't as ticky as I thought it would be and all the pre-cut bit seemed to fit together with only a single hiccup (the rear wall) delaying the whole process slightly.
I started the assembly with the tower and progressed to the diagonally opposite corner of the main building with the roof being the lst addition. The walls and entrances were then made to fit.
The photographs tell the whole story


The internal behind the facade also had to have a the hole for the oriel cut into it of course before final ssembly. I decided to have a simple cross frame in the hole, mounted on a piece of perspex.
The photo on the left shows this (along with the  missing tower hatch - another one of those niggly things that are simple to do.


The 'major'  building work this last week has been the two entrances to the church grounds.
These are simple arches, made more complx by adding some decoration to them.
The photograph shows the 'detail' I added, simple enough and probably the last time anyone will notice it. The arches were based on the front door cut-out and were built up using foamcard, card, coffee stirrers and matchsticks.
These were then glued to the top of the walls and reinforced by the addition of pieces of card for strength.


The churchyard walls were all capped with thick card, slightly wider that the two thicknesses of foamboard making up the walls.

The top of the tower also needed finishing off and rather than copy the domed roof of Gary Chalk's original I went for a tiled pyramid.
I drew a net of the pyramidal structure out on card  and added the stepped tiling as I done with the roof.
My first attempt didn't look right, it was too tall and the base didn't look big enough.
Another was made and looked much better.
The ridges on the tower (and the main church roof) have yet to be added.
The internal roof supports were carefully aligned with the internal walls (where the roof would rest upon) and clamped in place. Half the roof was then glued on and when dry the whole roof assembly was removed; the second half of the roof was then glued in place.
The roof has a folded piece of card across the ridge,joining the two halves and the final strip of tiles has also been added, but like the tower, the ridge tiling has yet to be done.


Here's some more views of the progress so far: 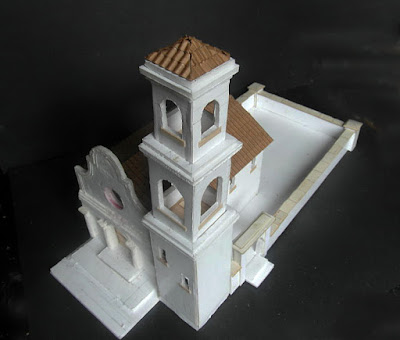 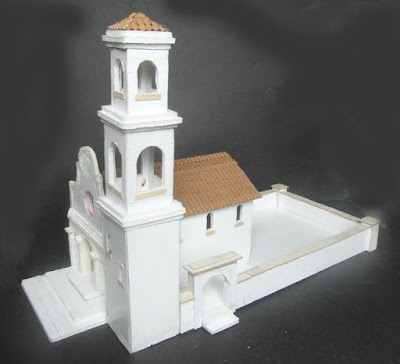 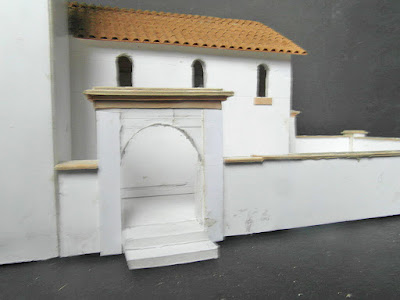 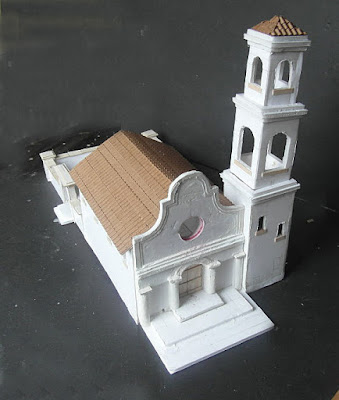 There still a lot to do on this model before I think about painting it; I intend having a small room fixed to the rear of the church. I also haven't decided how to fill the rather large boring churchyard at the rear, maybe a fountain on some form of arbour. - I certainly won't be using it as a graveyard (still makes me laugh when I see model graves wrongly orientated).
I've also had to do some research on what to include internally and I'll be going for an altar (fairly obvious), a confessional, a font, a pulpit (and/or a lectern) and a few pews.
All the roofing has all the ridges to tile too and I'm sure that there's a host of other things I haven't though of yet!

Once more, that's it for this week thanks for taking the time to visit and as always your comments are appreciated and welcomed.
Posted by Zabadak at 06:15