No doubt you'll be thinking that a few photographs of a staircase glued into place would be the inevitable boring conclusion of this mini-build.
These were also my thoughts exactly, so I decided not just to glue it into place but  to give it a little more interesting detailing. The objective was two-fold  as it allows me both to show some of the crap scrap materials I use and how easy it is.
Though I may not use everything  in the photograph (to the right) I tend to try and have more bits and pieces than I'll probably need.
So, there's polystyrene (foam variety), a couple of cylinders, an oil drum, some tissue paper, printed signs and stuff and  some string. and some blackened coffee stirrers (yes I  am sad enough to have some of these  already done)

The objective was to model the underside of the staircase as a rubbish dump.
I broke the polystyrene foam into bits and tucked it into the holes created by the bracing on the stairs. (This was all done whilst the model lay on a flat surface ) . Next the foam was glued into place using pva, finally a layer of scraps of tissue were placed over the foam and then wetted with an old paintbrush, tucking it into corners etc. with the overall objective of just hiding the foam. The various crevices etc. would be filled with rubbish.
A very quick (and imprecise) coat of various dull paints (browns and green) gave the underlying base some colour and it didn't really matter if there were specks of white left.
Next the rubbish was placed in (not completely randomly as everything that is placed has to be seen otherwise it's a bit pointless adding it ! Most everything went in randomly and sat on top of the base, though a few bits were strategically placed in crevices on underneath bits of the base where it overhang. I also had to make a few black-plastic rubbish sacks to add to the pile of rubbish. I may well have run out of these and may have to make a whole batch more.(The half a dozen I made took about 5 minutes.)
The next three pics show the whole thing in situ; the rubbish base also acting as a very strong support to the staircase being glued to the building. 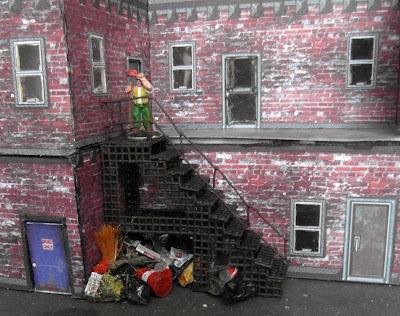 The final photograph showing the staircase in context.
I did have a thought that if I'd made the steps an additional 5mm deep (making them 15mm x 30mm) then a figure on a 20mm base would comfortable stand on it with the part of its base tucked underneath the step in front.
No doubt the more Poirot-like among you will have spotted the health and safety failing that the upper walkway hasn't got a safety railing - well that's already been spotted. I'm currently wondering how to fix one securely to a very thin piece of card (the floor).

Thanks for taking the time to view I hope this bit of rubbish was of interest.