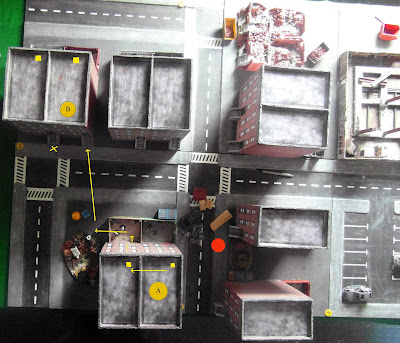 The photograph shows the various key features  for this game. The yellow arrows indicate the intended route to house 'B' for the two starting figures and the three other figures trapped in house 'A'. The latter will have to make their way to the top of the building, across the roof, down into the adjacent building and finally out the back door before following the path of Jerome and Washington. The Red marker  shows the position of a large group of zombies, other zombies are only generated by noise in this scenario.
Other details can be found in last week 's blog. 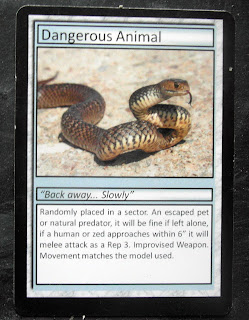 To the Safe House !
Turn one turns up the first event, a dangerous animal !
I determine this to be a rabid dog and randomly determine where it is on the table.
Luckily it is in an area well away from the action, near the read skip just behind the construction site, well out of site of the zombies and Jerome's gang. 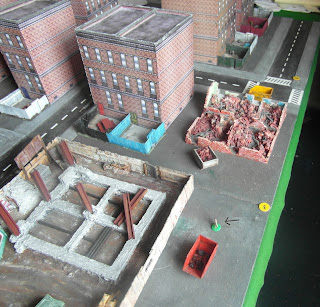 Jerome and Washington start making their way to the 'Safe House', but the other civilians and the zombies are both inactive (they threw 1's for their activation) 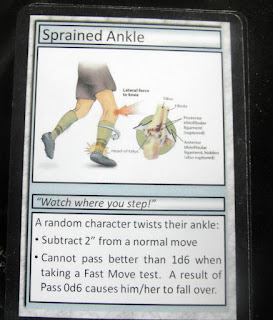 Turn 2 springs a second event this time resulting in Jerome  having 2" deducted from his movement for the rest of the scenario (a 50% chance as only the two characters were moving).


The other gang members currently hiding remain hiding whilst Jerome hobbles after Washington who moves ahead to check the safe house door. I determine to keep Washington within the 4" command range of Jerome so he won't get too far ahead. 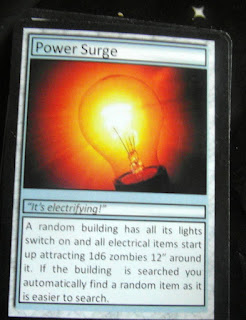 Turn 3 and yet another event  !
(I decide to change the event die next turn).
The event turns out to be a Power Surge and when randomly chosen, it turn out to be the building just behind the construction site, furthest away from Jerome the cripple and not within 12" of the zombies, so at least it didn't have any immediate effect.


Washington gets to the door of the Safe House and surprise, surprise it's locked (he needed a double '1' on 2d6) Jerome continues to shuffle along to the bottom of the steps.
None of the other three hiding back in the HQ decide to do anything other than to continue to hide.
Switching the event die for another there was an event-free turn which saw Washington catching up with Jerome as they moved on to the adjacent house.The continued to hone their hiding skills and stayed put whilst the zombies did zombie things, most likely moaning about doing nothing.


Washington reached the door, whilst Jerome waited at the bottom of the steps in another event-free turn and the door was tried, needing a '1' to be unlocked and amazingly I managed to throw a '1' - onwards ever onwards !
Jerome was ready to throw caution to the wind and have Washington enter the next turn when yet another event forestalled the action ! 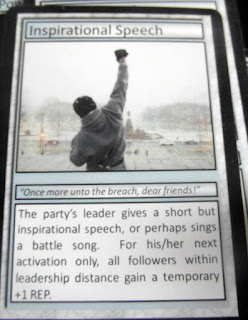 Even as Washington entered Jerome hobbled to the top of the steps giving an allegedly inspirational speech, (probably in hushed tones).Washington seemingly ignored it as he entered the building, leaving Jerome on the top step outside.

I would be treating this type of building as three possible encounter areas, one for each of the three floors. All have the possibility of there being zombies, civilians or gangers present and even the slight chance of there being nothing at all.
The 2d6 were throw and coming up snake-eyes resulted in the ground floor being declared devoid of the living (and the un-living).
Needless to say the "hiders" were getting very proficient at hiding whilst the zombies were equally boring.


Washington waited for Jerome to catch up whilst Jax in the HQ building decided to have a peek out to see if the coast was clear (he went into "duck-back" mode) and the zombies did their zombie thing, With no event and little else to show for this turn, it was on to the next turn.

As it had been a long time since the last event (2 turns) the
dice decided that it was time for another...
And so it was that Jerome and Washington became inseparable buddies(at least for the rest of this scenario) and as their initiative die indicated they wouldn't be doing anything else this turn (the gangers threw a '1') we can only imaging whether or not they were looking into each others eyes, holding hands (*shudder) or just giving fist-bumps and manly hugs!
Jax however, operating on a civilian initiative die roll (not currently being under Jerome's influence) once more passed the necessary dice roll to be on his way; following Jerome's route up to the roof, across the roof and down the stairs to next door, he should be joining them in the safe house in a dozen turns easy! The other two were obviously  not inspired by Jax's enthusiasm for the journey into the unknown  and remained hidden.
The zombies carried on doing nothing and probably moaning about there being bored and having nothing to do,

The next turn wasn't much better, but at least there was no event, Jerome and Washington continued to fail their initiative roll and stood in some sort of bromance trance whilst Jax made his way to the middle floor of the HQ whilst Patience, also in the HQ, decide to have a look at what was happening (now at Duck-back)
Back with Jerome and Washington on the next turn the two bf's moved up to the second floor to be faced with three zombies.
The zombie surprise rolls were both in their favour, the zombies managing a respectable 7 (three zombies plus a die roll of a '4') whilst Washington with his initiative of '5' threw a '4' giving him a nine; Jerome cam a close second having an initiative of '4'and also throwing a '4'.
The gang of two decided against shooting (and attracting the zombies outside) and readied  their long-arms to use as clubs in the inevitable zombie charge.
The zombies 'charged', two attacking Washington and one attacking Jerome . Three zombie dice against the seven dice of Washington and the 6 dice of Jerome were a bit of a mismatch and the three zombies were quickly dispatched, Second floor cleared !

Jax continued his way to the roof whilst Patience remained in her duck-back state.
The next turn thankfully, had no event as Jerome and Washington made their to the top floor, encountering two civilians there. Before throwing for the civilians characteristics, armament etc, I decided that diplomacy was in order on the gangers part and they would avoid confrontation (and possible gunfire) with an attempt at a meet and greet.
Bunny and Claude, it turns out were both armed with pistols and one was quite a reasonable shot (a '4'), both both lacked any real leadership skill (they were both '2's). Even so the Leadership skills of Jerome couldn't make any headway into convincing these two to join in their foray into the unknowns of the safe-house next door and they all exchanged pleasantries instead.
Patience, having decided nothing was happening returned to hiding (just to be sure no doubt) whilst Jax made his was across the roof-tops to the hatch on the next building.
Over the next couple of turns Patience once more went into look around mode (duck back) and whilst Jax made his was to the ground floor of the building he was in, Jerome and Washington made it across the roof-top to the safe-house hatch.

It was now six turns since the last event and I was getting a bit twitchy as Jax finally made it to the outside.
Leroy who had been intent on becoming a world-class 'hider', decided to enter the now popular "Duck-back" mode whilst Patience decided that if Leroy wasn't hiding, then she would.
As they dropped through the hatch, Jerome and Washington couldn't see the four zombies that were present (the zombies had failed their initiative anyway). However the chance of a welcome break from the tedium stirred the zombies into action. This time, whilst Washington still came out tops with a 'surprise' total of 4, the zombies came a close second with '9' whilst Jerome could only manage a '6'. Washington charged into the fray, killing his target whilst Jerome hobbled towards his, only managing to knock it down !

And that's where I'll leave it for his week, and not only because I'll have something to blog about next week! Suffice to say that in game turns at this stage I'm less than half-way through the write-up!
Even so, next week should see the conclusion to this scenario.

I've also posted my latest blog on my Gladiator Project here (all the posts were written pre-April this year) and I've only got one other prepared! I'll be posting about how and what stage I'm currently at with this project very soon.
Posted by Zabadak at 01:35