Towards the end of June I was host for a week or so to a fellow blogger, whom a few of you may recognise from the photo.
He was here mainly for some work experience at a week-long archaeological dig in County Durham, but no doubt he'll be telling you something about that on his own blog sometime in the near future (but don't hold your breath as the rumour is that he may have a job.
You can find his blog here

I was duly restricted in my blogging activities (but just a tad) due to his occupying the bedroom wherein my desk-top pc resides and that I use to write my blog, edit photographs and update my post-game rule amendments and so on. He was of course most enjoyable company and a welcome chance to talk about wargaming and most anything else we could think of. We also had a great day out into Northumberland; visiting Berwick upon Tweed and walking around the town's Vauban-style walls as well as attempting to find some WWII bunkers (pillboxes) on the coast near Dunstanburgh.

After a lunch and a walk around in Berwick we set off to find finding the bunkers that were shown on maps indicated in a small booklet he had received. This turned out to be harder than  it should have been considering there were many maps indicating their relative positions. However we may have just as well been following a blank map with 'Xs' randomly placed on it as the maps bore little resemblance to where we eventually found the bunkers. 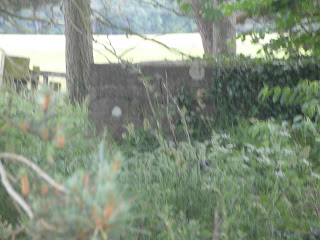 In the little village of Embleton there were three such bunkers, the one above carefully camouflaged by the ravages of time, too half an hour to find, despite us parked less than fifty yards away from it.
The second was again overgrown but nevertheless accessible .
Having now got our 'eye' in so to speak we proceeded to wander in circles looking for the third bunker in the village. 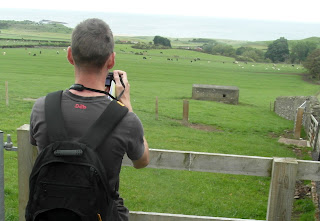 The third bunker proved to be quite elusive, as it wasn't actually in the village at all but was on the outskirts of the village facing the sea and an obvious landing spot.
This was on farm land and we didn't try our luck proceeding further.

We then  proceeded down to the coast to the last bunker I visited, which even Blind Pugh could spot.
This was on the edge of a hillside to the right of the bay above.


The intrepid defender of said bunker decided that retreat was the better part of valour and duly retreated towards Dubstanburgh castle to explore several more bunkers en-route solo.
My son and I also retreated, to the very friendly Golf club-house to indulge ourselves in some well deserved beverages.

During my house-guest's sojourn, surprisingly enough we actually did little in the way of playing games, though we did indulge in a brief affair with SAGA (my #1 son's latest 'flavour-of-the-month' fad) which was very enjoyable and I could easily be swayed in to assembling a small army of Anglo-Saxons or Vikings (all contributions welcome). we also played several games of Space Hulk (of the the original Ed.1variety) and despite many many a cock-up with the rules we did have a good laugh. I'd forgotten just how much I enjoyed Space Hulk!

I have been quite busy (for a change) on the hobby front, but that's it for this week,
(My other blog's post this week is on Arenas and can be found here.)
Posted by Zabadak at 04:17