Return to the Burbs(2)

There was no real overall objective for the players in this scenario, I left it to them to sort that out for themselves. The two 'heroes' Scott and Mattias merely had to meet up and go to Scott's house (top left of the overhead photo below).

The ER (encounter rating) of the area is 3; Mattias Groschen has an Initiative and Leadership of (4) and all his other abilities (Shooting, Melee, Fitness and Driving) are 3's He has an attribute that gives him an increased Initiative of 1 when he is by himself.  Scott Briand has Initiative and leadership of 4, a melee ability of 3, but all his other abilities are 2, he has an attribute that allows him an extra initiative when interacting with people, but lessens his initiative for anything other than reaction. Mattias' companion in the vehicle was a jogger "Brendan Cram" that he was giving a lift to from their previous encounter.

The game started up with little general activity, Mattias' taxi entered the table and slowed down so that he could exit the vehicle and cross the road to meet up with Scott.


A lone zombie appeared at spawn point (1), the furthest from the  players, but strangely no others appeared even with the traffic noise whilst all the civilians (with all abilities of 3) just went about their pre-planned routes.


The first PEF to be revealed turned out to be two unarmed civilians whom we decided were fleeing from the recently spawned zombie.
Whilst the other two PEF's had each increased the ER of the area, it was now ER 5 ! - (Oh dear, in my games this has a direct influence on the chance of zombies appearing).


The mother and child got to their vehicle without incident whilst Scott and Mattias eventually met up, Mattias had to explain that his companion Brendan had decided that he would try and make it home on his own (a failed die roll). He also recounted the experience of his morning's outing to St. Mary's Heights.
Other civilians continued doing civilian type things (as they do) whilst the driver of the delivery truck shut the back doors of his truck. 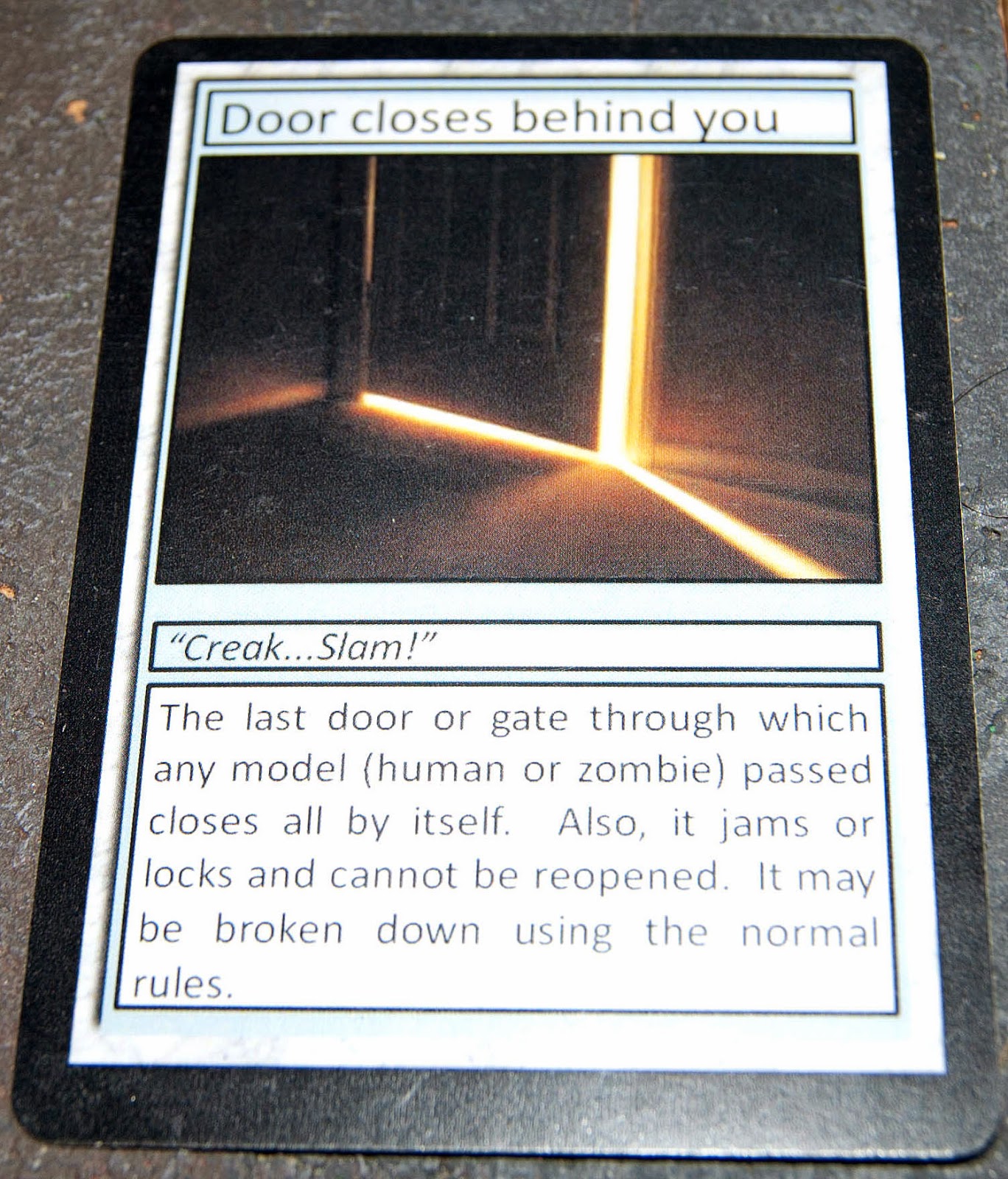 
The two pals started their leisurely walk down the street oblivious to the few zombies that were arriving, Mattias sharing his recent experiences.
The noise made by the various vehicles now started to take effect aslittle as it was.


The zombies by this stage numbered a mere two and we were about 4 turns into the game !


Over the next two turns the situation remained more or less the same, with the zombies being very hesitant to move or increase their numbers despite the increase in noise from various vehicles.

Inside the store the girl on the till was locking up, the manager was wondering what to do about his jammed shutter, whilst the other shop assistant was getting ready to go home.
The zombies still weren't in any great numbers, a single one did appear in the path of Sid, trying to get a free lunch, but was no match for Sid's van.
Other than the single zombie appearing the other two present seemed very indolent and happy enough to watch their lunches disappear into the sunset.
The noise from vehicles inevitably attracted a few more zombies to the area but only the two were directly in the path of our heroes and their home.
Another event (I've returned to having events appear on a '6' each turn - the same chance as it used to be.)
Almost overlooked by the players. a steady flow of zombies had appeared in the alley behind the bank, behind our heroes but they seemed more content on chasing cars.

Oblivious to most everything that was happening around them chatting about how much his camera and snazzy new flash unit was worth, the two looked on in horror as the staggering forms in their path proceeded to attack the slow car in front of them and all hell seemed to break around them. 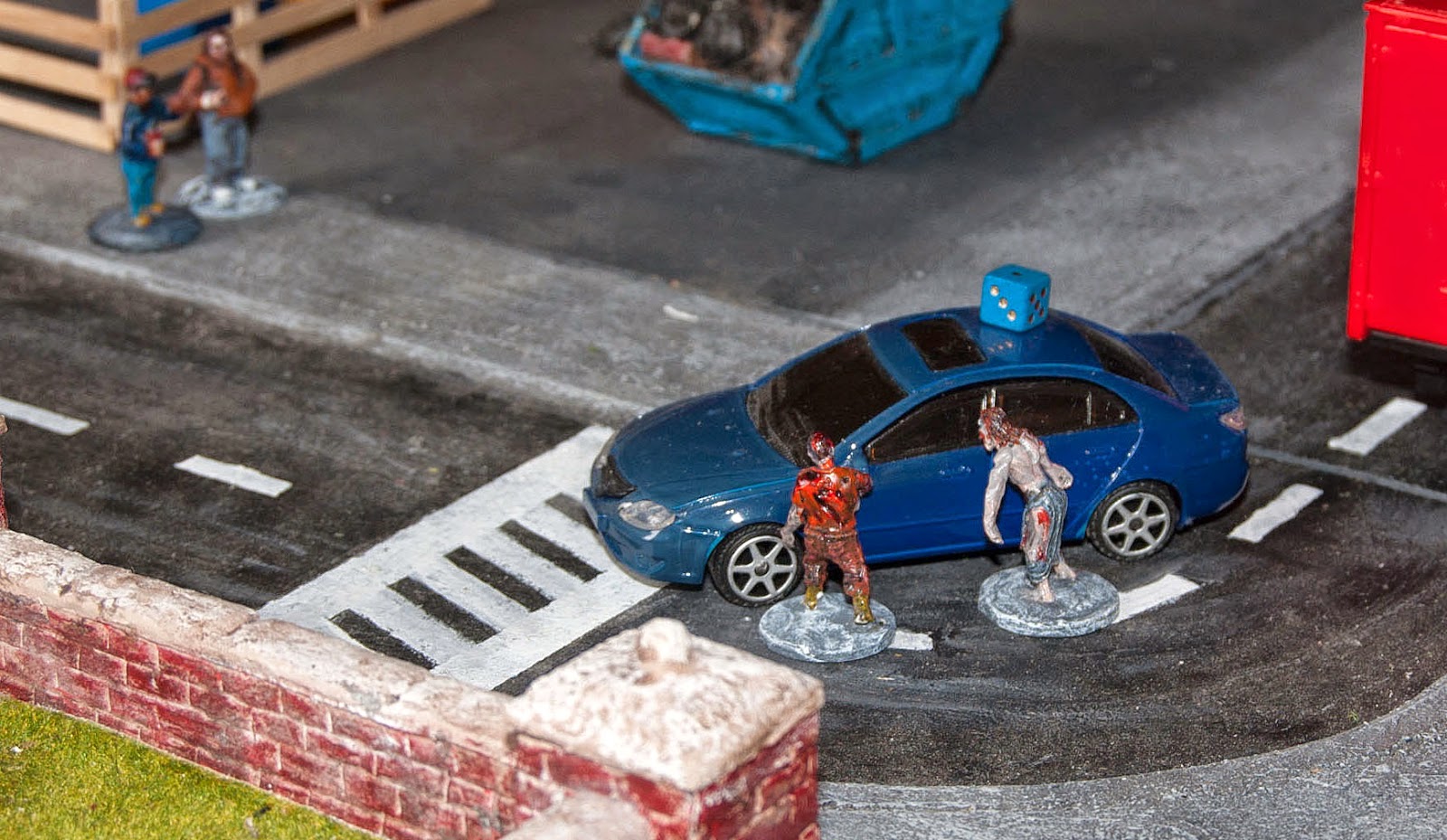 The blue car was suddenly attacked by the two closest zombies 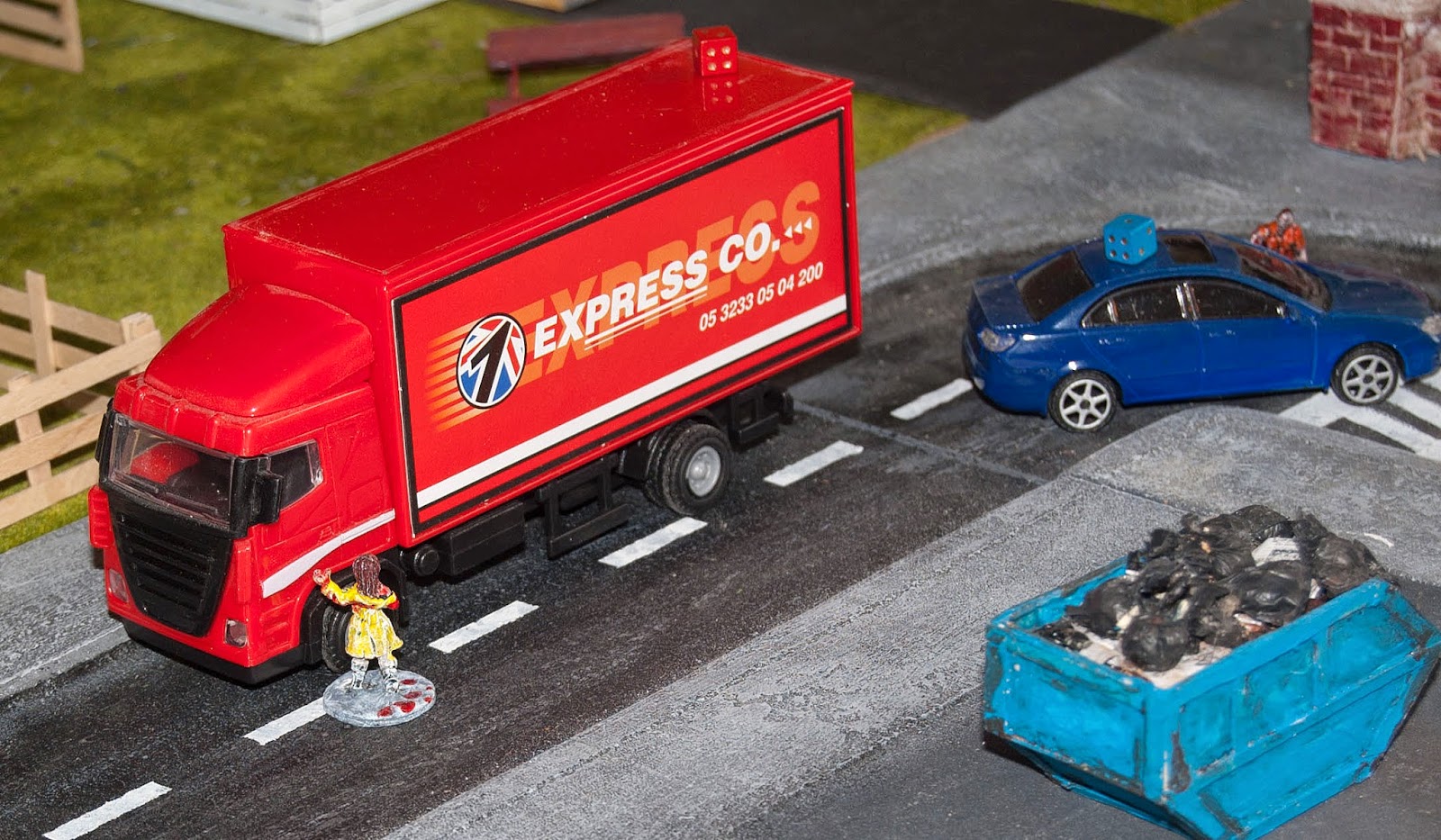 Whilst another zombie attempted to attract the attention of the accelerating truck by throwing itself under its wheels. (the driver wasn't even aware of it and carried on his merry way, wondering what that thump was)

The shop assistant, having now attracted the attention of the three nearby zombies was caught completely unaware and went down under a hail of flailing arms and teeth.
The blue car fared a little better,the driver didn't quite fight off the two zombies but did manage to knock one of the two zombie attackers down  - she also lost control of the vehicle as she ducked down, luckily though the car swerved to the right away from the park wall.
The truck accelerated straight ahead and clipped yet another zombie that was foolish enough to try and hitch a lift. 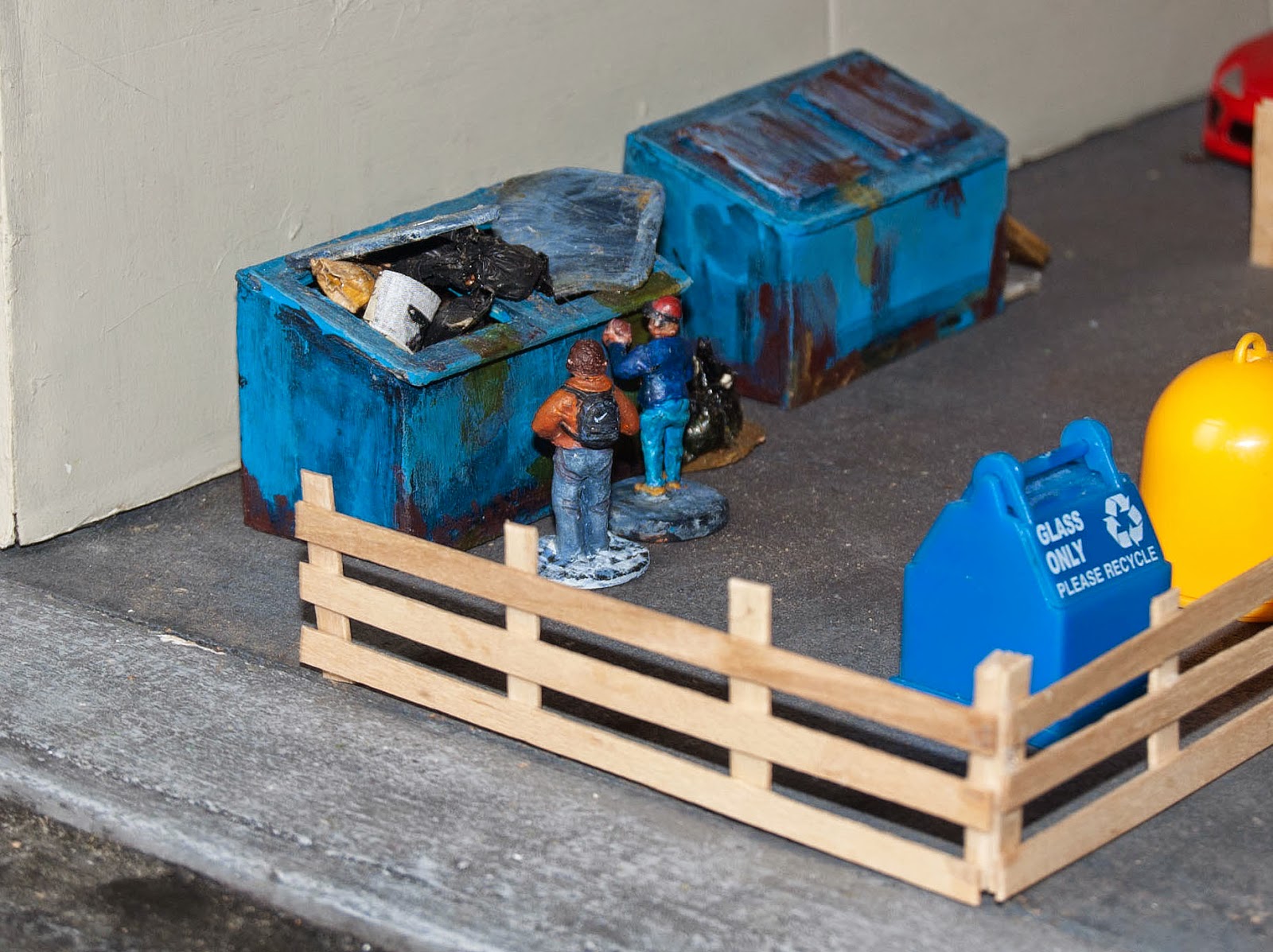 It was at about this stage that Scott and Mattias decided that it would be a good idea to head back to the bins they had just passed and have a quick look for some form of weapon.
They also had a plan...
Spawn point 2, had been depleted, if they could make their way there, then they'd be home and dry so to speak. 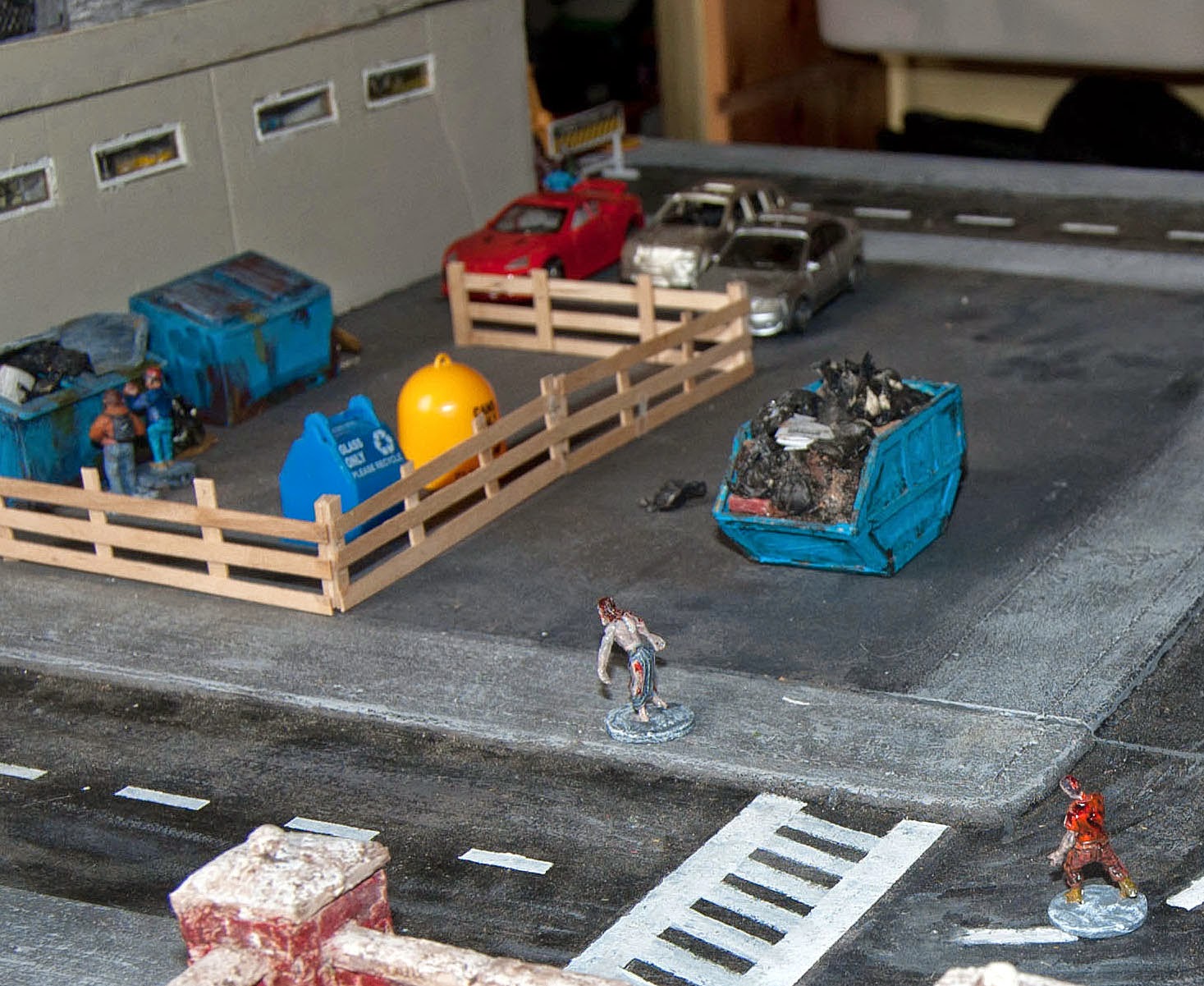 Apparently they were both reticent about putting their hands into the garbage and stood saying things like "You, go first", "no after you" and so on. even though they were in imminent danger.
The two zombies that had attacked the blue car were now attracted to what appeared to be slightly easier picking - the two arguing chums by the bins; one zombie stood up whilst the other staggered onwards.
The blue car was making its way out of the area, but more traffic was steadily attracting more zombies (mostly into the alley behind the bank).

And that's where I'm leaving it this week, about half-way through the game. It's actually taken about as long to write up this portion as it took to play the entire scenario and next week I'll finish off.
As my camera is consistently on the blink at the moment I'd like to thank the two players that joined me in this, Mattyoo playing the part of Mattias and Bryan/Vampifan, playing as Scott, both of whom were kind enough to take most of the photographs you see here.


I'd also like to welcome my latest follower "Stephen" who apparently doesn't have a blog and of course, as always your comments are both welcomed and appreciated.