We left our two heroes Scott and Mattias, reaching safety at the edge of the table and decided that under the cover of darkness they could easily make their way to Scott's house, so they could find themselves some weapons and get out of the area.


The photograph on the left shows their start position in yellow, zombies in red and their immediate objective, the supermarket employees entrance in blue.
Unfortunately it doesn't show the Potential enemies forces (PEF's), but it does show the myriad of dice still left on the table from the previous game.
They would start the game at the front of Scott's house. a a

There were about a dozen or so zombies on the table at the start and all the spawn points were back functioning and there was less chance of traffic.
Scott was armed with his "trusty" reproduction Katana whilst Mattias had the complimentary Wakazashi that came with it, they also both had a secondary one-handed improvised weapon.
There plan was to see if there was anyone in the supermarket, as the employees cars were still there from the previous day. With their plan all set they took off (at a run of course).
Luckily for the two of them, the zombies were seemingly distracted and took little notice of them and the three PEFs (ahead and to the left of them) were similarly idle.

As they made their way across the road the zombies did start to take an interest in their apparent breakfast and another was attracted by the movement.
The PEF's however continued to be disinterested in the whole proceedings.

Stopping in the middle of the road probably wasn't a good idea, something to do with a heated discussion on the merits of searching the bins I'm guessing, but it did allow the zombies a sporting chance of catching up.
Even as the intrepid duo were once more about to get underway a family of three appeared, fully armed,  in Laslo park behind them. Father (BA pistol), a mother (frying pan), and a child (football helmet), being my typical civilians they all had abilities of '3' except the child who had melee, shooting and driving skills of '2'.

This was an excellent opportunity to try out their newly acquired weapons to help a family that was going to be in trouble very soon. So our heroes picked up their pace and headed for the back of the supermarket, hoping that the family they left in their wake would be a suitable distraction to their course of action.
(Late news just in: "Officials report chivalry is officially dead in Springwater Hill")
It was on the cards that this wasn't going to end well for the forsaken family in Laslo park, the child followed Scott and Mattias' example and did a runner, whilst the father bravely fought of a zombie as his wife fell by his side.

Ahead of our duo another familiar face emerged running - Brendan Cram, having the added effect of bringing more zombies toward our heroes.
Having got the hang of this hunting down food thing, the zombies once more attacked the chap in the park; he managed to fend the first off, knocking it down, but died horribly at the hands (and teeth) of the second one.

Brendan did a runner, back from whence he had come whilst the kid from the park ran ahead of the pair of heroes, now sauntering toward their goal, allowing the child to be some sort of "scout", all of this commotion of course attracted more zombies to their area.

Ignoring the child's plea for help (allegedly) Mattias took off  like the wind, whilst  Scott was right behind him.


The kid, having stopped to catch his breath, as can be imagined, didn't fare too well being assaulted by the two nearby zombies. His helmet, used as a makeshift weapon broke in his first swing which left him on the ground from the first zombie attack and eviscerated mess by the second. The remainder of his family in the park were also now doing their bit for Zombie Aid and feeding the masses whilst the Zeds were growing in numbers.
The  two remaining PEFs moved up to the corner of the Supermarket and behind it.
Almost as soon as it had started the feast in the park stopped and the two zed's there started to wonder where their next meal was coming form. 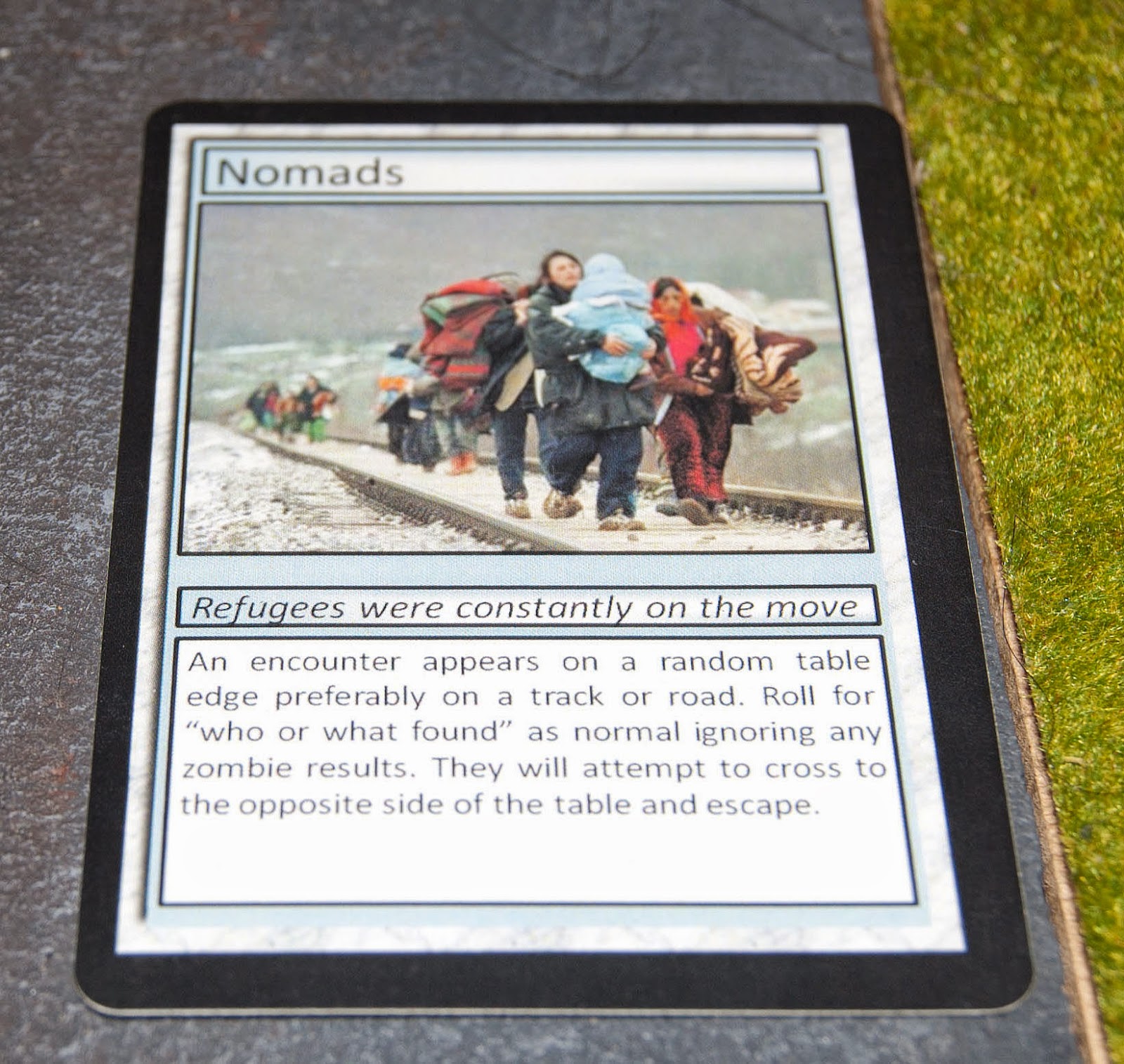 An event cropped up in the form of yet another runner, making her way across the table. (from spawn point 6 to spawn point 2, not particularity interesting really - it having no effect in game)

Scott and Mattias were joined at the door to the supermarket, by Brendan called over by Scott.
Mattias, tried to open the door, but found it to be locked !

Behind the supermarket the 'boy' was attracting zombies like flies to shit and the rare car appearing on the roads made mincemeat out of the zombie attracted by the noise it made speeding along the main road.

Having found the door locked, Mattias decided to try the exit, whilst Scott and Brendan banged on the door.


The employees door to the supermarket was unlocked by the till girl Dawn Brakes, (much to Scott's and Brendans' relief) as they rushed inside. Mattias meantime stood alone wondering what to do next at his locked  door.


The zombies out the back were luckily still sidetracked by what remained of the child, whilst the female runner made her way to safety table , distracting the two zombies still in Laslo Park.


Bryan and Brendan made their way to the rear of the store where a single zombie had appeared amongst the shelves (one of the PEFs, the other having raised the encounter rating of the area); there they met the manager Jack Spraggon.
Mattias took his chance and ran for the door to be greeted by Dawn.
The girl runner made it off the table to safety without incident as the two zombies in the park looked on despondently.


Scott took this opportunity to burble incoherently and achieved nothing whilst Mattias was still stood  making himself understood to the flustered Dawn. The zombies meantime made their way toward all the chatter going on at the door , having eventually finished picking clean every bone on the boy's body.

Outside the supermarket, the zombies make a bee-line for Mattias, who, in an even fight managed to knock  the lead zombie to the ground and then rushed inside the store whilst dawn locked the door behind him as quickly as possible.


Inside the supermarket, the lone zombie attacked the manager Jake, effectively putting him out of the fight (now the floor manager ?).
Scott decided to finally put his Katana to use and attacked the zombie, obviously not going for the head as the zombie merely joined the manager on the concrete, but even as he did so Mattias rushed into the storeroom and under Scott's instruction stabbed the zombie through the eye, returning him to a more permanent state of death.


At this stage, we called the game.
The two "heroes" had effectively achieved their  their objective, had the makings of a party of four (or five if Jake the manager survives) and the game was effectively spent as were we.
I too realise the frustration of a split aar and decided to relate this in full, despite its length and
there will be another instalment in this continuing saga soon (when real-life allows it to eventually gets played).
Thanks oonce more to Bryan/Vampifan for taking the phots and for noth himself and Mattyoo for taking the parts of the main characters.
Any resemblance to any person living dead, or undead was of course entirely intentional.

Thanks for taking the time to read through, or to at least look at the piccies and as always your comments are both welcomed and appreciated.