Last week we left our two 'heroes' standing arguing at the garbage bins  (they'd actually failed to activate) and most of the zombies that were generated seemed to be heading in their direction.
Deciding that discretion was the better part of valour they legged it in the hope of getting to a vehicle, breaking into it, finding the car keys inside (or hot wiring it), starting it up, driving off  and all before the zombies made meals out of the two of them -what could possibly go wrong ?


As both of them were without weapons, they would only have a 50-50 chance against a zombie, not good odds  and they attempted a fast move over the fence, Mattias made it over and didn't wait for Scott (after all you don't have to run faster than a zombie in the apocalypse just faster than your mate!).

Not far away,  more zombies had spawned close to their position, but were luckily more interested in the newly opened deli pavement, just outside the supermarket. 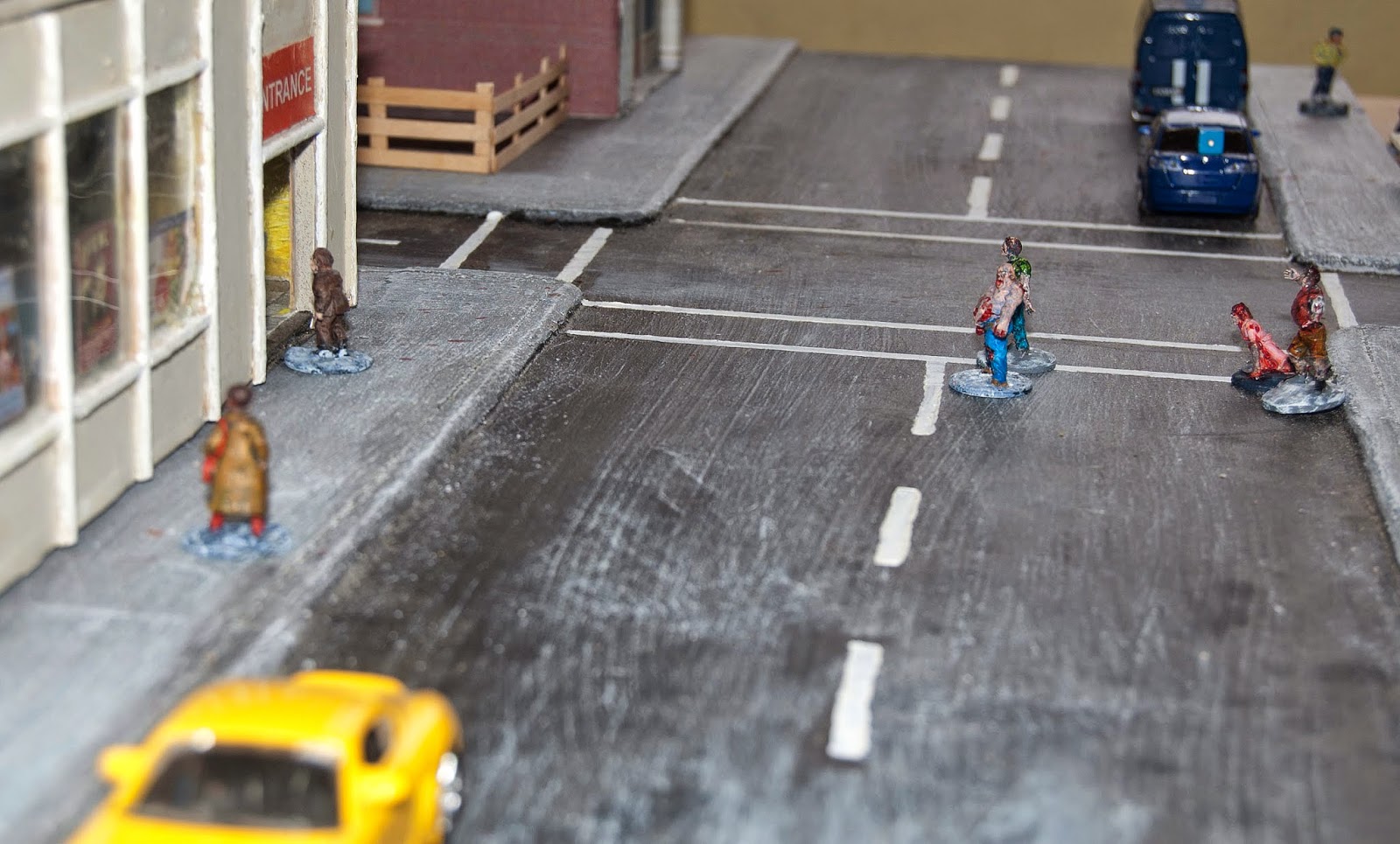 At the front of the Supermarket, traffic was still attracting more zombies, headed towards the chap in the brown suit (later to be called superman) 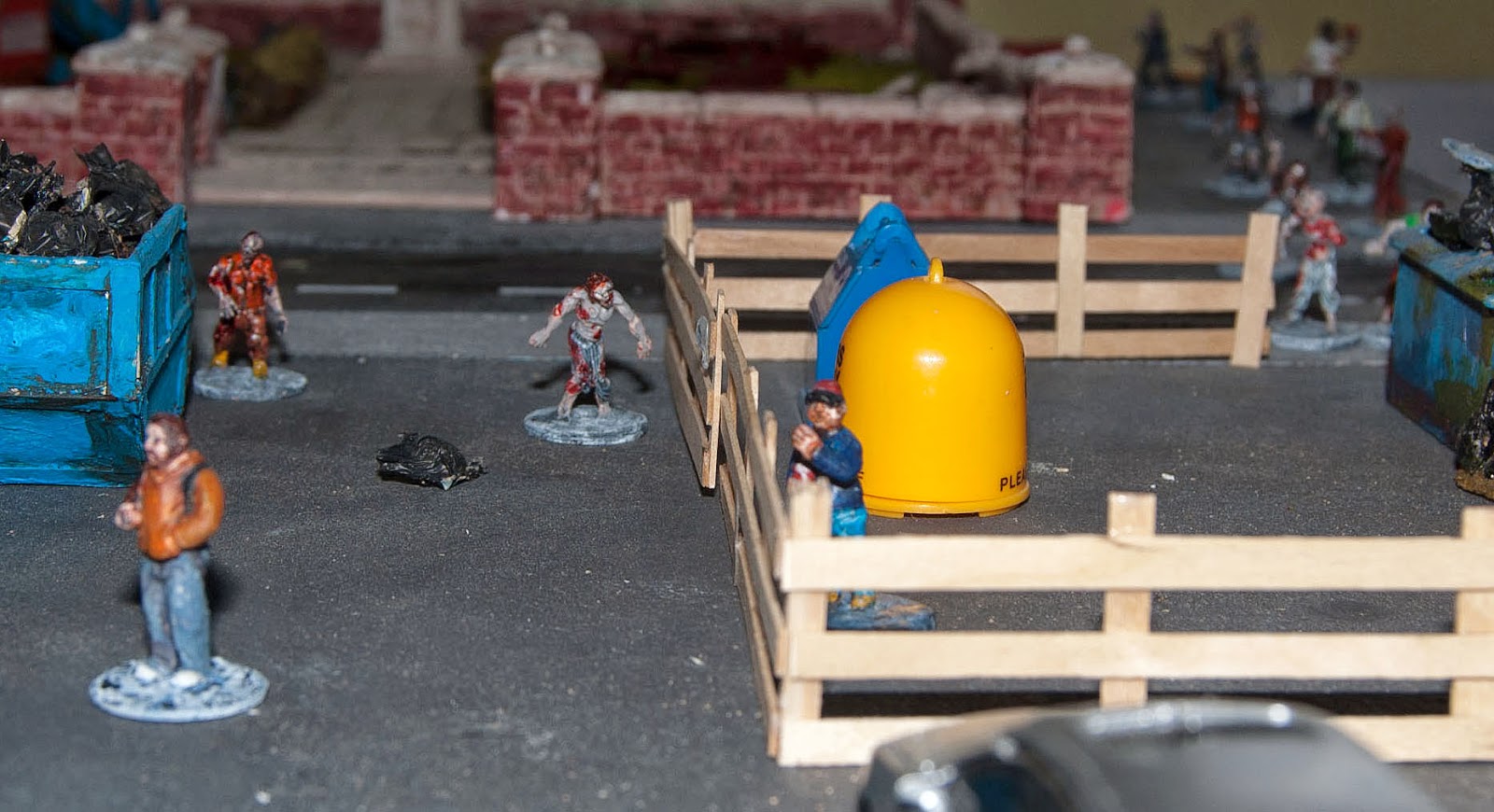 Whilst Scott still had some sway (little though it was) over Mattias they agreed to make for the closest vehicle betting on the closest zombies in front of them being more interested in their meal.


Whilst Mattias peered through the window of the vehicle to spot keys Scott managed to haul ass over the fence and catch up. As luck would have it, the keys weren't in sight (OK, so it was bad luck and the door was locked too for good measure). 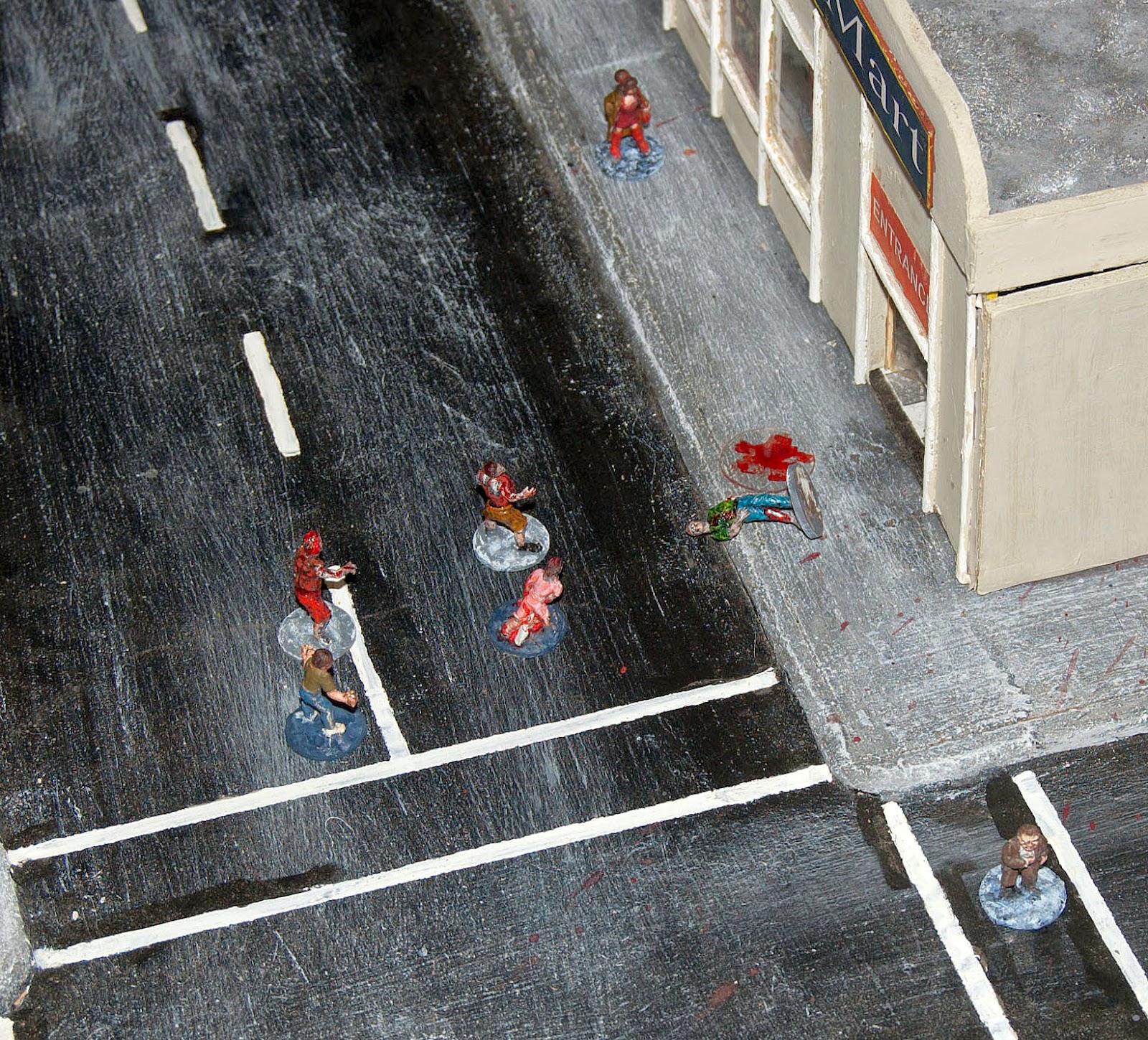 One bit of luck that our dynamic duo did have however is that the zombies feast was just around the corner out of their line of sight.
Lucky because if either of them witnessed it, it would have been their first time) and they would undoubtedly have been stunned !
"Super(market) man" defeats two zombies in quick succession and then ran for safety whilst a local stood watching "not bovvered" and  chewing gum presumably.


With the recent turn of events at the last vehicle, they decided to head for Scott's neighbour's jeep, at least they wouldn't have to break into that.
However, nothing is ever simple with these two. As they neared the jeep they realised that the newly poured concrete and approaching zombie was probably going to be a bit too much for the two of them to tackle.

Once more the two took to their heels and jumped the fence whilst more zombies closed with them to their front and rear.


Elsewhere the traffic had stopped flowing (it wasn't going to have any further effect on this scenario so I called a halt to the chance of any more arrivals of vehicles or people), but the flow of zombies hadn't.
"Superman" decided he was out of breath and stopped running and went down to gloriously rolled treble ones by the zombie (low is good btw) giving the zombies three successes against his single one. This would have the effect of drawing every nearby zombie to the subsequent feast.

And there were quite a few of them by now !

The remainder of the scenario was a bit of an anti-climax and turned into a something of a Benny Hill sketch as the heroes tried to escape around the back of Scott's house avoiding the zombies and heading for the safety of spawn point 2 and hidden from view. 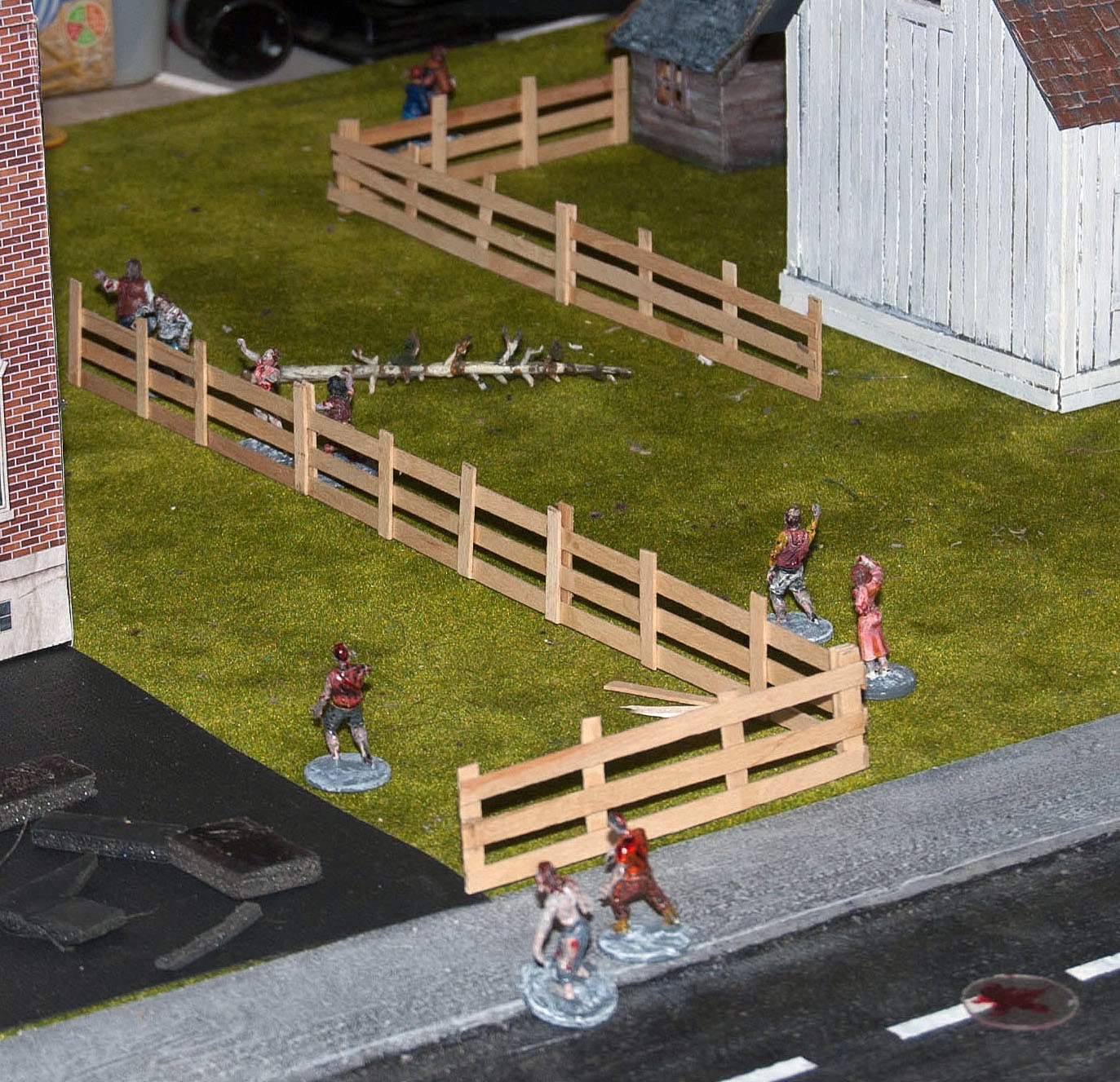 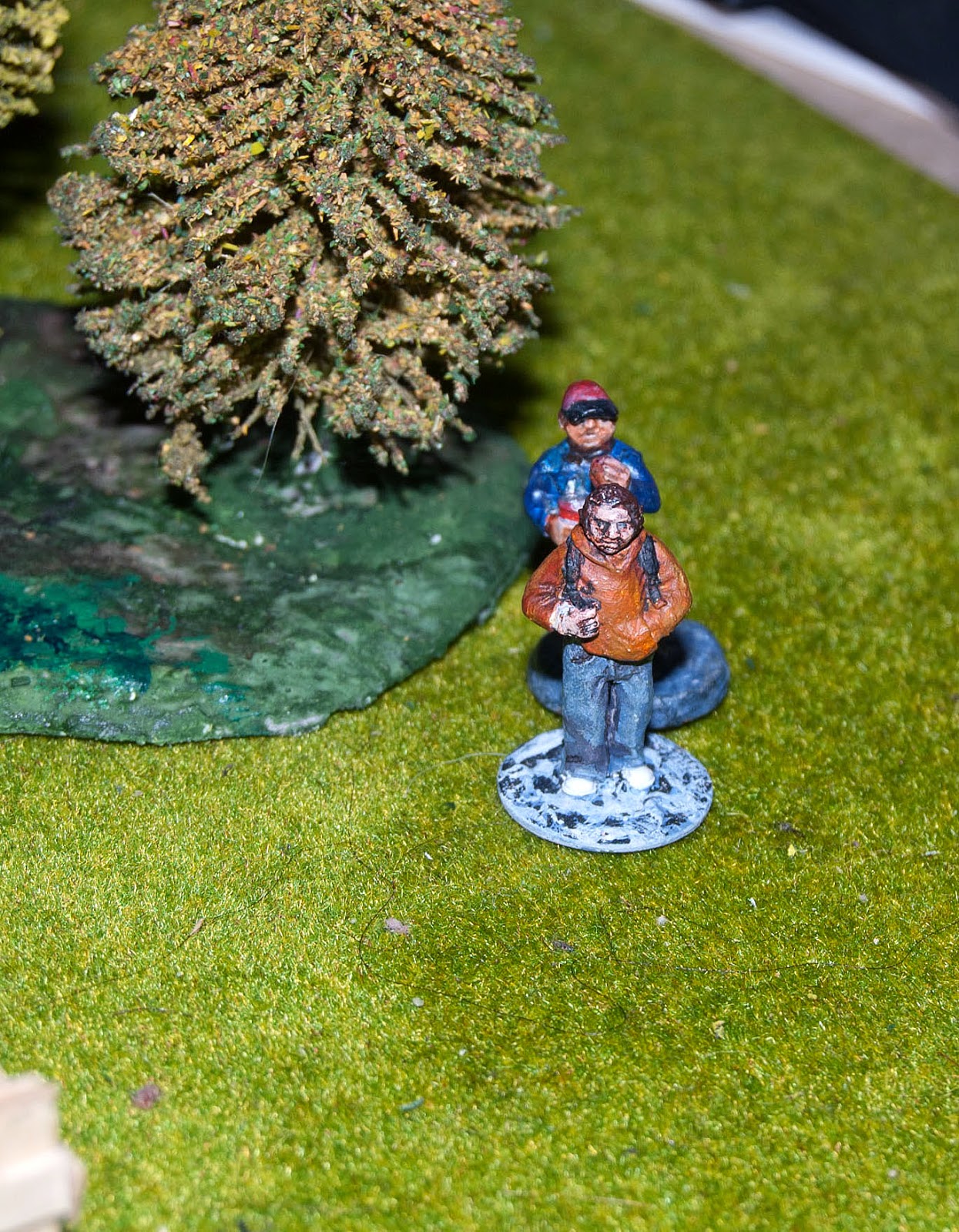 The  zombies gave up looking for them as they luckily went out of view. (The zombies failing to activate may have helped too.)

At this stage I called the game, the 'heroes'  had somehow blundered their was through and reached safety.

So it wasn't a very exciting game full of action, but it had all the elements I was looking for to test my own version of ATZ (and its derivatives). For our next scenario I streamlined some of my ideas that had worked but were clumsy in execution. It was interesting to note though how reluctant the two players were to enter into any form of combat with the zombies, yet "Final Fadeout" almost forces civilians to enter into combat, wrongly imo.

That's it then for this week, our two "heroes" will return with an equally gripping tale next week as I once more "Return to the Burbs" - you have been warned.

In the making of this scenario any similarity of fictional characters with persons living, dead or undead is entirely intentional .