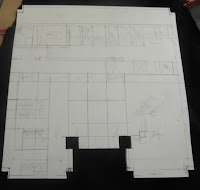 The walls that I featured in last week's blog were the start of my next large project, namely a park.
For the base for the model I used a sheet of 5mm plastic, as it would give some rigidity to what I think will be a fairly fragile piece when it's finished.
On the first two photos you can see lots of lines and writing on the base, these are in fact a 1:1 scale plan of my Superdupermart that I built a while back !
The second photograph shows best what the strange fort-like cut-out is intended for - the entrance. 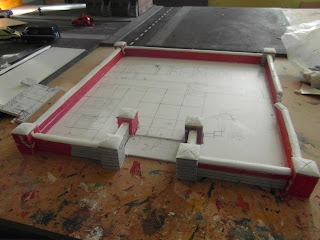 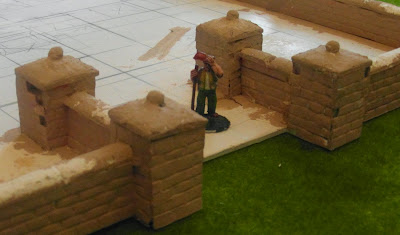 The tops of the corner columns also had another piece of card glued in place on the tops and then the foamcard squares that I showed last week were fixed on top of those. These squares I found were 5mm too large and were cut to size, once in place.
The column tops and walls were filed down to give a curved appearance and the final touch was a small plastic 'BB' ball glued to the centre of each column. A thin coating of filler was applied to all of the of the columns and the tops of the walls.
The next stage was an undercoat of tester paint from the DIY store (Wholemeal !) applied to all the brickwork. I also glued a thin piece of plastic as an additional step into the park (Sid is standing on it in the photo above). 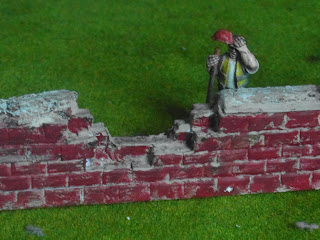 The brickwork was painted next, staring with a very dark brown stippled randomly, followed by a slightly lighter brown, Although this doesn't really show in the end product it does give a better look to the brickwork imo and is worth the effort.
Next I dry-brushed a very deep red across all of the brickwork  followed by another dry-brushing of a more 'brick-like' red.
To finish off the effect, once thoroughly dried I applied a dusting of white filler across brushed the whole of the brickwork using my finger.
This appears on the photograph much harsher than it actually is.
The tops of the walls and pillars had a wash of dark brown applied and then success layers lighter brown highlighting applied.
The two photographs show the grass effect applied inside the model and a green terrain board the model  is sitting on - note the variation in greens even though its the same model in both pictures! 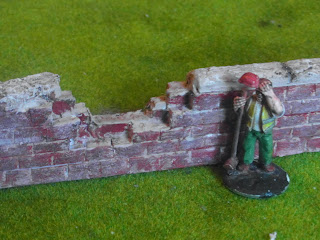 I've showed the only detailed feature of what would have been a very bland looking perimeter, a broken section of wall. This was not a mistake that I incorporated, but just something I dreamed up whilst making the model!

This venture has now been a month in the making and is nearing completion, but has a little more still to do on it. I have started on some of the internal features too, but I have been greatly distracted by trying to make other things for my next scenario, all of which will feature sometime soon.

That's it for another week, as ever, your comments are both welcomed and appreciated.