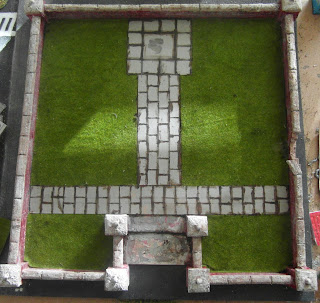 The work on my park has been carrying on apace even though I went through my usual lethargy half-way through this project.
As can be seen from the photograph I added some greenery in the form of two strips of grass-mat (courtesy of my son) on  top of which I put two pieces of very thin soft card as templates and cut out the bits of "grass" that were beneath, the card was then glued in place.
The sections of paving on the card were inscribed using a very sharp pencil, rather than a craft knife and were then very roughly painted-in using a dark brown. You can see my usual practice of using a part of the model as a palette (in this case the front step !). 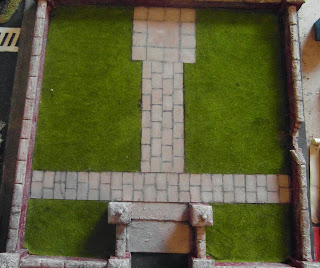 The paving area was decided upon after a great amount of thought after many other configurations.
The next picture is to show the pathways after two coats of dry-brushing.
The first was the darker of the two ("Wholemeal"), whilst the second was a highlight of "Sandstone", note the step has now ceased being used as a palette, that honour being taken up by the centre of the square in the top of the model. 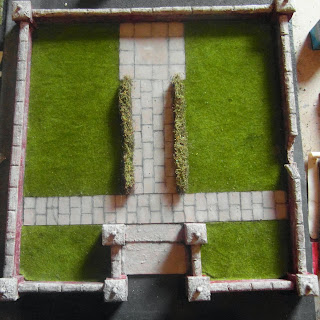 The photograph on the right shows two hedgerows I added as a small bit of detailing (also giving some cover for figures, be it slight).

The hedgerows are made from rubberised horsehair, beloved of many wargamers, back in the day, when "Snickers" were called "Marathons" (bit like this project - a marathon)
I ripped them from their card bases and gave them some added life with some pva glue and flock on just their upper 'surface. 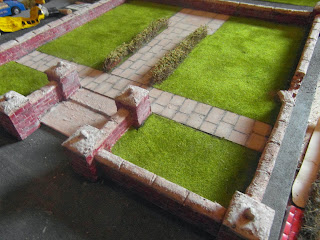 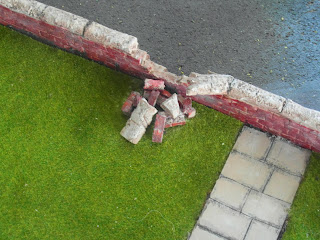 To complete the 'terrain' part of this model I added the fallen masonry inside the park walls.
The bricks came from my pot of cork bricks, suitably coloured to match the foamcard walls of the park. The broken top pieces of the wall were the actual bits cut from wall.
There still needs a bit of mud and dust added to complete the effect of course and this will be added when the completed model is "weathered", which in my view s a necessity as I really don't like pristine looking scenery.

Next week I'll be showing some of the internal bits I've made for this model and I'm currently trying to finish the final pieces before the final assemblage comes together, but I still keep coming up with bits I'd like to add !

And that's it once more, as always your comments are both welcomed and appreciated.