Some Final Bits (The Park part 4) 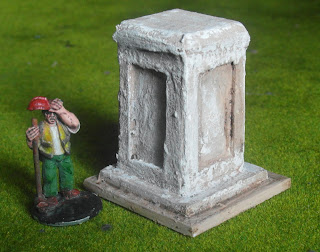 Here's the final bits for my park starting with the centrepiece for the central path - a monument.
It doesn't really represent anything other than a generic monument and I could have attempted some engraving on it, but the effort involved I thought wasn't worth the return.
I'd also thought of putting a statue on the top of the plinth but this would have added greatly to the overall height of the model and would have been just another bit that could be broken off. 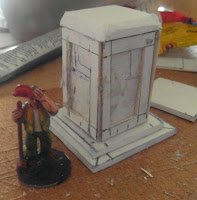 The left hand photo shows the structure of the pieces, two layers of  cardboard sides with the base and steps of plastic. I wish I'd thought to use a slotta-style base for the top of the model.
It's a very rough and ready model made in about an hour on a whim, (I had originally planned a small fountain or flowerbed) and with a quick thin wash of filler and some hurried painting I decided that it had had sufficient time spent on it for what it  was. 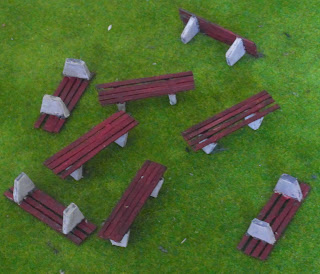 Next up were some benches for the park, which again were fairly quickly made (I was getting quite bored with this model by now).
The benches are quite simple affairs, just slatted seats and a pair of supports. The slats are of course coffee stirrers, cut in half lengthways and then cut in half widthways too. The overall length of the seats is about 50-55mm.
The supports are scraps of plastic cut to a rough trapezium shape. The base of the support is 1cm, the top (supporting the slats) is 15mm and the height is a mere 1cm.
I thought I'd need at least four, but made the "extras", knowing that some would turn out better than others. 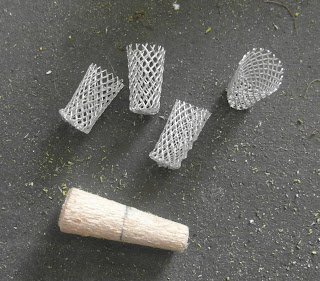 Next up was another one of those "I wonder if I could make" moments when I thought about waste bins as an added detailing feature.
I cut a strip of mesh (the car repair stuff) and wrapped it around a spile marked at 20mm to make a cylinder. The mesh was then pressed into place to make a cone and finally the bottom pieces were were pressed flat too.
(The spile is the cork like looking thing in the picture, used on the top of beer barrels to let air in).
The rubbish bins were painted black and had various small bits of paper and plastic glued into them. The base was also filed flat to sit better on the model. 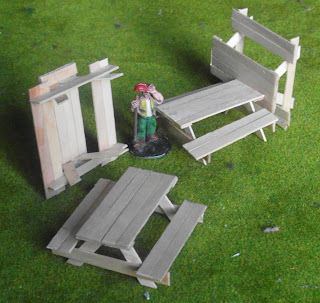 The final bits I made were as shown, four picnic tables, made entirely from coffee stirrers.
The tops are half the length of a coffee stirrer (about 60mm), as are the seats. The table top is about 20mm high, the seat being about 1cm.
Construction was fairly easy and quick, most of the time spent to finish these was waiting for glue to dry.
They were painted in a similar colour to the benches above, but were given an additional highlight for contrast.
Some minor detail would be later added when they were in situ.
I did think that I'd be using all four in the park, but as things turned out I ended up only needing two for the park.

With the final few features, made and painted up, putting it all together was the next step and that will be subject of next week's blog.

That's it then for another week; I have "Dannoc", a new follower to welcome and as always your comments are both welcomed and appreciated.
Posted by Zabadak at 06:08