The more observant amongst you will have noted that I've actually dropped the wip part in the title, this of course is for a very good reason in so much as I've finally finished the Park !
I do however wish to show the separate bits I've made to bulking the inside of the park.
It was difficult deciding what to include (flower beds, fountains, general greenery all came to mind, but my initial thoughts were for a children's play area. I opted for just three items to be included, a swing-set, a slide and a see-saw. I thought these would be fairly easy to make out of scrap and were typical of a play area. 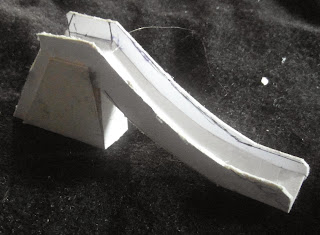 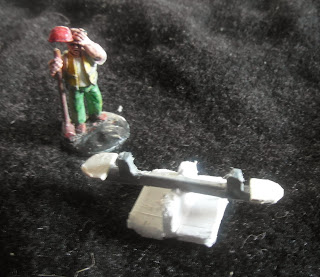 The slide is entirely made from thin card but has a core of polystyrene in the solid support.
I went for a solid stairs end mainly for ease, similarly with the support rails for what really should have been typically been iron stairs (or similar).
I did miss out on a trick that I only thought about afterwards in that at the top of the slide I should have built some form of platform, this would have enabled me to have placed a figure at the top. The slide's current width of  about 20mm really prevents this.

The second piece of equipment is a see-saw, made from various bits of scrap plastic; the central cross-beam is a bit of sprue, suitably filed down.

This was another one of those models that I'd started and wished I really hadn't. It's so small and fiddly to make it look right.
The base itself is not a single piece of scrap, but two pieces glued to the central upright for added strength. 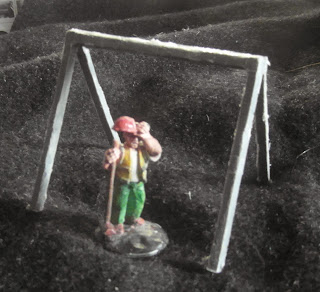 The final bit of equipment is the swings set.
The frame of this is again two bits of identical right-angled sprue glued at what looked by eye to be an appropriate angle.
I had enough space between the angles to get two actual swings in the gap without it looking complete pants. 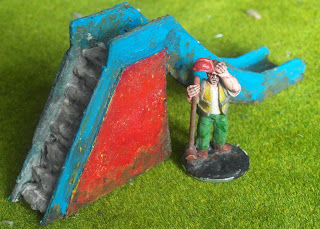 The slide was given a wash of filler over the rear steps before painting started.
The pale green slide, turned into the garish yellow and green slide before I opted for the red and blue slide you seen here.
As in all my models the bright cheerful colours I had settled on were then abused with washes and splashes of various browns to represent the wear and tear of neglect on a rusting playground. 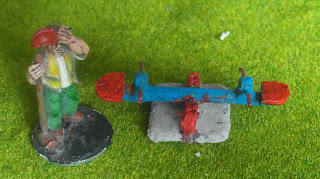 The see-saw had two holes drilled into the upright pieces and paper clip handles, cut to size, glued into them.
Again the yellow and red turned to blue and red and was suitably "weathered".
I'd decided that the base would be painted to represent a dull concrete for contrast, rather than a rusting metal plate. 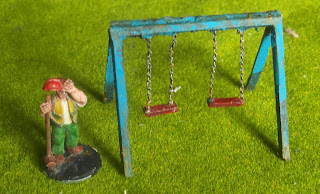 Little did I know that when starting the swings, what a veritable pain in the posterior attaching the actual chains to the uprights and the seats to the chains, would be.
The chain is from a cheap bit of jewellery, kindly donated by SWMBO (knowingly, if you were wondering) and the seats are more sprue.
I think I probably spent more time putting the chains and seats on this than I did making all of the above. The chains were eventually superglued into stiff lengths (thus it's not a working model).
Once more weathering was applied to the blue uprights (its original intended colour).

Once more that's all for this week. Next week's blog will show the elements that finish off  the Park's internal bits, featuring, once more, the use of coffee stirrers (just for Clint ).