My second session of this game saw the arrival of a friend to help me with decisions about the game, move pieces around and look up rules whilst I continued to bimble about taking notes and photos. This speeded the whole process up and we got through four turns in the time it had taken me to play two.

Zombie Jimmy is currently feasting and a throw of the die indicates that he’ll continue to do so (he needed a 5 or a 6 to stop).

The driver in the red car is stunned at seeing the feast (passed 2d6) and drives straight on, despite what he may have wanted to do or where he may have wanted to drive.
Skater girl ducks back behind the shop on the corner whilst the Old woman heads for the hills abandoning her ward, the footballer wannabe; the woman who was with the skater ran down the alley.
TV guy and the football child are no longer stunned and are joined by "Mac", the man in the tan raincoat.
None of the three are in any particular danger, nor are they aware of the zombie, though Mac is currently out of range of seeing the feast.
As no player was actually in charge of the civilians, it was at this point that I decided I needed an extra test to see what those involved may do and this test came about:
Pass 2d6 – Have a go (get involved)
Pass 1d6 – Stand and Watch (rubberneck)
Pass 0d6 – Walk away from the incident.
(This test subsequently became known as the Have-a-go or Hero test – even passing this would not counter the Zed or no Zed test or the Brown pants rule, it’s just a mechanism to decide what NPCs may do)
Turn 4:
Initiative results: Civilians 5, Zombies 9
Old Jimmy is certainly enjoying a good meal, (probably the best he's had in a long time) and continues to do so (Zombie continues feasting).
Ivor Adams joins the fray, driving to the scene in his black "boy racer" car, jumps out and “sees the feast”, then immediately ducks back in to hide.
Civilians outside of the action area mill around as usual, but tests are made for the TV guy, the wannabe footballer boy and Mac.
Both the footballer boy and TV guy have both had enough and decide to head off (Hero test)
Mac passes 1d6 on the Hero test and it’s decided that he’ll call the cops and continues to watch events unfold as he does so. The cops will be here in 1 to 3 turns.
Skater girl decides to have another look and reappears from behind the shop having finished ducking back (using the hero test)
Turn 5:
Initiative results: Civilians 5, Zombies 10
Perhaps not surprisingly the Zombie, Old Jimmy, continues “feasting”: 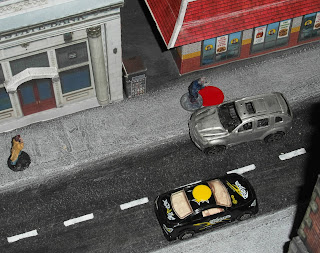 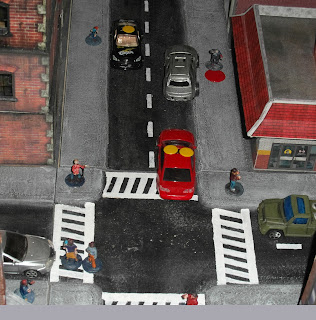 A red car pulls up and has two people in it both of whom see the zombie and the feast with the result that they both duck down in their vehicle. (They turn out later to be an old woman and a young girl)

Another vehicle (a red pickup with a crate) drives onto the street with a single driver in it as the various other civilians go about their business as do other vehicles.
Sirens can be heard approaching fast as both Emergency Responders enter the table at speed. Turn 6:

Initiative results: Civilians 5, Emergency Responders 10, Zombie 10
After a re-roll the zombies have initiative ahead of the responders.
With nothing better to do Old Jimmy the Zombie continues feasting
The Cop vehicle hadn’t slowed and had come to rest about 1½” behind the red pickup with the crate in it.
The police car is in a precarious position and must slow down, it is currently doing a speed of 3  (18") and has less than 2” to spare before hitting the red car in front.
It slows by 2 “speeds” as normally allowed in my rules but must dice against the driver’s skill for an emergency 3rd reduction in speed.
The emergency braking table results (throwing two dice against driving skill):
Pass 2d6: may decelerate an extra speed
Pass 1d6 may not decelerate an extra speed this turn (may try again)
Pass 0d6 may never decrease an extra speed again in this game (with the same vehicle).
With a driving skill of 4 the cops pass their test with 2d6 and screech to a halt taking another 1½” of movement from their extra d6”, to enable the following ambulance to get passed their rear. I imagine the driver in the red pickup, breathed a sigh of relief as the cops didn’t rear-end his vehicle.
The ambulance has a clear path now to make its way to the scene of the “accident” reducing its speed to 2 which with its d6 die roll of 4” places it adjacent to the feast..
Officers Carrie Hallihan and Abraham Talltrees make their way from the vehicle (losing a ¼ of their movement rate to exit the vehicle)
The ambulance crew have used all their movement driving and can’t exit, but they do see the feast from their cab and are both shocked at what they see and duck down beneath the dashboard (yellow counters not yet placed); the two police officers can’t see the feast, which concluded the Responders initiative.

Anne Nhon in the Silver car observes the scene, whilst Ivor Adams, the boy racer in the flashy black car decides to stay ducked down.
Mac still appears fascinated and continues to observe proceeding along with Skater girl on the opposite side of the road.
The red pickup with the crate travelling at speed 2 elects to come to a halt, whilst various other civilians and vehicles go about their business.
[Note: The small dice in front of the three vehicles involved represents their speed - each pip representing 6” of speed). Normally I’d place these dice at the rear of the vehicles, but I’ve shown them placed at the front for clarity. Both ER drivers were assumed to have a driving ability of 4 for this scenario]

The concluding part of this will be next the subject of next week's blog, let me just finally say "Welcome" to my latest followers "Mosan92" and "Mathew Raevis", hope you find something here that interests you.

As always your comments are both welcomed and appreciated
Posted by Zabadak at 05:27