I went to Durham Wargames show on the 8th June and picked up a few bits but the title "Loot" is rather grandiose for the meager "haul"  I managed to get. I ventured to the show for the first time in many years with my son and a mutual friend as company (and excellent company they both were). The most pleasing part of the whole visit was seeing and chatting to many old friends and meeting several fellow bloggers (all of whom I already knew but hadn't seen in a very long time). 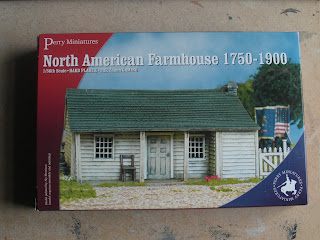 As for the actual 'Loot', I picked up two buildings, from the ever-friendly Dave Thomas. The first was the "North American Farmhouse" which I quite liked the look of, being very similar to the cottages I scratchbuilt a while ago.
It'll fit in with my own modern set-up as houses like these , I'm led to believe are still used all over America. Even if they're weren't it could still perhaps be a preserved historical building (birthplace of Jebediah Springfield perhaps?). 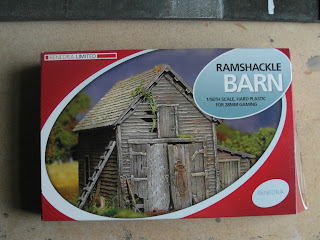 The second building was the Renedra "Ramshackle Barn". It's a very simple barn and can easily be used in a modern setting.
It's barns just like this one you can see used as garages, hideouts and so on in all sorts of eras. It obviously won't fit in with my modern city set-up, but for the rural areas (and maybe in the suburbs), it'll be usable.
Both models consist of very similar and basic components - four walls and a roof, with no measurable internal details. the farmhouse has the extra 'L' shape on the front, whilst the barn has a 'shed' type structure tacked on the side.


The farmhouse has three sprues, two for the main building and a 'Renedra" fences sprue which has three different fence types on it making it less than useful. It does encourage the buying of a box of these in future to have a fence of usable size at least.

The barn's three sprues have one sprue duplicated, containg a side wall and half of the roof. Although this means  the side walls are identical one of them is intended to have the 'shed on it' so it isn't really  that noticeable.The most annoying thing on this model is that the front doors are one piece and overlap, making it a nightmare for conversion. 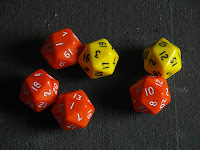 In addition to the two buildings I picked up some d20s that I could actually see (my current ones are mainly all very dark colours) and some animals, both from the very friendly Ian and Ron at the "Irregular Miniatures" stand. As long as I can remember I've always used whatever cash I have left buying things from them at this show.
I've slowly been writing up my zombie game rules (based heavily on ATZ - of course) and I'm using d20's for shooting and for some aspects of melee. 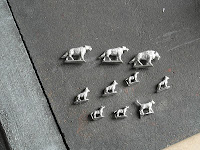 The animals I bought were mainly dogs (there is a cat there somewhere) which I intend to either use as feral domestic animals, as yet another hazard for survivors to face or as markers for PEFs (potential enemy forces). In my latest game I realised I hadn't anything to use as PEF markers and had to simply use dice, which wasn't a particularly elegant solution. I'll be adding to my dog pound in the future with the dogs from "Black Cat's" gangster ranges and I'll be adding a few from their other animal ranges too.
Other than buying yet more things to paint I've had a burst of energy and undercoated another batch of figures ready to paint (aarghhh)
I've also finally assembled my "EM4" plastic troopers I'd bought more than a year ago along with the metal heavy weapon conversion pack.
They were easy enough to assemble and do some minor conversions on.
I'll be using these as the Military in my games (if they ever get undercoated and painted) even though they're a bit Sci-Fi.
Other than the zombies (Blue Moon) all the figures bases are 20mm washers and gunked up with wall filler from Poundland.


That's it for another week, I'll be writing up the last game for my blog next week.