Part three of my game continued for another two fairly brief sessions, unfortunately without assistance.
Turn 7
Initiative results: Civilians   5; Emergency Responders 8; Zombie 7
With nightstick and pistol drawn Officer Talltrees moves bravely towards the suspect (Jimmy the zombie), recognises him for what he is, sees him feasting and then bravely skedaddles away into the sunset screaming like a big girl. Officer Hallihan makes her way to the rear of the ambulance takes one look at what was happening and ducked behind the ambulance for cover.
The ambulance crew stay ducked down but have the foresight to step on the brakes and the ambulance is halted [it was probably a bit of a fudge on my part but things were messy enough].
Old Jimmy the Zombie seems to be revelling in his new role and continued his feasting.
Ivor Adams in the boy racer car (the black one), looks up and decides he’s had enough [he passed 2d6 on my "hero table"], with a quick look around his car he finds nothing to use as a weapon and goes into the fray against Jimmy with his fists and boots.
The outcome isn’t pretty,  Jimmy gets 2 successes against Ivor’s single success and Ivor is quickly dispatched (dead), and Jimmy will immediately start to feast on him instead of his previous victim Millie.
Anne Nhon in the silver car is content enough to continue watching.
The driver of the red car is still ducked down whilst the passenger is taking photos on her phone and messaging her friends.
Mac has decided he's seen enough and having done his civic duty heads for home probably phoning his wife to say he'll be late for dinner.
The group of civilians opposite can't see what's was going on and continued walking up the street whilst even more civilians enter the area (even with multiple random chances of moving elsewhere this particular street seemed to be a magnet for the civilians).
Turn 8
Initiative results: Civilians 8; Emergency Responders 5; Zombies 10 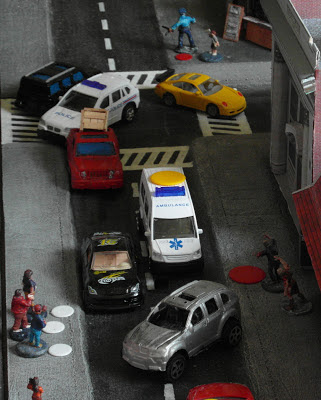 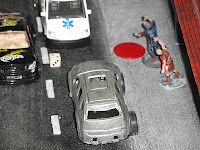 The initial casualty Millie was not being feasted upon this turn and had a chance to turn into a zombie.[i] Millie, right on cue, rolls a six, turns into a zombie and stands up.
Old Jimmy the zombie happily tucks into his dessert of the now deceased Ivor.
Anne Nhon in the silver car decides she’s had enough of this fiasco; a quick five point turn and she’s at least headed in the right direction.
Five civilians all come into view of the new feasting malarkey, all of whom see the two zombies and Jimmy tucking into his new victim. The results are that three are stunned by what they see and two flee from the abhorrent sight. 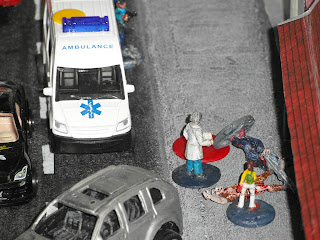 The driver of the red car finally looks up just to see her passenger decide to attempt to batter the nearest newly raise zombie with her phone and fingernails (she, like Ivor, couldn’t find anything handy in the car to use as a weapon) In the ensuing even melee, both sides having 3d6 she gets one more success than the zombie knocking it to the ground.
The driver of the red pickup was left sat wondering what all the fuss was about.
[As it could be important as to who acted first amongst the responders I diced for it and the Ambulance crew “won”]
The Ambulance passenger decided it’s time to act and emerges from the Ambulance with his trust metal clipboard and attacks Jimmy, in the melee, it’s 4 dice for the Doc against 3 dice for Jimmy with a result that neither get a single success, so they’re locked in combat.
Whilst Officer Talltrees continues to head for them thar hills; Officer Hallihan emerges from behind the ambulance shouts a quick warning and determined to get her man (Jimmy) she pops off two shots from her pistol, which  results, in a hit and a miss The impact of the shot blows Jimmy’s head off shooting him dead (dead again, but permanently this time).[ii]
Turn 9:
Initiative results: Civilians 5;    Emergency Responders 7;  Zombies 9
Millie the new Zombie can do nothing but stand up, so she does.
Officer Talltrees is no more to be seen, (having by now fled the table); Officer Hallihan shoots at Millie the Zombie and with the same chance as before, gets two hits, enough to put two rounds in her head.
The Ambulance driver finally looks up and realises there’s work to be done whilst Doc looks to see if anything can be done for poor Ivor, who after all, has only suffered a few bites here and there
The Citizens have little to do now (except perhaps applaud), Anne Nhon drives away and  more civilians arrive.Most everyone else tries to take in what they’ve just seen .
At this point I declared the game over after I had determined how long it would be before Ivor turned into a Zombie (needing a 6 on a d6),  as it turned out it was actually six turns, by which time I thought the ambulance crew would have loaded him in their ambulance and headed off, for him to revive en route back to the hospital.
More police and detectives would be called to the “crime scene”;  ambulances to remove the remains of the three deceased would also be needed etc.
I took the final photo illustrating a possible aftermath for my own amusement.
The "named" NPCs will be given a proper character card, with suitable stats and an attribute according to how I interpret their role, so they may well feature in future games.

Observations:
There were a few times that I had to back-track when I’d forgotten which side of the road the Americans drive on, but it was fairly amusing at the time and just something else to remember.

I spent a lot of time photographing and taking notes, (which didn’t get any quicker as the game went on) and was much more than I’d anticipated. Writing up this whole scenario, selecting and clipping photographs, took about the same length of time as playing it. I’m sure though that once I find a writing style that I’m comfortable with it’ll be easier – I won’t be explaining as many of my rules in the future either, which will help enormously
I was quite pleased with all the various alterations I’d made to the rules; the game worked and flowed at an acceptable rate for my first effort.
There were various things that I hadn’t though of, such as the number of markers needed - feasting, stunned, ducked down/back running, away (and in future games for gunfire noise).
The dice I used for car speeds I’d already envisaged but were still a little larger than I’d have liked (they were 5mm cubes). As the campaign progresses though fewer vehicles will be involved, so it won’t be that much of a problem.

I would of course have liked actual casualty figures and better tokens for the various events, but these will all come in time. It also became apparent that I didn't have any figures to represent the crew of the ambulance (I've since looked around and have only come up with two alternatives - "Warm Acre" do a set of British first responders and the minions from "Crooked Dice" could do at a pinch), but I'm still looking. I'm also still looking about for vehicles, especially an ambulance and typical US police cars

[i] [In ATZ  it’s decided after the scenario whether or not someone turns (a d6 +Rep needing a ‘9’ or better to survive), in FFO it’s decided during the game by a slightly different mechanism in that as soon as a character is stunned or put OOF by a zombie then the die roll is done then and there as above, but if the character will turn then he carries on whilst a die records how long it will be before he does so)
I’ve decided that I don’t like knowing when someone will “turn” or be OK – so I’ve decided on a middle ground, so each turn after a character has a chance to be turned a die is thrown when he would normally activate. If a 6 is thrown then the decision is made.
The character throws 2d6 and needs his Initiative or less to avoid turning, though I am considering revising this slightly)
If he was previously OOF and survives it can be assumed he will lapse into consciousness long enough for anyone seeing him to know he’s OK (my “Harry I’m actually Okay !” rule)
If he was previously stunned and turns then he’ll fall to the floor and immediately turn into a Zombie, activating when the zombies next activate and standing up – even in the same turn –“Harry I’m actually not Okay !”
[ii] I use d20’s for shooting (and for weapons in melee),
The base chance of anyone shooting is a 4
Added to this is the shooters ability x2 (I’ve been considering making shooting skill have a scale of 1 to 10 rather than my current 2 to 6, which would mean simply adding your skill rather than having to double it, but it doesn’t quite fit in well with the head shot rules against zombies)
There are various other additions and subtractions to be made to the chance to hit, according to both the shooter’s and target’s situations.
In the above example, Officer Hallihan has a 4 (basic) equalling +8 (2 x Shooting ability 4) +1, (shooting a zombie) and so needs to throw under a 13 to hit.
She threw a 19 and a 2 giving her one hit. Had she threw a 13 she would have hit the Doc (firing into a melee). The head shot was achieved by throwing under her skill of 4 on a d6 (Zombies are easy to kill rule).

That concludes this scenario, let me just say "Welcome" to my latest follower "Hobbyworker" whom I hope finds something here of interest.
I received an interesting email from a fellow zombie enthusiast and as a plug for him here's the gist of it:
"...you might be interested in a rule set I am currently creating. It is free to download and I could use some feedback if you have the time. You can find the rules on the google community (link below) along with some video battle reports I made on my youtube channel."

Lastly, as always your comments are both welcomed and appreciated

Postscript:
Some of you may not yet know that fellow Blogger and friend Bryan/Vampifan (Vampifans World of the Undead) was recently hospitalised and has undergone surgery.
I'm sure that, like me, you'll all wish him a speedy recovery.
Posted by Zabadak at 05:48