I make no apologies that this post will be fairly verbose as I try to explain some thoughts on how I wish my campaign to “feel”, though I've kept most comments to notes at the end, should you just wish to read through the "action".
Rather than following the story of one character or group I’ve decided to give the bigger picture of the city.
As a first outing for my rule changes and amendments I wanted to take a little more time over the game and it turned out to be much more time consuming than I’d thought it would. This was not only due to me wrestling with the tangle of rules from ATZ and FFO and my own but also I hadn’t anticipated how many notes I’d need to take to explain everything I wanted to and how many photographs I’d have to take to show the action.  I know how much readers like the photographs, so I won’t be scrimping on those.

The City of Perdition has sixteen urban and suburban districts surrounded by the eight rural districts that make up Harbinger County. USA
This action takes place in one of the urban parts of the city, it’s mid afternoon. There are no PEF’s (potential enemy forces) not are there any “players” in the true sense, that is to say the population’s actions are entirely decide by the dice and some obvious choices.
A lot happened that didn’t affect the actual “action”, civilians and vehicles moved on and off the table throughout the game, not all of which have been shown, but can be deduced from some of the wider shots.

Turn 1
Initiative (1d6): The civilians threw a 3 and the Zombie (Old Jimmy) threw a 5, which in my game I ADD to their Initiative rating to give final scores of Civ: 6 and Z’s 9. [i]
(The raw dice rolls for initiative will also determine events in future games.)
Had the Civilians won the initiative then I would have deemed them to have just moved to their starting position and then it would have been the Z’s turn in any event)

After initiative the zombie attacks its victim (and with it came the first frantic search through the rules for a solution to the first “problem” - see note[ii] )
In melee the zombie and Millie each get 3 dice per their melee ability.
In my games humans don’t get the single automatic success against a zombie as I wish to make zombies a little more fearsome than they are in FFO and not just a hindrance.
The results of the melee were: Millie 1 success, Old Jimmy the Zombie 2 successes, the impact die after the melee indicated Millie was out of the Fight (OOF).
This action concluded the Zombie initiative for turn 1.
The civilians in the area now have their activation.[iii]
The only other person of note in the area is the occupant of the silver car, which when diced for turned out to be a single woman.
She sees the Zombie and I suffer the same dilemma as above over what she does, (see note 2).  All dice results indicate she should charge into melee but she’s in a car currently travelling at speed[iv]
She therefore slows to a stop and gets out to confront the Zombie !


Turn 2
Initiative results: Civilians 9 and Zombie 6, the civilians move first.
I’ve adopted a convention of moving all vehicles first before pedestrians.
All the civilians on the table were moved.
Only the civilian driver from the silver car (now named Anne Nhon) had a decision to make, having passed the Zed or no Zed test, she immediately failed the Brown Pants roll and stood for the time being.
Five citizens entered into range of seeing what would become the Zombie Feast

After moving all vehicles and civilians on the table I again diced to see if any new vehicles or civilians entered (a 5,6 on a d6 indicating that a vehicle would, whilst a die roll of 1,2, 3 indicated a single civilian, a 4,5 indicated two and a 6 indicated 3. – further dice were thrown to indicate which side of the street they would be on etc.).
Old Jimmy the zombie’s action was mandatory in that he had to start his feast.[v] – on poor Millie. 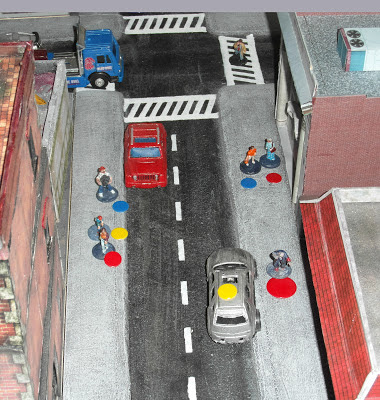 The zombie’s action of feasting also meant that all within range had to take the “test of seeing the feast”. [vi] In the game I replaced poor Millie with a large red counter. Seeing the feast, results in two civilians running away (indicated
by a red counter), one civilian ducking back (yellow counted), and two civilians stunned (blue counter)
The erstwhile have-ago heroine Anne Nhon in the silver car also erred on the side of caution and ducked down back inside her car (yellow counter).
It can be seen from the photograph that “Jimmy the Zed” has his back to these newcomers to the party and so no Zed or no Zed tests were taken.
I justified this by thinking that from their point of view, he could equally have been a mugger or trying to give help to an injury on the prone victim (mouth-to-mouth anyone?).
The driver of the red car is more than 6” away from the feast and it’s debateable whether or not he could see it due to the silver car blocking the view.
To get this far into my game had taken about two hours and I was quite done in, having moved figures and vehicles about and taken 2 pages of scrawl which only just passed as notes. The write up has taken about twice as long.
The scenario has actually been completed and part two will follow next week.
[i] I use five characteristics for figures, more or less in line with what I’d came up with about a year ago, I feel any more would be too cumbersome.
Initiative (a general catch-all for everything the other characteristics don’t cover)
Leadership (for interaction with others and in groups to determine whose Initiative to use)
Shooting (for all (non-exotic) firearms.
Melee (for all brawling and hand-to hand combat)
Driving (For driving all vehicles)

Zombies always have Initiative 4 and Melee 3 .

For this encounter and for ease, all Civilians have a characteristic of 3 for everything, the Emergency response units were determined to generally have 4’s.
Civilian vehicles moved at a more or less constant rate of 12” whilst on the table.
[ii] First the victim (whom I’ve called Millie) has to take a Zed or no Zed Test, with three possible results:
ATZ: Carry on; take being charged test; zombie charges with an advantage,
FFO: Take charge into into melee test;  Zombie charges and you can take a shot; zombie charges.
The ATZ being charged table again has three results:
Have a shot, melee normally; melee normally; retire (ie runaway)
The FFO Charge table has four possible results all basically ending with a melee
The ATZ result of “carry on” doesn’t make sense when the zombie is charging you – (Carry on being charged?) whilst the FFO results all end with a melee with no chance of running away.
I opted for the ATZ result and allowed poor Millie to take the being charged roll, but alas she opted to stay and fight !
However in FFO she would also have to take the “Citizens Brown Pants – Part two” rule which gives two possibilites: got to the charge table or runaways and got to the breaking off melee table (there are two distinct sections of rules in FFO for this which is highly confusing as one refers to characters and the other to Grunts, but both could easily be rerering to a Player’s figures)

[iii] Both cars and civilians reaching a junction throw a die to determine their route, civilians move 6” per move (Zombies move at a rate of 4” normally but 6” if within 6” of humans”.  I felt a movement rate of 8”/6” was too much given the size of table generally being used. On a four foot wide table a human moving 8” with fast move can clear the edge of the table in 3 turns from anywhere on the table and with smaller boards even faster.

[iv] It’s a speed of 2 (12”). Each “speed” a vehicle does equates to a 6” mandatory movement” in my driving rules. Vehicles can go up one speed per turn or down two. They also have a “bonus” die of 1d6” which drivers can use all, some, or none in their turn. – This enables a bit more precise movement.

[v]  Normally, in ATZ, the zombie feast lasts a number of turns equal to the throw of 1d6 but I really don’t like the predictive nature of this. Instead I determined that a die is thrown each turn after the the feast has started to see if the feast is concluded, a 5 or 6 on a d6 indicating that it has. This obviously means that you can’t predict or know when it will conclude.

[vi] Both ATZ and FFO have similar results although ATZ take two tables to get there.
ATZ does have a chance to “Carry on”, whilst FFO doesn’t’ and FFO doesn’t have the “Hunker down” reaction.
I prefer the “cleaner” FFO version (but see note iv above.)
I also consider the feasting of zombies on a fresh corpse to be a mistaken view of a zombie’s frenzied biting of its victim, to try and make sure the victim is infected.

That's all for this week then except to welcome my latest follower Phil C, I hope there's something here to interest you.