As the title says, "Welcome to Perdition" and smallish city in Harbinger County.
This set-up will be the one I'll be using for my first test-game, which I'll report on next week.

Although the photograph shows six of my smaller  terrain boards (two foot by two foot), the playing area will be slightly smaller as I'm discounting both the top and bottom six inches or so of the short ends. 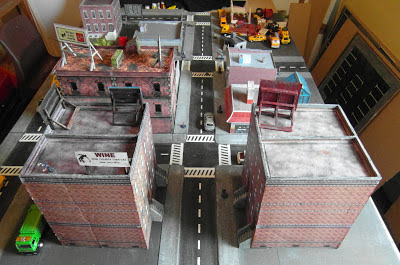 The outbreak hasn't yet started in any big way for this scenario, think of it as Apocalypse day minus1.
I wanted a fairly urban setup with six easily defined areas for the single zombie in the scenario - He by the way can be seen on the roof of the building in the bottom left of the photo. I'd placed him there solely for convenience and forgot to remove him for the photos.
He'll be playing the part of  "Old Jimmy"  a well known "down and out"  in this area  of town. 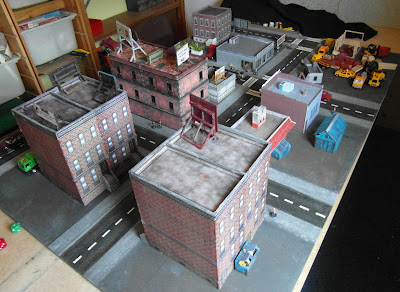 The table wasn't completely set-up randomly, I used dice to determine all manner of things.
A d6 was thrown to determine how many civilian types were present on each road segment, then again to determine which side of the road they were on and lastly to determine which way they were walking etc.
Similarly I threw a d6 again for each segment of road, twice for vehicles, once for each side of the road.
A d6 determined if there was to be no traffic (1, 2 or3), a single car (4, or 5) or two vehicles (needing a 6 !)
I haven't got a lot of vehicles and I didn't particularly wish to have regurgitate them as they left the board at one end and entered in the opposite end. 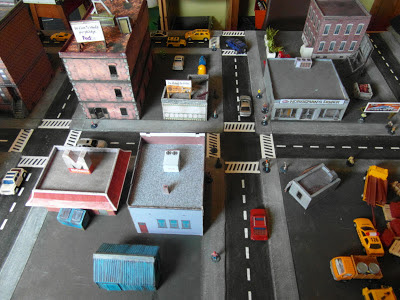 The photographs roughly follow an anti-clockwise view of the table, with the well-known (at least here they're well known) of the McDoom's Franchise (soon to come under new management), the Horseman' diner chain and Nippers newsstand empire.
For this particular game I'll not be defining any of the civilians, they'll all have the same stats to begin with.
I, doubt I'll be naming any of them either until after the game though "Sid the Sweeper" is present on the table somewhere, but no clues as  to exactly where !
Yet another view of the same set-up 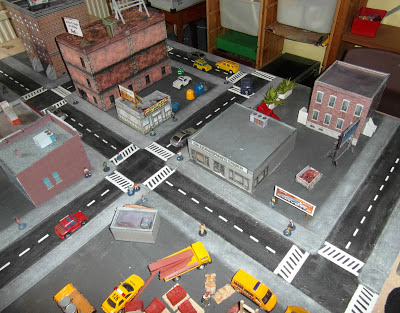 As mentioned above, the road in the right of the photograph will play no part in this particular engagement. 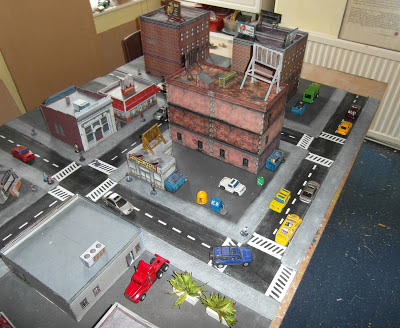 The vehicles that can be seen not on roads are merely there to fill up the space and aren't necessarily part of the game. This photo also shows my quick attempt at some greener, using a couple of left over foamboard boxes from my supermarket build and some loose plastic foliage. 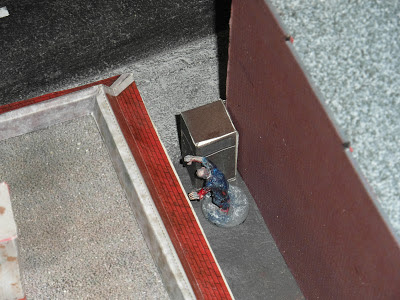 "Old Jimmy" lurking behind the vending machine between the bank and McDoom's  burger joint. 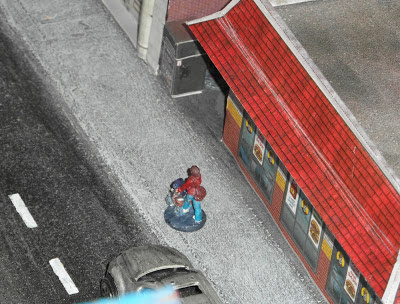 And the final photo showing his first potential victim, Old Jimmy's base can just be made out.

Next week I'll hopefully be showing the results of my first game (or games?), it'll be a pretty simple affair but it will give me the opportunity to show some of the many rules I've changed, amended or altered.

Finally let me take the opportunity to welcome my latest followers "Doomonyou" and "Phil C", hope you find something here to interest you and as always your comments are both welcomed and appreciated.