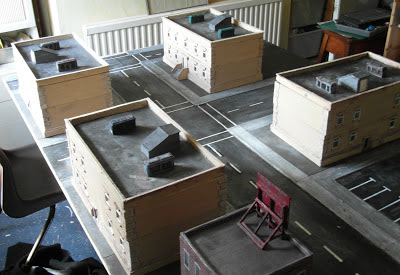 As a pre-empt to my campaign I've been tidying up ,my playing board/work area and playing with a couple of trial layouts to show the models I've built all in one place.
This first shot shows the four "tenements" that I featured in last week's blog, just to prove that I did actually have them. The more astute viewers will notice that the one in the foreground has it's roof on back to front... Oh well. 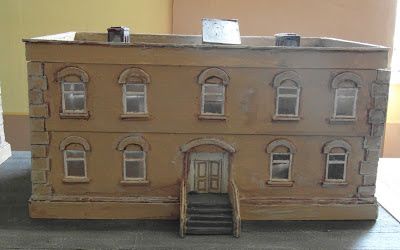 The first building has a set of double dooors and arched windows and with the photo below, best reflect the true colour of all four buildings. 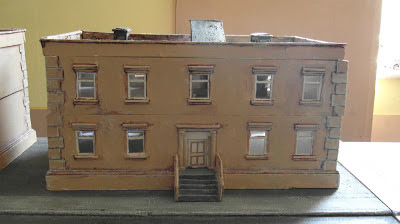 This second building has a single door flanked by two columns with the window lintels squared off. 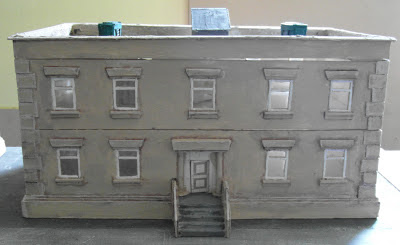 The third building again with a single door flanked by columns with angled window lintels. 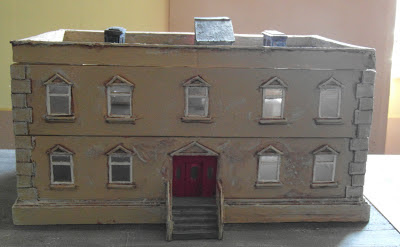 Finally the only building to have its doors painted, the lintels this time being triangular (obviously).
Although I've called these tenements since starting the build my mind isn't completely made up as to their future purpose. Originally there were to be four apartments in each (two up and two down), but since finishing  the structural exterior I had other thoughts on their use. So far I've decided one at least will be four apartments and I'm considering another to be a single house, allbeit a bit grand. (I'm sure someone commented on the lack of a "nice" area). Another building I've thought could be used as offices and the fourth as offices downstairs and an apartment above (a Doctor's or a Dentist's practice perhaps ?)
I haven't shown any shots of the backs of these as they are truly indistinguishable .
To finish off this week's blog here's a couple of shots of my trial set-up using the tenements. 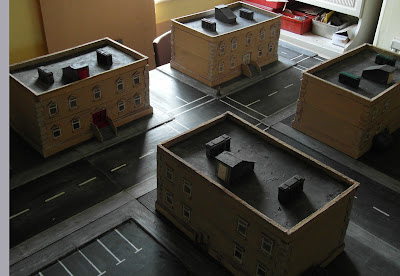 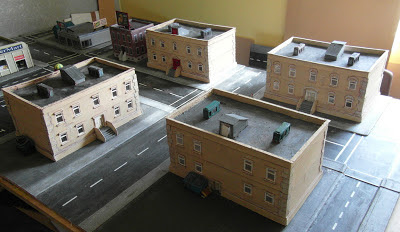 I changed the layout slightly for the next few shots, the most noticeable change being the position of the car-park. 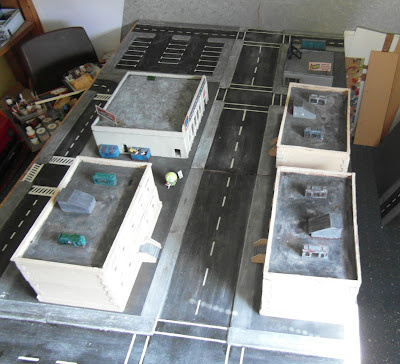 You should also be able to notice the small road to the left of the photo above that's not present in the other photos above. 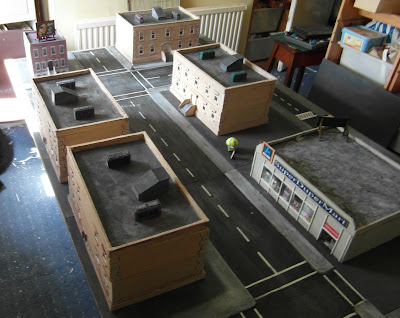 You can play "Where's Sid ?" on all the city-shots, he's there somewhere but I can't spot him either. 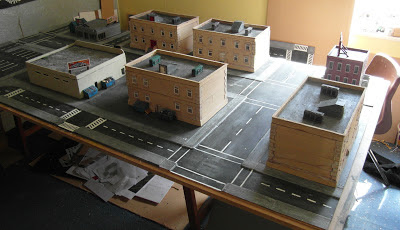 The last shot shows a fairly good overall view of the table, it's eight foot by 4 four foot (2440mm x 1220mm) with just enough space around to be able to walk and sit.
As for last weeks "mystery", it should now be solved and yes the tenements are big buildings. (sorry C6).
Next week I'll be having another re-arrangement of terrain boards and using the buildings I've got that haven't used in these shots.

I don't think I've any new followers to welcome this time around, but in case I've missed you somewhere along the way "Welcome".

Finally as always your comments are both welcomed and appreciated.
Posted by Zabadak at 08:08