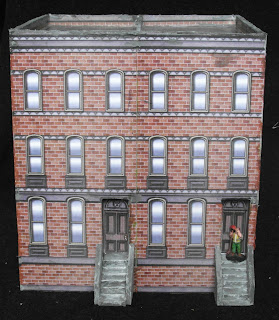 The title to this week's blog is really a play on words as the term "flats" refers not only to the British use of the word referring to apartments, but also to the theatrical use of scenery.
To pad out my board with scenery, I've made a few shells of buildings. That is to say that they're nothing more than four walls and a roof.
The photograph to the right shows my first attempt.
The original building comes from the Microtactix set "Twilight Street Set 2 - Apartment". I've done a few things to the original to better suit my needs, hence there are no windows on the sides of the building , nor are there any basement windows, both of which featured in the original.
The original model is more suited to smaller figures rather than 28mm figures so I also enlarged the orginal by about 50%.
The original model measured about 8cm wide by 15cm deep and 19cm high whilsy my enlarged version is approximately 12cm x 22.5cm x 28cm. 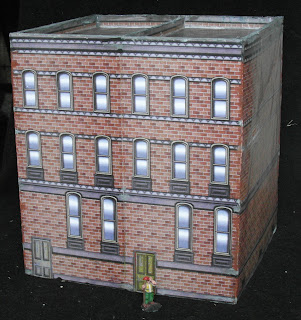 I've also put two models together to make a larger model still although internally there is no dividing wall.
The model is made from printed sheets stuck to foamcard, but the front steps were entirely scratch built from foamcard.
It was much easier to build he steps from foamcard as my attempt at paper folding steps was bad, very bad.
I also noted that the top step went directly to the door, rather than having a small landing, which I thought wrong and I've allowed for just such a one in my model.
Of course, two  apartment blocks don't make a neighbourhood, so a built another model of the same block. 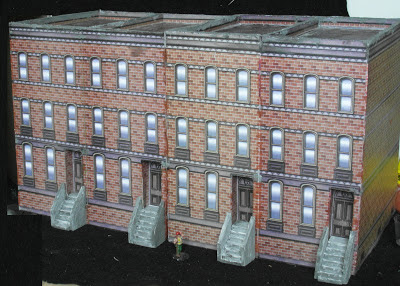 I fully intend to make at least two more of these models , they were quick to make and fairly easy for me as I really didn't have any measuring to do.
The edging is a bit rough and ready in parts and the roofs really do need some roof furniture to set them off, even if its just roof exits, but they're usable enough for me as background scenery as they are.
Other than the printing time,  I spent about a couple of hours on each build about an hour making the steps and probably a further hour edging  and finishing off the roof.
These were the first of several shell-type buildings I've been working on amongst other on-going projects.

That's all for this week, I only have to welcome my latest follower "The Happy Whisk" and to say as always, comments are both welcomed and appreciated.
Posted by Zabadak at 07:05