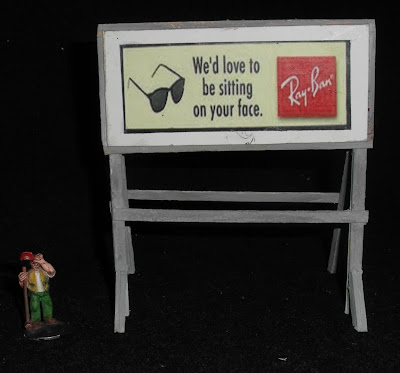 The world is now a much brighter place, but I haven't managed to do anything at all over the last week, luckily though I had allowed for this situation and split my finished billboards into two posts for just this situation.

Here's another of my larger sized, free-standing, billboards, probably not suitable for the roof-tops of buildings.

The construction of this and all the other ones I've made follow the same lines, namely coffee-stirrers, either glued together in strips of four or used singly for cross-braces.

All the actual "Bills" were taken from the Interweb and most, if not all, had to be photo-manipulated in some way or other as they were all taken from real-life ones at an angle to the viewer etc.

The above two photos show the same signs, obverse and reverse. The Wine one is not one of my favourites, due its lack of colour, but I do like the Planters one. 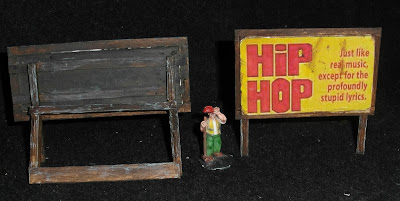 Another pair of signs, the Hip Hop one is probably my least favourite. The Fisher-Price billboard has a lolly-stick glued to the bottom of the rear supports, this was for the extra weight to keep it stable.
All the smaller boards have a tendency to easily topple forward, but that shouldn't be a problem when they're butted up against the parapet of a building roof. 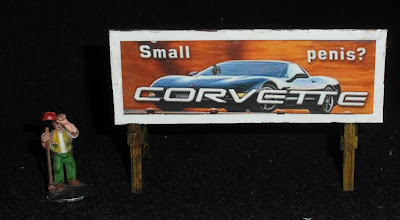 The final billboard of my current batch, nothing spectactular, but it was one of the last batch (I made them in 4's) which were made altogether as a sort of production line, rather than individually.
Finally here's a couple of photographs of posters that I haven't turned into billboards.
The first two have  a backing and surround, whilst the last two are merely prints.

The American Kennel club one features in one of the first batch of billboards and may end up just stuck to the side of a building.

These two could end up just stuck to the side of buildings too, with a suitable backing.

I don't think I'll be rushing to do any more Billboards in the near future, twelve (with a potential for sixteen) is more than enough.

Laslty let me welcome my latest followers "Clearco Miniatures" (you can find their site here - it's well worth a visit) and Alvaro, here's hoping you guys find something of interest here. If I've missed any new followers. sorry, (I blame the drugs)

That's it for this week, as always your comments are both welcomed and appreciated.
Posted by Zabadak at 07:56