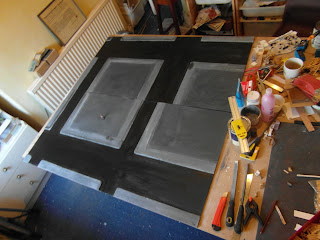 Well, now that the disruptive shift-changes of work in the last two weeks is finally over and my back isn't playing up so much any more things should return to normal.
I, of course. had a very sombre and pious New Year and now that the hang-over has finally cleared I can think about trying to do something  to progressing my zombie project.(anything would be a bonus)
These two boards were made in the same way as all my other my  terrain boards, namely 4mm (thereabouts) xork pavements and raised areas onto 6mm MDF. 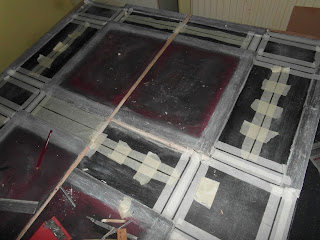 They, of course follow the same principle of painting that I've used in the past and currently one of the few things I didn't have to worry about painting.
I could use a three inch brush despite my poor eyesight and didn't have to worry unduly about any detail (there isn't any)
The finer detail, such as it was, was achieved by the liberal use of masking tape.
I did have a problem I mistaking brown paint with  grey and hence the very red appearance of the "ground" areas.
It was sorted out later of course.showed.
The reasoning behind making even more terrain board was that these would feature wider roads.
They're actually twice the width of the roads I've used on the other boards, being 200mm wide rather than 100mm.
They will of course still tessalate with the other boards and with themselves, although the photograph seems to  argue against this, it is merely because of the orietation of the boards.
With these two boards I can now have a wide road the length of my eight foot table or a six foot length of road with a wide "T"  junction at one end.
I painted the junction road marking differently to my other junctions just for variety.
The boards themselves are 4 foot by 2 foot (1200mm x 600mm). I still have another wide raod section to make, though this will be on 2 foot square board and I also have three other terrain boards, but I've yet to decide what to with them - there's two of the larger variety and one more of the smaller square types. One of the larger boards will almost certainly be some form of green urban terrain,
Posted by Zabadak at 09:07