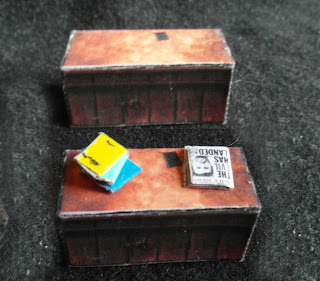 It would have been fairly easy to have picked a better title for this week's blog,  but I've gone with the mundane.
Last week's blog featured a few books I'd made to enhance a desk and the photograph to the right shows a similar idea, the model also features a newspaper which I've made.
The model desk is another of my early attempts at making a card model (WWG I believe) and is in fact the same desk and not two desks.
The idea to make books started quite a while ago and I used up any paint still left on a brush  before finally having to wash the brush out.
I started with a rough rectangular grid on paper and filled it in as time went by. 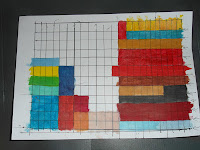 The grid was not measured in any way., though an effort was made to keep it at 90 degrees.
The next step, once all the sheet was filled in was to cut it intoi strips. 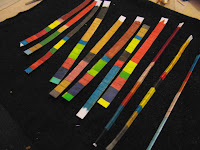 I cut most strips the length of the sheet and a few the width of the sheet. Lengthways cuts would give me books more or less the same width, whilst strips cut width-ways gives me books the same height; both have advantages and disadvantages, though I prefer the length way cuts.
The photograph on the right shows the strips, with three of them folded, ready to receive the middle. 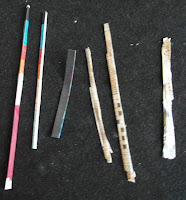 For the next step I cut and glued several layers of newspaper.
There was no need for any great degree of accuracy here. 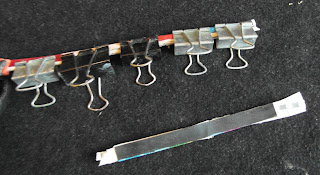 In the photograph can be seen a black strip which has not been folded; this strip was going top be treated in a slightly different way.

I next glued the paper inserts into the folded strips and used clips to hold their shape whilst they dried.

The black strip didn't need clips at this stage, as the newsprint was glued directly onto it. 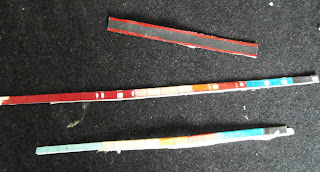 Once glued (more or less), the strips were trimmed of excess newspaper and I did some painting on the "books" to represent titles, pictures, authors etc.
It'll be noticeable that the black strip got slightly different  treatment to the other strips. 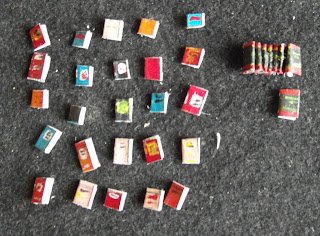 After finishing what little painting I thought appropriate I cut and trimmed the books from the strips. Books that appeared too tall were merely cut in half and made two books of a more acceptable size.
The black strip again got a slightly different treatment as I cut these to the same lengths; as they would represent volumes of the same set. They were then stuck together, as if on a shelf and a bit of detailing added to them.
The final results can be seen on the photograph.
I did varnish the books and hence the glare , but the overall effect I think is pretty good considering that the smallest ones are about half a centimetre square.
All the books in the picture came from just one strip  and I've got a lot of strips !

That's it for this week and as always, your comments are both welcomed and appreciated.