I, probably like many others I suspect, have many projects going on at the same time. 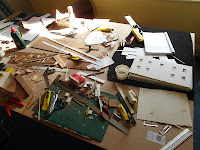 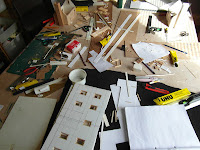 One of my problems is that when I'm building something I do like to not overdue it and let the model "rest" for a while. This is really to give all recently glued parts time to thoroughly dry out as handling models (especially large ones) too much I've found can lead to all sorts of problems.
The consequence of all this is that my wargames' room table looks like the above two photographs most of the time (yes, there is a table somewhere beneath all the crap). A few of my current projects can be seen in the photos, but I'm not going to going to expand upon these until a future date. 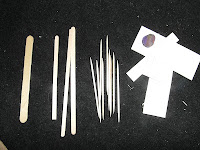 One of the side-products of having so much going on is that there is a lot of "rubbish", offcuts or whatever left over and I'm a great believer in "It'll come in handy", so I tend to keep most of the bits and pieces, in the hope that they'll be useful - one day.
Some of the stuff I've used recently is shown in the photograph on the right: Lollipop sticks, coffee stirrers, cocktail sticks, cardboard and modelling putty (it used to be called plasticene when I were a lad). 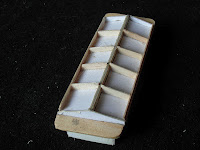 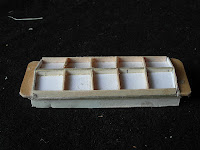 Don't ask me why, but I was inspired to build a fruit and veg stand from the above bits and pieces (plus some newspaper and plastic balls from a pellet gun). Amongst my many current projects I do have a small shop that needs outfitting at some time and this could be used for it but it's probably more suited to a supermarket. The two photographs above show it in its raw state.
Adding the bits and pieces to the various units for the fruit and veg wasn't as hard as I though it was going to be. 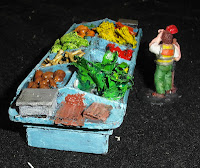 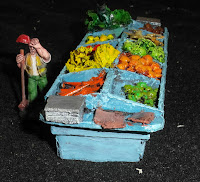 Here are three photographs showing the finished article along with Bob (I've always thought of him as Bob the builder even though he's probably a road-sweeper), for scale.
The model is about 12cm long (4.5") and about 4cm wide (1.5"). It is about 25mm  (1") tall to the highest point on the centre divide. 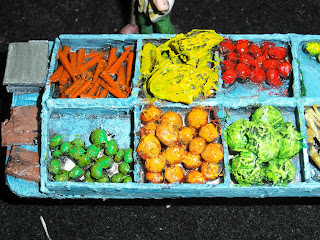 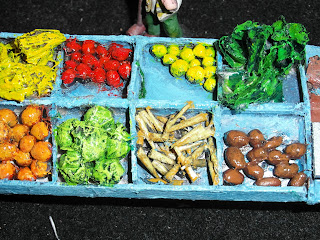 A couple more close-up photographs to show the my attempts at various fruit and veg.
I've tried to represent carrots, bananas, apples, lemons, parsnips, oranges, cabbage, lettuce and potatoes with varying degrees of success. These were chosen simply because of their ease to make - pineapples were right out !
My biggest disappointment was with the bananas, but I was quite pleased that most everything else came out ok. As is the way with these things, everything is over scale by necessity, but it's not too noticeable.

At each end of the stand is a small shelf that I decided to put on representations of brown bags and a scale mainly because it looked too bare and I couldn't think of anything else to fill the space with - I thought it would have looked a bit strange just left as it was.
Some of the products have been given a gloss varnish, but most are varnished in  matt although this doesn't really show up very well in the photographs (I blame the rubbish photographer). 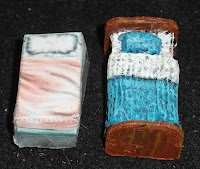 My next mini-project will be the mass production of beds made from scrap bits and pieces. The prototype is shown here in this last photograph, alongside a WWG bed for comparison.
The bed took me about an hour to make and paint; for a first -time effort I'm quite pleased with the result.  My paint-job is of course up to my usual standard (one step off piss-poor), but in my defence it was a bit rushed..


That's all for this week, and as always comments are both welcomed and appreciated, thanks for taking the time to look, I hope that there is something here to interest you.
Posted by Zabadak at 08:43