This is the first in what will probably be several posts concerning the building of my cottages. 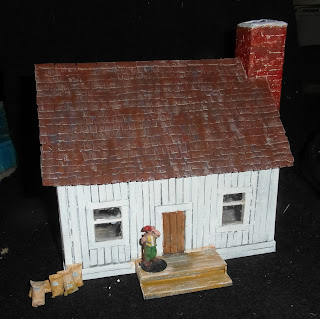 The seed of this idea was probably first sown in Brummie's Blog back in July, when he started making cottages for his NMRIH game.
It was then nurtured by Vampifan's fine rendition of a Stoelzels' cottage on his blog in (and finally I was completely hooked on the idea of some cottages by Colgar6's rendition of  his "Golden Hills Sheltered Accomodation"  which again used the Stoelzels Cottages.

To get my excuses in early, this was a a bit of a rushed paintjob; this last week has been pretty rough for all sorts of reasons and I haven't managed to get as much done as I would have liked, plus I hate painting anyway (buildings, figures, my living room etc.)
As a kind of bonus, here's Sid beside some of the sacks I made (as shown first in last week's blog.). I realised that there was nothing to show the relative size of them last time. 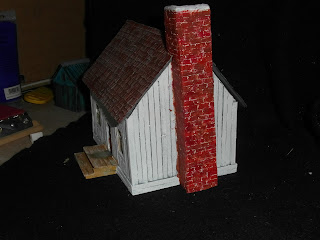 I actually started making the cottages with a friend (who was new to my modelling ways), so this is the prototype, #1 and he has number 2; number 3  is at about the same stage as this prototype and number 4 is a bit "different" and you'll see what I mean by different in a few weeks time.
I wanted all the cottages to be very similar in their general appearance, but each unique in their own way. They all  have about the same footprint of 6" x 4-5 " (150mm x 100mm-125mm) excluding the chimney which is either intergral to a wall (as in this case) or is buttted onto the wall as in cottage no 2) 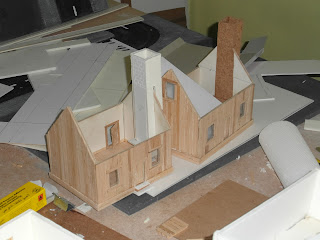 This photo shows cottages  numbers one and two during their construction, each one sits about 10mm above the ground level.
The height to the eaves is about 75mm above the 10mm "foundation" with another 75mm to the roof ridge.
The cottage on the right is #1, that on the left is #2 (my friend's one).
From this photo you can hopefully see that they are very similar, but #1 does have a window in the upper eaves. 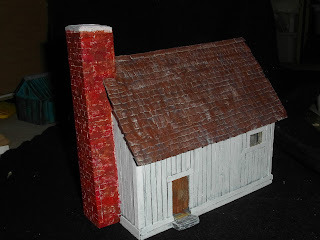 The chimneys are also made from different materials, cork and foamboard; both have different properties and I've used foamboard for the chimney in cottage number 3.
The photograph on the right show the rear of the building, nothing remarkable there however.
As you may have guessed these cottages were all made using more or less the same materials for the main building shell. The ubiquitous wooden coffee stirrers provide the planking for both the wall and the floors of the buildings, but there are other materials too such as the back step which is two pieces of scrap plastic glued together. 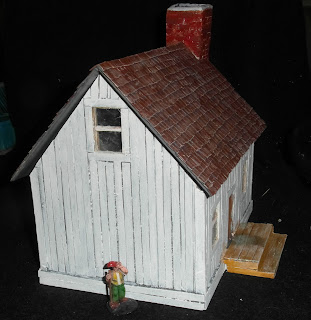 All the cottages have removable roofs (except number 4 for reasons which will be obvious when you see it) and will have detailed interiors, after all, no-one want the wrath of Van Fampi to befall them !
The windows are all acetate and the doors do actually open.
I've finished all internal walls in cottages 1 and 3, including their opening doors and I'm currently scratch building the interiors, although I may have to revert to some of the WorldWorksGames interior props, for speed.
As for cottage number 2, well even I don't know how that is progressing though I've been assured that is is ! 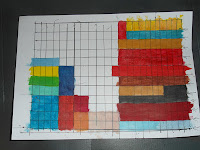 I think that in a couple of weeks I'll have completely finished all three of my current cottages, including their internal fittings. I should also have finished painting my home-made beds (about 16 of them). I've also been working on some tenements whose progress has been stunted by my indecision on their internal designs, but I should have the external shell finished by the end of November. However, like many others I suspect I do get side-tracked into other projects, the photograph on the right is one such one. It's a sheet of thin A4 card, roughly gridded into rectangles, I'll report more on this in the future, if/when the idea comes to fruition !.


That's it then for this week and as always your comments are both welcomed and appreciated and let me take this opportunity to welcome my latest followers SapperJoe and Paulalba - "Welcome !"