Well, my "horde" has increased by 19 figures and here they are! 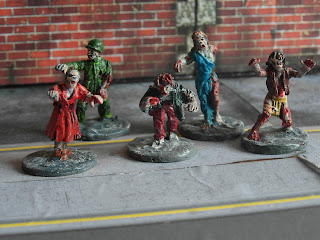 I'm not altogether sure about the basing on them and I think I will be looking to add a little more texturing to the bases at a later date.

These three photographs show all but five of the 19, they are all Blue Moon figures, from Old  Glory UK, although I can't remember which particular set they're from.

The Blue Moon figures are not everyone's cup of tea, due mainly I think to the "ragged kilt" effect on many of them, but I quite like the effect. 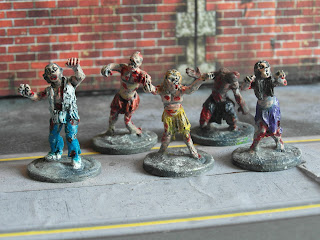 This photograph is quite unremarkable, save for the figure in the back -right which is my first attempt at an African/African American zombie.  It's a bit indistinct and should probably stay that way !

I have mainly used a simplified version of Vampifan's technique for painting the zombie flesh.
I use a normal flesh colour, then apply a grey wash, which does the trick for me.

The eye sockets are of course painted black and the eyeballs white.  Blood and gore are added as one of the final stages (very satisfying doing that) using Tamiya's clear red. 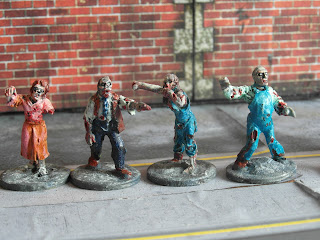 This group shows two of my favourite figures, the two males. The chap second from the left has an excellent head, somewhere between skull and normal (hardly noticeable on this photograph). The other male on the right I think is my favourite out of this batch. I really like figures that are not standard size, by which I mean they're either a bit fatter, or thinner or balding or some such, rather than "normal".

He's obviously been recently zombiefied (that's a real word right ?), his clothing is hardly effected and other than his eyes, his head is almost normal (if balding). 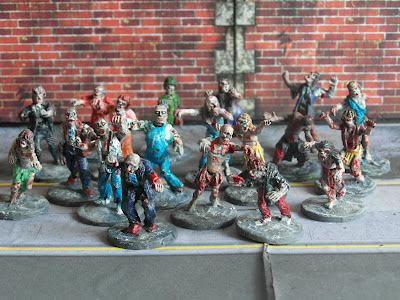 So here's the entire group, including five that were missing a photograph (due to technical problems - that is to say I'm rubbish), in all their glory (?). I'm not the best painter in the world, but I'm happy with this group - My new spectacles, some better brushes, the longer daylight hours and my ongoing recuperation have all helped.


Lastly here's a couple of shots of my entire horde as it currently stands (or crawls, or shuffles). 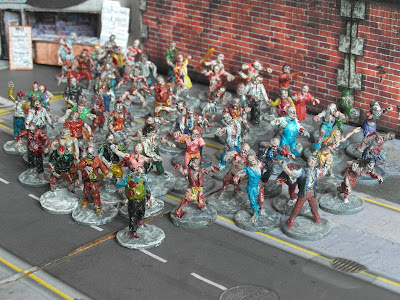 The older figures have all had a gloss varnish, whilst this latest batch have had a "silk" or "vinyl" varnish applied.

I feel this latter effect is far more satisfying than the pure gloss and will probably apply it to all my collection.


The basing on the first two batches is also noticeably lighter, this too will be addressed when I add texture to all my figures' bases.

Sadly, my photographic skills aren't improving much, if at all.

Thanks to all for following my blog and comments are of course welcome.