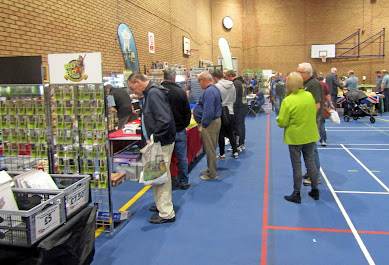 After nearly three years of not going to Wargame shows, it came as a surprise from a friend's FB post on the Friday, before the Saturday that a show was on. After a quick exchange of messages eventually three of us arranged to travel to the show the next day.
An early start saw us arrive in time to join the small queue before the venue opened.
My immediate reaction upon entering was that there were far fewer games and stalls than in previous years and even by the time our little party left, the 'crowd' was much smaller than in times past. I still managed to see a lot of friends and familiar faces around the stalls and games.
Here's the photogarphs:
I have no loot to show from this show, as my only purchases were cake slices for my wife and the evidence disappeared quickly on my return to home.
The show wasn't such a disappointment as might be though, I saw some old friends for the first time in several years, saw some very good games as well as some that were not as good. The predominance of Fantasy wasn't surprising, but their presentation wasn't that good either.
I noticed the usual detritus littering tables, dice, rules, drinks etc. and the lack of prominant notices indicating the game and the participants.
We were there for about an hour and a half and the hall hadn't got any busier to any noticable degree, but we had a good time and it was our first show in well over two years ! Roll on Battleground (if I can get a lift).
Posted by Zabadak at 03:36