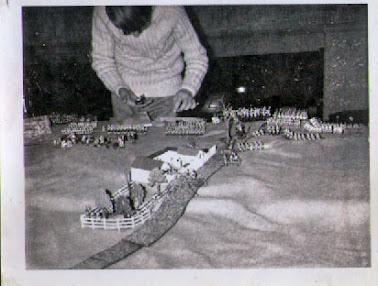 These photographs show my old wargems group's refight of "Waterloo" sometime in the early 1970s (1971 I suspect). The group went out and bought every box of Airfix Napoleonic French Artillery that could be found, specifically for the eight marching French Infantry! The figure were mostly mine, 20mm Airfix with a sprinling of metals, HInton Hunt and a very few Minifigs. The photograph on the right shows the Allies setting up on our 12' x 6' table with La haye sainte in the centre. All the builidngs were underscaled for the figures and scratchbuilt in cardboard by myself.
Here's the rest of the photographs:

The French had taken La Haye Saint in the centre, Reilled had destoryed his corps assaulting Hougomont, which the British had heavily reinforced, weakening their centre and the battle was over.
The game was played over three day's during the Xmas holidays and whilst I thik their are other photographs lost to time, I hope you get some idea of the battle and  yes, it was very enjoyable at the time.

Having not done anything hobby-wise over the last four weeks or so, nexrt week will probably see me posting old photographs of other armies I no longer have.

That's it then, once more for another week, thanks for taking the time to visit and as always your comments are both welcomed and appreciated.