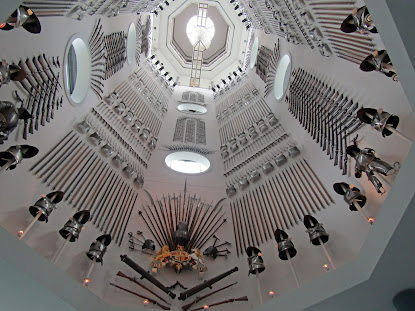 In a week where I've been more than a little remiss in my painting efforts (at about half an hour a day on average) and completely redundant on any building efforts I've recruited a 'stand-by' post of my recent road-trip to Leeds Armoury (sorry).
I was invited by a friend to accompnay him, his wife and my #1 son, in late May for the visit.
Leedes Armoury is free to visit, but you do need to book in advance (Covid etc.).
#1 son and I had been before, just after it had moved from London, but it was a far better experience than the first time -so much had changed in the intervening years.
The photograph above show the main stairwell (all four floors of it - or mayve five ?), showing hundred of weapons, halberds, partizans, spontoons and a host of other weapons, with various armours too, at the bottom are pikemens' armour (with tassets) and at least one set of cavalry armour - all 17thc from what I could tell.
Here's the rest of the printable photos (in no particular order):
Obviously I took more photographs of all my current interests, but there was something for everyone.
Here's the best of the rest:
Jimland anyone ?
Over the five floors and interveening mezzanine floors there was a lot to see. I took us four hours or so to see everything, but would have taken twice as long if I'd read even half of the information available - but I did get a museum guide too !
It was an exhausting day, but well worth the effort with quite a few very surprising exhibits and even more exhibits that surprised me!
Seeing the western weaponary was eye-opening as to just how small most of the pistols were (even the Colts). Winchesters looked like toys compared to rifles that I've held (and in some cased used) which made some food for thought.
The venue is definetly a full day out, but I'd concentrate on my own current areas of interest if I get to go again, this time reading more ! Maybe I'd also get to shoot a crossbow (that particular activity was unvailablee- covid 'yawn'.)
There's also a very good cafe on the ground floor with a  exhibit hall adjacent to the entrance that holds various events throughout the year.
I hope you've found something of interest, and I didn't even mention the maching guns, the cannons outside the venue, the mortars inside or many, many other interesting exhibits.
That's it then for another week, I better had get a move on finishing my first batch of Mexican bandits for next week, but on the plus side I now have enough credit card types to start basing up my forty-something horses.
Thanks for taking the time to visit and as always your comments are bith welcomed and truly appreciated.
Posted by Zabadak at 04:59