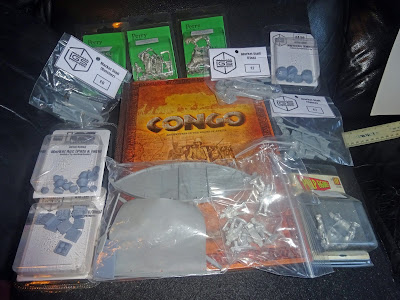 In an effort to give me time to finish and post something relevant to my current Sudan project, here's my modest haul of loot from Battleground 2019. I should thank Dave Thomas (Perry Minis) that he didn't have the other seven or eight pack of figures that were on my list  as I spent well over my budget !
Though it may look like quite a lot, there is only a smattering of figures - a mere 19 !
From the pic above, probably the most obvious item is the "Congo" rules, which I've been interested in for quite a while and are now available in its second print.


From Dave Thomas, a few additions for my Sudan project, Mounted Officers and a Dervish Cavalry Command group - the latter's   horsemen that I'd wanted were unfortunately (fortunately ?), as were the four packs of Bengal Lancers...

From the wonderful folk at Iron-Gate Scenery I managed to fill all my list:

From Ironwind I got a couple of Explorers for duties in "Jimland" and two deck guns and crew (yep, I too was surprised when I found these on a mostly "steampunk" stall! 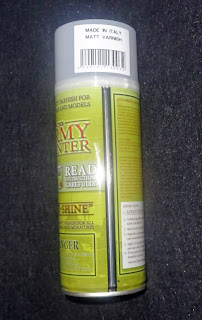 Can;t remember where I bought this can of spray matt varnish from, but as it was a couple of quid cheaper than I'd seen previously it went in the bag under the label of impulse buy, along with yet another pot of white (the search for a decent white continues apace)


That concludes the loot count from an excellent (and expensive) day out Battleground. The relative small number of figures bought  does mean that they may even get painted, though the cavalry will not be at the top of the queue!

In other News, I've managed to get in about 15 hours of painting my Egyptians and British foot, bound for the Sudan, but they still have a long way to go. I did lose a day of painting due to Xmas shopping (keeping Swmbo sweet) and this week will see yet another day lost to yet another Hospital visit ! This was an unexpected appointment and hopefully they will find nothing wrong this time - fingers crossed !

That's it then for this week, I wish I'd had something more interesting to post about, but as always your comments are both welcomed and appreciated !