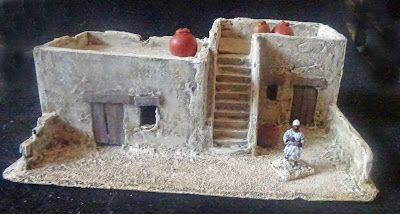 This week I've been making some more progress towards finishing some buildings for my Sudan project. The large Souk building was gunked up, dried out, and sanded down. Doors were all finished off and mostly painted, but the biggest step forward was finishing off the first (practise) building  made to a level I was happy enough with.
The photograph on the right shows the completed model.
To get to the final stage I washed the original model in black (though in future I'll be using a very dark brown), then a sandstone wash, followed by a magnolia (ish) colour (I'd ran out of magnolia and used the closest I had); next was the final white dry brush to highlight everything. The white is not a brilliant white but rather a very, very ,very light grey imo. (It's called either chalk white or moonlight white)


The internals, haven;t had the same attention as the exterior, but will get a small amount of attention when more buildings are finished.
That's it then one  adobe build down and lots more to go !

I ordered some bits from "Frontline Wargames" - superb service and outstanding resin casts, for  a very reasonable price. Their Wild West stuff has everything you could imagine needing for a western town.
Here 's some photos of the things I bought with the Sudan in mind  !

In addition I also bought some civilians figures from "Eureka UK", again, wonderful service and excellent figures:
So I have some salesmen for the Souk and some beautiful women to go shopping.

My adventure in Techy Land during these two purchases would fill a post by themselves. One of the order forms had pale yellow check options which I didn't always notice and my PayPal account wouldn't let me log in (since fixed), but eventually everything was sorted and the Interweb gave a sigh of relief (as did my daughter who had sorted it all out for me) .

I 'll be taking advantage of the added hour of not having to pick up my granddaughter and do some figure painting this week and making up for losing the weekend to a mandatory wedding attendance.

So that's it then for anther week , thanks for taking the time to visit and as always your comments and both welcomed and appreciated.
Posted by Zabadak at 08:20