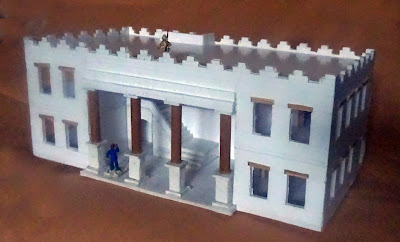 In a week which saw my Interweb intermittent for more than four days and the usual aches and pains, I've managed to get a fair bit of hobby time in. I've finished the major modelling on the Building I started nearly a month ago having finally decided what its internal layout would be,  and yes, I used to be fairly indecisive but I'm not so sure now).
The photograph on the right and those following show the mostly complete model.

This building has a footprint of about 16" x 8" (40cm x 20cm) and an overall height of about 6.5" (about 16.5cm) - so it may not be the biggest model I've ever made, but it is BIG !
In addition to finishing the majority of the construction of this build, I manged to knock together a shell of another adobe  dwelling from the bits left over from the 4 sheets of A2 foamboard.  (that's the equivalent of 16 sheets of  A4 !). Here's the photographs :
This latter model had to have some immediate remedial work done to it in the form of emergency filler to fill the huge gaps and to keep it together (it'll be all right on the night - as they say).
The normal bits of stirrers for window lintels have been added to all the buildings made so far  but the lintels for Chez Gordon had a minor bit of detailing added:
I've also made inroads to mass-producing doors for the various buildings and it wouldn't be one of my builds without numerous coffee stirrers,.
I'm very happy with this last week's progress, managed even despite real-life considerations constantly trying to hamper all my efforts.
I also proffer my apologies for what I consider to ave been a very rushed post this week - an unexpected,  last minute hospital appointment (today) meant I was very rushed to photograph, edit and produce this post (and of course the cameraman was as rubbish as ever).

That's it then for yet another week, thanks for taking the time to visit  and hopefully finding something of interest. As always, your comments are both welcomed and truly appreciated.
Posted by Zabadak at 08:33