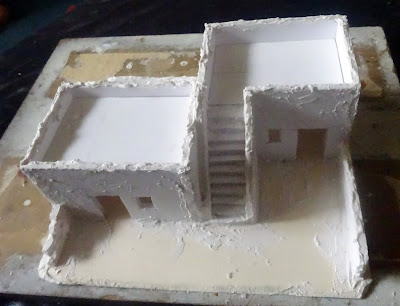 After last week's post my overall well-being has not been as good as I would have liked and progress, though bountiful (by my standards) hasn't been as plentiful as I would have liked nor as I had expected. Nevertheless, I have been a chap, be it in fits and starts.
Herewith then is the photographic record of this week's efforts on my adobe-style buildings suitable, of course, for many different geographical areas - Africa, Afghanistan and Mexico - anywhere where there are desert-like environs it seems.
The photograph on the right shows my first "experimental" effort, just after the initial 'gungeing' phase.
First off, two simple four walled building (3" x 4" footprint) that differed only slightly in height; two walls of each were rabbeted at either end for a neat join.
A four-sided 'box' of a building is pretty boring, so adding bits to a simple house makes it a far more interesting model imo (as well as some extra detailing of course).
The very flat, smooth, roofs still have to be finished off and doors have to be added too. and hten they will have to be painted, of course.
The second model I've been working on is my idea of a Souk (Arba Market) using discarded peices from my third building (its layout is still being planned).
This is a rather large building, more for a city or large town.
There's a not long way to go before this building is gunged, sanded and painted and I'm pretty pleased with its progress.
I'll be making a couple more simple buildings, probably 'L' shaped and tackling the largest planned building once its layout has been finalised in my mind.  - Do I really need/want a balcony?)
I'll also be putting a hold on painting any of the buildings until I've made a few more and until B&Q match my paint, now that they've ceased to stock "Harvest Field" !

Other than the first photograph, all the others are in date order showing progress.

That's it then for this week and hopefully my new, additional, medication (with known side-effects) won't be too much of an obstacle to further progress.

So that's it then for this week, this style of building is very easy to make, even for novice scratch-builders, it just takes thought, careful measurements and straight cuts!

Thanks for taking the time to visit, I hope that you've found something of interest and of course, as ever, your comments, criticisms, queries, bouquets and brickbats are always welcomed and truly appreciated.
Posted by Zabadak at 06:12