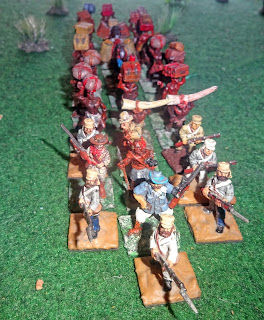 As I've not finished any thing this week, despite my best efforts here's another of Max's !adventures in Jimland", played several weeks ago. I've also GM'd two expeditions with #1 son as the explorers, which I'll write about sometime in the future.
In the meantime, once more:
From the journal of Frederick Cartington:
"With the success of the last mission in mind, we set off with a slightly better supplied expedition than is usual. Our explorers were accompanied by six soldiers a muleteer (leading two pack animals) and enough food for about a fortnight. With extra trade items, a moderate amount of ready cash, medicines and ammunition we were in high spirits indeed.
Max's plan was to head back northeast and to follow the lake around in another attempt to reach the coast, following the previously found river's direction."
As seems usual with Max's expeditions our start was delayed by torrential rains, dampening our spirits somewhat"
"We eventually got underway to discover a small ravine had opened up, no doubt due to the rain, into which a curious bearer and his load of food immediately disappeared into. Will these chaps never learn?"
By day four we had discovered some unusually large bones, probably dinosaurs; encountered some natives that were not interested in us and I almost fell foul crossing some difficult quicksand - unlike another of our food bearers (stupid chap) who disappeared beneath the  surface.
No sooner had we reached the veldt than we were set-upon by a small group of hostiles, brave, but foolish chaps, I thought."
"Having dealt with the animal attacks and fool-hardy natives we arrived at  our destination near the lake whereupon we encountered a river, feeding the lake to our Southeast. Plans were of course immediately changed as Max decided to follow the river Northwest - rivers are, after all very important  discoveries [Editors note : For "very important  discoveries" read "most valuable cash reward"] . Hindering our progress however were yet another group of natives surprising us from both our flanks. 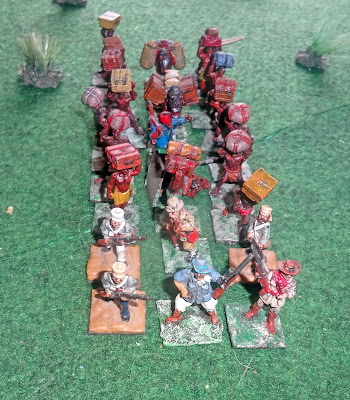 "The natives, despite their number were only mildly troublesome, causing little to no wounds, however slight, to our number. The snake that emerged from one of the huts was much more worrisome, having the ability to poison its victims. even so, I joined in engaging the creature alongside Horatio and whilst I survived two of its bites Horatio succumbed to the creatures bite and poison at the very moment he put his spear through the vile serpent.
Albert was immediately on the scene, the natives having long since dispersed, applying liniments and a poultice to draw the poison. The successful of his medications was soon realised as Horatio recovered sufficiently to be carried by one of the beasts or two of our bearers.
"As if I had not had enough of beasts for one day, the very next day I was singled out by some big cat or other but survived with little more than tears to my clothing.
"Over the next week or so, we had the usual discoveries and events, "interesting rocks", pygmies, a windstorm and so on, but we continued our journey along the river, until our bearers decided it was "Bad Juju" to continue heading northeast  wherein we diverted a bit, found a swamp and back-tracked on to our course, having picked up the river once more.
Archie's Birthday was greeted by giving everyone double rations (we still had 10 day's worth) and yet more new plants, jungle rot and some gold occupied our time so much that we were once more ambushed!"

"This group were quickly dealt with by fire  and bayonet and proved to be not the last encounter we would have on this expedition as with depleting numbers and food were made for home, though not by the most direct route I should add, Max being determined to explore "just a little out of or way" and it was at this point that we were attacked by slavers...
"The action was very costly to our dwindling numbers losing two bearers and all the food they were carrying, and a soldier .
It was up to me to successfully supply fresh meat for two days once the food ran out, before our eventual return to Jim's Landing"


It was a very long adventure, both in game turns (23 days) and the time to play it all out at a gentle ace took about four hours over three sittings iirc. Towards the end it was very tense as I'd really pushed the column before returning to Jim's Landing, with little room for error on the food front, though there was cash in hand and trade left  should we met anyone friendly to trade with. (we didn't) - we met slavers !
Despite giving trade to the slavers they were still hostile and are quite good at shooting and melee - I was so pleased there were not many more. The day after the Slaver fight, there more slavers, who after plying with trade , proved neutral to us and of course, low on food meant we got lost  too!

Because of the time the expedition was in the field, the river hexes, fights and some great loot Events the overall tot-up was a phenomenal $599 ! This is enough to give all four explorers another skill increase.


It was nail biting stuff and I enjoyed it !

I spent a lot of last week painting figures (another two units for the Sudan) but they're still only about 85% finished and I've spent a little time planning some new, very simple buildings and a rather larger build too.
I'll be going to my closest wargame show "Border Reiver" this coming weekend, so next week's blog will be about the delights of the show.

That's it then for another week, hope you found something of interest and as always your comments are both welcomed and appreciated.