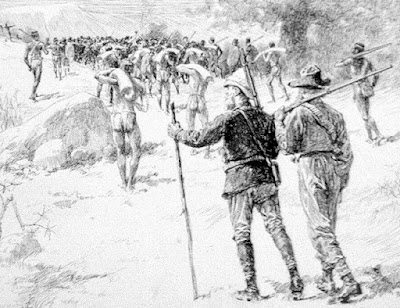 With an unprecedented burst of enthusiasm, I've
been doing a lot of preparation for more adventures into the wilds of "Jimland" ("where anything can happen").
The "Jimland" rules have been given most of my attention, even though there is nothing wrong with them to begin with. I've been heavily influenced by other, older, rules that went with into more variety for expeditions.
So what have I come up with?
Firstly I haven't substantially changed any of the original Jimland rules, but rather I have been adding to them , always with the thought that whatever I add must be simple and in a similar style.

A lot of the ideas come from the old Avalon Hill game "Source of the Nile" - an excellent game but overly complicated and not intended for miniatures.

Here's a few of the things I've expanded upon:

To expand the distances into the vastness of my Jimland map Ive added the ability of Missionaries, Doctors and the new Trader  to establish posts, all of which have slightly different uses. So expeditions have the ability to establish friendly places in Jimland, namely a Mission, a Hospital and a Trading post.
None of my changes and additions are game changing imho, as every benefit has a drawback, be though it slight.
It seemed strange to me that water wasn't considered in the rules, especially in deserts, so I added some very simple rules  for water consumption, but as they only apply in desert conditions then they would be enacted often.
Treasure is also mentioned in the rules, but never expanded upon so I've added rules for it.
Loot is considered as Treasure, but is a full load for a bearer, distinguishing Treasure as small items (10 to a full load), means an Explorer can carry more loot.
Caches are another simple rule I added (with most of the ideas coming from SotN), it's advantages are that bearer loads can be left in the wilds to be picked up later, but with a small chance that they won't be there on returning to it.

The  work on the rules has been (and is still) ongoing for a few weeks but I've also made some new Event cards. There are 100 cards in the game, but mostly for my own amusement I've added another thirty and have another thirty ready to photocopy, laminate, cut and corner (with my excellent corner cutter).
The new cards have the usual good, bad and indifferent ideas that help hinder or just give the players a decision to make.
(You may be able to make out some of the cards' script if you click and enlarge the photograph)


So when is the next adventure then ?  My games room is almost ready for use, the table is almost clear of debris and I have little more to do in preparing for another Expedition into Jimland. The rules are good as they are and I don't have to use any of the new ones, so I reckon in the next week I'll be back on track for a game.

That's it then for this week, I hope you've found something of interest and as always your comments are both welcomed and appreciated.
Posted by Zabadak at 05:15