This last week saw me make an attempt to show proof of concept for my Treasure Hunt ideas.
The rules were fluid, some being made up on the fly for things I hadn't thought of, but these were few and far between.
This will be a fairly long, picture-heavy post (sorry), as I try to show each step of set-up, some thoughts and the game itself.
The setup requires the playing area to be figuratively divided into a number of areas, with an equal amount horizontally and vertically.
Although I think squares are preferable, rectangular areas are also usable.
So for my game I imagined my area (approximately 40 x 40 inches square) to be divided into 5 x 5 squares, each with a side of of about 8 inches.
The very poorly done photoshopped effort shows (just about) how I imagined it.
I next put a plastic "bush" in the centre of each imagined square. for reference and although not 100% necessary, I found it useful.

Next up was the placement of the treasure hunt tokens(see here) that are the features that the clues are based on.
Placement can be done in any order, but for this trial run I wanted "Lookout Rock" in the central square. The others were placed by dice roll, with the proviso that only one token can be placed in each row or column.

I selected the first 'column' of squares and diced (1 to 4, avoiding the central row where "Lookout Rock" was)) to see where the "Rusty Anchor" would be placed .
I threw a '2' and thus placed it in the second row, removing the bush in the centre of the square
This was repeated for the remaining three tokens.
From the top row to the bottom row, then we have "the Lonely Grave"; the Rusty Anchor, "Lookout Rock"; "the Monkey God" and finally the "Rock Cairn" I also placed four small jungle pieces and three rough ground pieces randomly, then scattered all my 'grass' bits.


Next up was sorting out all the bits and pieces needed for the game;
Next up I laid out the twenty  Event cards in a grid representing the table, 1 per square, except for the four corners and the centre square.
These would be removed and acted upon as the crew entered each square.
The five pairs of 'clues" were shuffled and laid out in two piles, one containing North-South clues, the other East-west clues. One pair for each Treasure token.
All the  needed items were placed within reach and my crew put in their corner starting position. (I  would find out later I would need more)


The concept for this game was pretty basic, you initially get a pair of clues for the location of the first treasure; successfully digging it up gave you the clue to the second treasure, encountering a character may give you access to a third treasure or it could be reached by reading the runes on "Lookout Rock" (which took time).  (This was one of those instances where I was almost making stuff up as I went along.)
So before I could set off I needed a part of clues to where the treasure was. Taking a card from each of the treasure clue piles I got these two cards, shown on the right.
It was  one row up and on the fifth column from where we started, so quite a trek!


My crew's first move would be towards the Monkey God and although I would pass through three squares, it was fairly obvious to me that I would only trigger the Event in the Monkey God's square.

Taking the event card from that corresponding to the Monkey God square gave me this:
Having survived the spear trap, my crew headed east to the dig site, during which we would activate three Events. 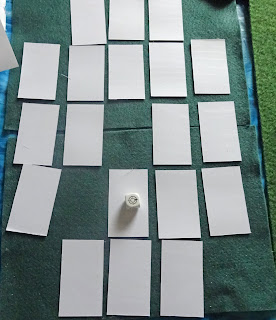 Next encounter:
So, with the crew once more intact we would head east towards the rough ground with the treasure site.

And that dear reader is where I'm going to leave it for this post as it's getting to be quite a long post as it is and I've got about as much again to post up.
As I was playing through I did think that it bore a distinct similarity with "Pulp Alley" games, though in those games the players know where all the plot points (read treasure sites)  are beforehand.

That's I then for this post, but maybe not for this week, as currently I'm intending to write up the rest of this scenario to post in Friday! This is quite a diversion for me, having two posts in a single week, but I also have a back-log of four "Jimland" adventures to post about.

Once more, thanks for taking the time to visit and as always your comments are both welcomed and appreciated.