So this last week, I haven't managed any painting at all and I can't blame the football either.
Instead of painting I however manage to fit in three games! Two were in Jimland where I took the part of the opposition for a friend's two Adventures into Jimland (I'll admit that I'm probably more shocked than anyone that I had a live opponent. The third game was a solo trial run through my Treasure Hunt pirate game. These three games certainly more than made up for my lack of a game during June, but his is the promised report from Edward Burlington's second adventure into Jimland, played solo in May.

From the Journal of Frederick Cartington

"Ned, with a slightly smaller budget, decided to take more food, but less bearers whilst still being able to afford the same firepower of our five soldiers."
"I gleaned that our objective would be to return to the mountain north of Jim's Landing, where we had previously discovered a river source"
"With good spirits we headed along the trail NE and across the river, encountering Natives that were ambivalent to our presence and encountering some Dinosaur bones that no-one could identify."
"Having crossed the river, we headed NW into the grassland beyond, a food bearer  was lost to the heat and just as two of our soldiers were recovering from a slight case of sunstroke we were engaged by half a dozen hostile Slavers" 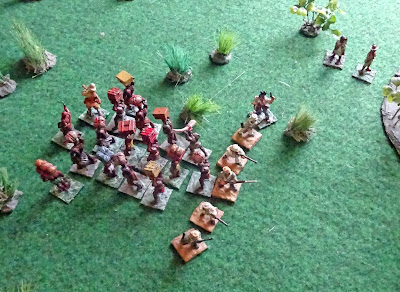 "With Ned's usual style of having all the weapons to the front of the column the bearers (and Doc) made for safety whilst everyone else formed a firing line to the rear."
"Ebor and I went off to a flank and we poured on fire as the Slavers attempted to close to combat, supported by their rifles"
"The action was brief but we saw them off with no casualties on our part."

"In good spirits we headed NW once more into grassland, but a fierce lightning strike struck down one of our bearers, this was followed the next day by torrential rain, preventing further progress"
"When we got going over the next several days, we lost a bearer to bad water, (his load of food was also ruined); and four loads of food were also found to be bad"
"So, after a mere six days in the field, we were reduced to 3 day;s worth of rations and Ned decided to head home the next day"
"The next day saw us eat our last rations as the remaining two loads of food were also found to be bad"
"Once more we reached the river crossing where I successfully hunted enough fresh food for an evening meal".
"Our spirits were uplifted slightly as we knew were were only a day away from the safety of Jimland and a decent meal. This euphoria was brought swiftly down to earth by an ambush almost as soon as our column set out."
"We quickly saw off these rogues to the loss of a single soldier and returned to Jimland without further incident"
"With such bad luck the expedition arrived back at Jim's Landing a beaten force. Ned was murmured to have bungled the whole thing."
"With so little land explored and only a single find, I do wonder if another expedition can be launched."
"We shall wait and see"
In game terms the expedition wasn't too bad, as all the explorers survived, but the points scored were few and far between, a mere 117 points total, hardly enough for a decent expedition. I'm in two minds whether to continue with Ned's expedition, despite its lack of funds, or sack Ned and start a new expedition!

That's it then for this week, next week I'll probably be posting about my experimental Treasure Hunt game, the mechanics of which proved very successful imho.

As always thank you for taking the time to visit and your comments, of course, are both welcomed and appreciated