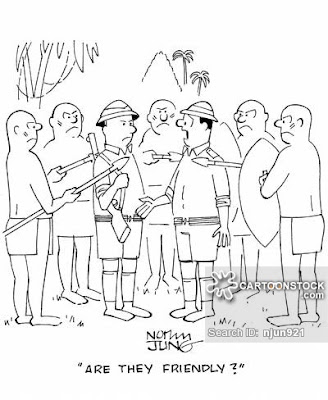 I was lucky enough to entice my mate Benoic (Ben for short) into visiting me for a game of something or other and as I had "Jimland" all ready to go he chose to chance his luck in the depths of adventure.
Ben had read a couple of my own adventures, so had a general understanding of the rules and plumped initially for a three man party, led by a prospector, "Edward Winsor" (he chose to name his characters, as mine, from the streets where he had lived in the south).
So with $317 in hand he led an expedition of three explorers, the leader (Prospector), a Scout (John Coalway) and a Hunter (Mark Phillips), a soldier, five Askari and nine bearers (all laden down with food), he set of along the south-east coast from Jim's Landing into "Terra Incognito"
So rather than give a blow-by-blow account of his adventure , as I have done, here is a picture account of his first expedition.

Through, heat, an animal attack, a mysterious disappearance and a poisoned plant, the column is swiftly depleted after a mere three days."
Only the Hunter a an Askari survived the debacle in the swamp, but could things get worse ?
Well, yes they did, the Askari was found to have fled the next day having heard drums in the night!
After being lost in the swamp,  on his way home the now leader of the expedition and sole survivor, John Coalway successfully made his way home.
So with his return to Jim's landing, his less-than-successful adventure was over, but Ben had seemingly thoroughly enjoyed it., so much so that he wanted to undertake another adventure immediately. (which, of course, I was happy enough to do

So that's it then for this week, needless to say I had fun playing against a real-life opponent as the natives and I'll report of Ben's second adventure in Jimland next week.

Thanks for taking the time to visit and as always your thoughts,  questions and comments and greatly appreciated and welcomed.