Getting a title for this post was very difficult as I haven't managed to do one single thing hobby-related in the last week or so!  The exception being my post last week and taking a few pics of a box I found.
Everything in this post then has been the result of things I've done in April (no fooling).
I did manage to get in another Jimland Adventure with the intrepid Frederick Cartington at the fore and and he was so 'successsful' in his last adventure he could now afford to have Soldiers rather than Askari accompany him into the wilds of Jimland, hence the photograph above. They're figures from my collection of Indian Mutiny forces painted many years ago, hence the different bases (currently my 'Slavers' are from the same source).
I did realise, too late to post last week however, that I'd omitted the map from Cartington's last adventure, here it is (just in case you weren't already bored).
The map shows the route and would have enabled you to follow his last adventure a bit better (possibly, maybe, who knows?) 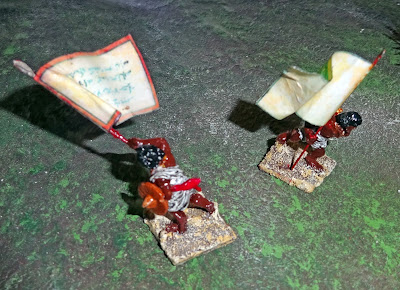 With my Sudanese Fuzzies finished I noticed that I'd inadvertently swapped two flags around so I 'fixed' this by stripping the flags, replacing them with the correct coloured ones, spray-varnished them outside.  Subsequently  I forgot about them, left them overnight whilst it rained. The photo shows the fairly washed out look the flags have now (I don't mind as it gave them a bit of character!) outside.


I also finished the 120 Arab types for the Sudan, way back at the start of April. Rather than the spots etc. on the backs of the figures' bases these units are almost uniformed with their patches coloured in pairs (eg. Black and red for one unit, red and blue for another etc.).


As the figures can have two or three patches on an arm, one, to or three on their front and one or two on their sides, the number of colour combinations  are sufficient to allow no two figures in a unit are identical.
The Leader figures are all based on the same sculpt, 'bloke pointing' and are easily spotted.
Their flags are a random assortment, but including some blue ones, taken from the same source as the Fuzzies' flags i.e. Warflag.
Like the Fuzzies, they've been put into storage, sadly, probably never to seethe light of day again, let alone a wargame table.
I did wonder why I had so few guns for my Sudan and came across these, which in addition to the two other field pieces, would bring my artillery up to a reasonable level.
As artillery is almost an  essential  for the allies when dealing with the Dervish and I have about 10 or so four figure gun teams  I was delighted to find this box of wonders, whilst looking for some model fences I made a while ago,
It had the long lost artillery that I'd wondered about and more besides.
They were obviously bought for my Boxers, but are equally at home in the Sudan.

My paint tray looks like the picture on the left and is in need of repair...

So I had to revert to another tray (piece of wood) for my current painting efforts.
I gathered together as many of my boxes, barrels and other stuff that I've been accumulating over the last few years and decided to paint them up, There are items from Ainsty, Col. Bill's, some home made and 3D cast  things amongst the various bits and pieces.
Whilst I may not have done anything this last week, I still have another adventure to write about, but next week I'll probably be showing some new terrain I made in April as the adventure writeup, photo editing etc. is far more time consuming.

After a week where I lost the Interweb thing for most of it, it's good to be able to post comments on  the various blogs I follow ( I think I'm finally caught up), as currently it's the only real social activity I have hobby-wise. I think I was having some form of withdrawal (and maybe it accounts for any lack of hobby progress)

I also noticed that ALDI have similar green mats in store at the same price (£6.99) as the Lidl ones and appear almost identical, the link should take you straight to it.

So that's it then for another week, I hope you've found something of interest here and as always your comments are both welcomed and appreciated.