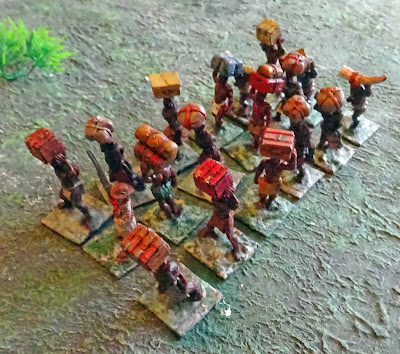 In last week's post the expedition led by Frederick Cartington was reduced to himself and seventeen bearers, following an ambush by 9 hostile "Tribals" and whilst he may have food to feed himself for two hundred days in the wilds of 'Jimland' he is still several days from safety with only his trusty rifle and stiff upper lip for protection.

Herewith then, the final chapter

From the Journal of Frederick Cartington, in Jimland: (continued)

"Swiftly burying our dead, I decided to immediately head for the relative safety of Jim's Landing, some four days' journey.. We once more continued South following the river, looking for a suitable camp site when cries from the rear of the column alerted me to yet another native attack. I immediately took up a defensive stance whilst ordering the bearers to safety, the sticky mud of the stream not helping. The Natives were few in number and I soon saw them off".
"What a day yesterday was, but we picked ourselves up and made good progress going SE through familiar terrain, encountering a few Natives that ignored us- for once! One of the Natives also pointed out an unusual plant - I pretended interest."
Almost as soon as got going, we were again attacked in the rear whilst once more crossing a stream. Same routine, I took up a defensive position in cover overlooking the extraction of the bearers whilst the Natives descended upon our rear"
They were, of course, no match for my sure aim and the sacrifice of a bearer bringing down one of the attackers with his final breath"
"Our bearers' sacrifice delayed the natives long enough for me to shoot down two of their number, sufficient to make them flee"

"Making our way to the North-east and the trail that would finally lead us back to Jiml's Landing we were once more surprised by a force of that most dreaded opponent - Pygmies, both to our front and right, rear flank and once again, whilst we were crossing one of those irritating streams so prevalent in Jimland."
"I gave the order to flee even though I was stuck in that damned stream mud!"


"Escaping to the cover of the dense jungle, I picked out two of the Pymies' lethal darts from my flask
and Bible and made my way to the rendezvous point awaiting the arrival of the rest of the expedition."
"Of the seventeen bearers, only three showed up and none of these carried a load of food!" I had gone from having over three months of food to zero in a matter of moments. I did try to hunt for food but I guess the ruckus we had caused scared off any potential game!"
"With rumbling tum, my three bearers and I made a swift, uneventful return to Jim's Landing, passing the more,  by now, almost obligatory  ruins."

And with the very great threat of the pygmies, (who couldn't hit the legendary barn door - and even when they did Frederick Saved!) and the remarkable dice rolls that saved the expedition right up to the last , when Fred needed a two to a six on a D6 to survive being without food for a day.

It was a nail biting finish to the expedition and on points scored the most successful to date! (well over 500!).

That's it then for this week, next week I'll be posting about some of the things I've also been doing  - (other than the recent additional expedition in Jimland!).