I've had a very busy week,but not all for the right reasons. A clinic visit and a consultation with my consultant (surprisingly enough), which all cut into my hobby time.
Despite all the intrusions into my hobby-time I did manage to get my mandatory hour-a-day painting in on both my Sudanese (sword hits and second base colour) and three units of Allies have now all been, based and undercoated.
In addition I finished off three more figures I'll be using in 'Jimland'.
In one of my job lot of recent buys I got three Egyptian rank and file and because they weren't carrying packs they were very quick to paint. I do intend to add four units of Egyptians (each of twenty figures)   so these were a nice practise run and will be used As Askari .
From the photograph above you can see that they've already had a run out in the Warton -Cartington expedition which I also played last week, but you'll have to wait until next week for the report. Needless to say I enjoyed it for all sorts of reasons. 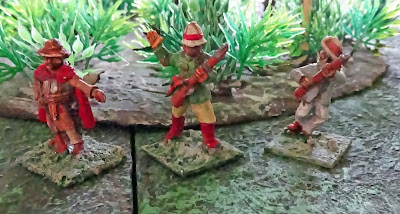 For getting older I received a new camera, which I'm my cameraman is still getting used to. so you have been told!
The three guys on the right are (from left to right)
An Irregular Mini figure of King Menelik II, though how I came into possession of it goodness knows!
Centre figure is, I believe a Foundry figure quite possibly the only one I possess and once more his origin is a mystery. The last figure is an Old Glory Boer, included with the job lot I've previously mentioned,
None of the above three were involved in my latest adventure in Jimland. I have still been working on the rules for Jimland but was unable to put into practice any that I've finalised (though they all need play-testing).
Next week the Sudanese will be organised into their twenty-man units and have some detailing added
to them on a unit-to unit basis,
I had hoped to get them all finished by the end of February, but I'll settle with having at least one unit finished!
Quick mention for the white undercoat spray I used - bought from Wilko's - cost £3.95 -  I've manged to spray over well 400 figures not and it's still not quite empty!
It gives a really delicate coat to any figure without losing detail - well worth a try imo.
That's it then from me for this week I hope to get the write-up for the Warton -Cartington expedition into Jimland done by next week, but my week-end is booked for real-life endeavours.

So that's it then for this week I hope you found something of interest in this rather bland post and as always your comments are both welcomed and appreciated.
Posted by Zabadak at 11:25