From the Journal of Henry Warton
"With the modest funds we received  for our efforts in the disaster that saw the demise of Sir Charles, the Rev  and Dave the prospector, we  still managed to put together an expedition of myself, Frederick, six Askari and nine bearers with enough food for the eight of us for 11 days."


"Our plan was to make a simple circuitous route that meant we were never more than two, or at most three, days from Jim's Landing." 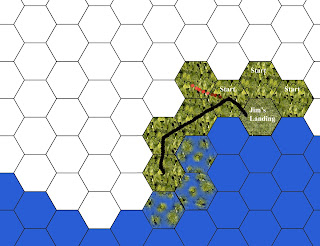 Day One
"Travelling NW from our now well acquainted camp we encountered a friendly village and discovered a new plant species. I said it was a type of Orchid, whereas Frederick thought it to be of the rose family. As expedition leader I plumped for my own  version of the species"

Day Two
"Following the plan our route SW led us into a horrendous windstorm, which took away one of most laden-down bearers, I believe the 'friendly natives we encountered had taken whatever they could from his body before we managed to retrieve it"

Day 3
"As we continued SW we left the sticky heat of the jungle to climb the rather more affable slopes of a mountainous area. Unfortunately one of our Askari fell ill and died, blame lay seemingly with the brackish water found in his water bottle. Later we encountered yet more friendly Natives warning us of the water hereabouts."

Day Five
"Leaving the mountainous region behind us we descended into a very pleasant veldt, deserted, save  for some more friendly Natives, I assured Frederick that, despite his reservations, they were not following us"


Day Six
"Drums in the night spooked our Askari, one of whom fled to goodness knows where.
I decided that because of our losses we wold curtail our original plan somewhat and turn North-west, taking us into yet another mountainous region wherein we encountered a village of ambivalent natives.


Day Seven
"After another night of drums to which seemingly now used to, , we once more descended Northeastwards from the mountains  into yet more Veldt and came across a river. I thought it Tan in colour, Frederick thinking it more brown/ I named it the  River Tan.
Hardly noticeable on the large expanse of the Veldt were a group of most hostile pygmies who endeavoured to spoil our day, though I had espied them earlier than they would have liked and prepared our group for action."

Day Eight
"The veldt, the river, the descent from the mountain and the pygmy attack had obviously disorientated me and I declared another "rest day", without giving the reason why."

I going to leave it there for this week, not because of any other reason than to have something to post about next week ! (Sorry). As an added excuse, I'm also sitting in a fair representation of an freezer, as we have a plumber sorting out our bathroom and a heating engineers is due tomorrow to fix that problem too. I did manage some hobby-related painting last week - my first complete Sudanese unit which should be finished in a week or so, if my fingers ever defrost !

I have been unable to access a computer for most of the last weekend and will be trying to catch up on all your blogs asap.

There wasn't much to write about with this adventure, but it was a lot of fun from my point of view, but any questions or queries about the game, the way I've written it up or anything else, as always your comments are both welcomed and appreciated.
(and I don't know why this last bit is blue as it doesn't look that way on the draft version)
Posted by Zabadak at 08:41