So, following on from my regained piratical interest, I've dug out the three ships that were intended for my  first foray into 'pirate' wargaming. Bear in mind that these ships were all modelled about sixteen years ago and haven't really seen the light of day since then, save for a quick 'filler' post on this blog that can be seen here "Pirates-versus-zombies?"
They're pictured from left to right in ascending order of completeness, the one on the right featuring in the above-mentioned post.
Time hasn't been that unkind to them and other than gathering dust, they've faired pretty well in their forgotten state.
The first model shows the very crude building technique I used. The base is polystyrene foam, carved and filed to shape even if a little too pointy for the time  (period (1700's). The main hull sides being very thick (but softish) cardboard that would have planking inscribed into it.
All the other bits for the sides, back  and front-end decoration (I know all the technical terms) were added using a slightly thinker card. The base of the ships was covered
in wall filled and filed flat, so they are a little heavier than expected, but they are solid! Deck planking was achieved using the then equivalent of coffee stirrers (tapers), cut to size and glued in place directly onto the polystyrene (if memory serves). The deck hatches are all 'plastic canvas' and  edged with stirrer scraps, as are the windows in the back end (the blunt end for those technically minded). The ladders are scraps of plastic and masts and spars are all dowels of various sizes.firmly embedded into the base, I used some bbq skewers for railings and other 'trim' 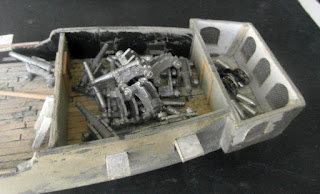 I did wonder where my stock of cannon for this vessel had been , but all was revealed when I 'opened up' the cabin at the back, as can be seen in the picture.
The windows for the back cabin were the grating we all use for fences, from auto-repair work.
Doors, iirc were simply etched onto the card with coffee stirrer frames, unlike the first model where I'd left the doors as merely holes.
On this model the front cabin-space bit was left as a solid piece and the roof doesn't come off!
My attempt at some form of decoration on the blunt end can be seen in the photograph, as can the card-framing of the windows in the rear cabin.
The second model was in a far more advance state than I'd recalled (a pleasant surprise) and has a few more bits of detail worth pointing out.
There a few extra side railings, a balustrade (of sorts) embedded in the rear  and another balustrade-type thing on the upper rear deck. These were all made, more or less,using the same technique of cutting bbq skewers to a length, then filing the top to make a peg that fitted into previously drilled holes and glued into place. The protruding bit of peg was then cut off and filed to shape.
Masts,  as said previously were solidly glued into place using filler and pva.
The rear cabin was left as one large space for ease and you can just make out that in this case I used plastic canvas once more, this time for the windows, as can be seen in the next photograph of the back end.
The etched planking can just about be made out on the rear-end photograph too, as can my feeble attempt at some decoration - prominent on nearly all ships, from what now I gather

The third ship (and the one most nearly in usable state) has three decks in the rear of the ships, all of which can be accessed.
No doors have been added to this model and I can't remember whether this was done on purpose or that it was yet again something that needed to be done.
The most awkward part of this build was the placing of the rearmost mast, as this would have to come down though the bottom cabin roof.
The 'problem was solved by a small part of the upper mast protruding beyond the deck bottom and a sleeve into which the upper part of the mast would fit, making a very solid 'join'
Most of which should be fairly obvious from the photograph, I hope.
The separated three decks can all be seen on the photograph to the left and the assembled rear of the ship can be seen in the photograph below (again with a little attempt made at adding some decorative detail.
The front end cabin and deck grating can be easily made out, as can the very steep stairs to the upper front deck - made purposely so as to accommodate more figure space on the main decks.
Whenever I've made models I've always thought to accommodate figures first before the aesthetic look of the model (and yes I know it shows).  Therefore you won't find many of the normal fixtures and fitting associated with, in this case, ships. So, no capstans, anchors or the like (and I wouldn't know where to fit them in case), though I do have a steering wheel on each vessel as I did think that this was a fairly important addition. 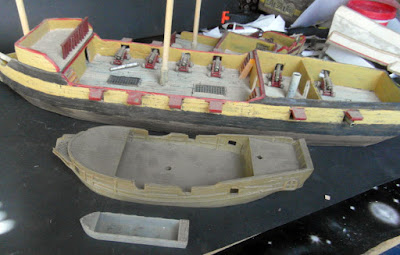 I also remembered that I do have a commercially model, bought back when I could afford to do so.
It's a resin model (very brittle) I think I may have bought from the now defunct 'Village Green', but is likely available from other sources.
From the photograph you can see it is dwarfed when compared to my own scratch-build vessel, but is nevertheless usable and even in its current state is what's known as a fixer-upper.

The very small boat-like object may be familiar to some - it's a pontoon from the Airfix pontoon bridge set, sadly a little too narrow to fit any figure with a 20mm or large base, but could (at a pinch) be used for scenery.
The resin model came with a hoard of metal bits and pieces (no guns), which will take time and research to find out what they are and what they do.

That's it then for this week, I'll be looking unearth and dust off my pirate collection to post about next time.
Thanks for taking the time to visit, whilst I indulge myself in some nostalgia and of course your comments are always welcomed and appreciated.
Posted by Zabadak at 05:52