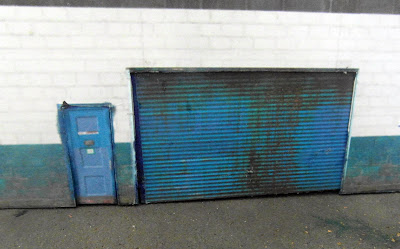 OK, so it's not really a roller shutter as it doesn't roll and it's removed to show when it's opened.
it's the final gap in my model of "the street" I'd been working on which came to a grinding halt not just because of Xmas but also because of a backlog of printing that I needed doing.
Nearly four years ago (yes, four years!), when this model was started I did have all the external walls and fittings printed but with the passage of time several bits went missing.
Over the holiday period at least these two pieces have come to light and whilst they may be slightly curled, they have retained their original colour and are very usable.
A this would be an easy fix I set about installing the new finds into the model
It was a very easy job that I still managed  somehow to make more difficult for myself.
The gap between the outer and inner walls was far slimmer than I would have liked and the gaps at either side of the door where the door would 'drop' in were a bit too narrow too. It left about 5mm either side of the door and would need a very thin piece of card.

The mainstay of many a conversion, the cereal box was used for the door itself and was carefully cut to size until if fitted snugly into the gap of the main building.
Once I was happy with the fit I edged the card with blue felt-tip as there would undoubtedly be some of it showing in when the two door sides were fitted to it.
having edged it with felt tip it made the marking on the card (to centre the door) almost impossible to read, but nevertheless it was done.

Carefully lining up to the inner and outer faces of the door was a bit of pain but the final effect was well worth it as very little of the blue edging showed through.
Slotting in the door is a bit tight, as I wanted, but not so tight as to scrape the outer or inner printed pieces when this was done. (vast amounts of glue and burnishing may well have helped).
And that was it, in all it only took about an hour to fix the new roller shutter to the back of the "Blue Sun" general store excluding glue drying time and door "flattening" time.


That's it then for this week, not much I know, but nevertheless something.